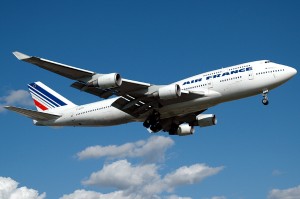 Business Class is just not what it used to be anymore. Earlier this month, five passengers were robbed of over $5,000 on an Air France flight from Tokyo to Paris. It was a red-eye flight and many passengers were in a deep sleep.

One passenger lost about $4400 and is the one that notified the flight crew. When the plane landed in France, police were waiting, but the thief was not found.

It is the airline’s policy to be responsible for luggage, but not for personal items, including cash, that passengers bring aboard. It might seem odd that someone would bring so much cash on a flight, but a one-way Business Class ticket on this flight can cost around $7000. Comparability that would be like me bringing $94 cash on a $150 one-way trip from Seattle to New York, which doesn’t seem so bad.