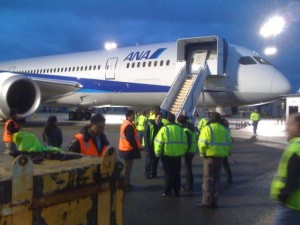 ZA002, the second Boeing 787 took to the sky today, showing off its ANA livery. Unfortunately I wasn’t able to make it to this flight, but there were others who saw it first-hand. Check it out if you missed it live:

ZA002 had some issues with its front landing gear during its first flight today. Check out the Seattle Times for what happened to the gear and about one of the chase planes almost running out of fuel.