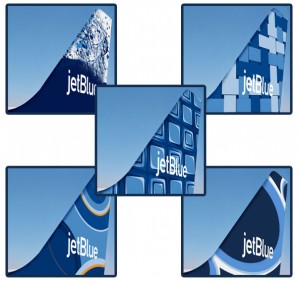 These are your five choices. Click on the image to go to the voting page.

JetBlue is about to celebrate its 10th anniversary on February 11, 2010. To get the party started, they asked employees to design a new tail fin livery that will be unveiled during the celebration. JetBlue has the same livery on the body of all their Airbus A320’s, but each one has a unique tail design.

JetBlue had to go through a lot of great submissions, but narrowed it down to the top five shown on this blog. Now you can vote and the highest ranked one will start flying sometime in 2010.