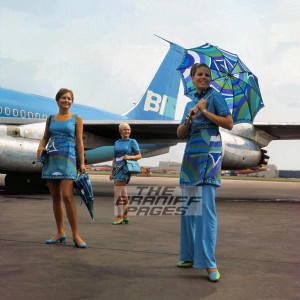 Braniff International knew how to do it right!

My mom (Jennifer Brown) loves to support my blogging efforts, but she isn’t the biggest fan of aviation (well she LOVES birds, but that is a whole other story). A lot of our conversations about airlines comes back to how everything was different when she was younger and that “my generation just doesn’t understand.” She is kind of right. Sure I can read the history books and look at the old video and pictures, but it is not the same as being there. She has written for the blog before and I invited her to talk a little bit about her experience with flying. Here is her story:

My first flight was in 1962. I was 14 years old and my family was flying from Denver to Indianapolis via Chicago. But that flight was not my first experience with flying. My dad was a businessman who had to fly often. The rest of my family would take him to the airport and that was an adventure in itself. Back then in the late 50’s and 60’s, you never just dropped someone off at the airport. Of course there was no security. So we would all go in with him, walk to the gate, watch him walk across the tarmac to the plane (no jet tunnels back then). We would watch him climb the stairs to the plane, waving madly. Then after he was on board, we would hope he’d have a seat on the terminal side of the plane so we could wave some more. You never left the gate until the plane was in the air and a mere dot in the sky. Often we would have dinner at the airport-a true family outing.

Those trips to the airport made me long to fly! How exciting it would be! However, back then flying was rare for middle-income families. It was mainly for business or the rich or emergencies. In fact when I took take my first flight in 1962, it was to be with family at Christmas because my mother had died.

During the 60’s and 70’s, I probably did fly more than most people for various reasons. And now that I can look back on that time and compare it to now, I have noticed some differences.

One difference was that there were not many choices. If you wanted to fly from point A to Point B, there were usually only one or maybe two airlines to choose from. There were also fewer flights. People were also loyal to airlines. If you wanted to book a ticket, you had to go through a travel agent or sometimes actually go to the airport to pick up your ticket. Airlines didn’t have 1-800 numbers and of course no Internet to check for deals. There were no deals.

The first deal I ever remember was in the late 60’s. I think it was Frontier Airlines who had a half-fare stand-by for students. At the time, my sister and I were in college in Colorado and would fly to St. Louis where our dad lived. It was perfect for us, so we used to race down to the Denver airport, hoping we’d get on. Otherwise, we’d have to drive across the plains. I used to count the windows of the plane, multiply by four, and then count the people at the gate to figure out if we’d make it. We always did!

Flying was an event-not just a way to get to a destination. People who flew dressed up-no jeans or T-shirts. I still cannot wear jeans when I fly. The stewardesses [Gosh mom they like to be called “flight attendants” now 🙂 -David] were all young and pretty. It was a high status job and many young girls aspired to being one. The food service had real food on real plates and silverware and was included in the fare.

I know there have been a lot of changes to flying since then. I think most of the changes started in the 80’s when deregulation of the airlines began, but I’m not an expert.

I think we all know what it’s like to fly now. To me flying is no longer an adventure but an ordeal. I think that passengers nowadays are driven more by the price of the flight instead of the ’œexperience’. And the consumer usually gets what they pay for.

It’s a shame we’ve gone away from these halcyon days, but it’s a see-saw. On one hand, service has really gone down, but on the other, so have prices. On another see-saw, people now treat and are treated like they’re on public buses, but on the other, they get visit far flung family and friends more often.

For the same inflation indexed price, you can still travel in a style similar to these days of yore, but it’s called first class now. Or, you can pay a lot less and still get to your destination, but in a lot less style..

In Australia, non travellers can still go to the gate for domestic flights, which is nice. They still need to pass through security, and I don’t think that is going away any time.. but it has only been in place domestically in Australia since 1991. I still remember the days when you could just walk up to the gate too. I don’t think the world has changed that much, but I think people’s acceptance of risk just isn’t the same.

I totally agree-it is a see-saw. I do think what people want more now is to get to their destination as cheaply as possible. It’s almost a game to try to find the cheapest rate. And that’s fine. I guess what bothers me a bit is how they then complain about the lack of amenities. You just can’t have it both ways!

I really enjoyed this post. Your mom really sums it all up in the last line when she says that passengers are driven by price. In a nutshell, this is what has caused service to suffer. Airlines can’t keep up stellar service at bargain basement prices. My dad was a Pan Am pilot throughout the 60’s, 70’s and 80’s when the industry was regulated and so I was a frequent traveler and it was truly an enjoyable experience. People even dressed up to travel! Now, as an international pilot, I agree that it has become an ordeal for many people. People build up anxiety just thinking about taking a trip. In fact, overcoming anxiety and fear of flying is the theme of my blog.

Been following your blog for 3 days now and i should say i am starting to like your posts.

really I genuinely such as your current declare continue throughout the tidings I will probable pop in a lot of several other motive to start sense a few a lot more merit per ton.

Keeping them safe while they are using the net
is always an issue. Although your friend may find the comment hilarious, your
prospective employer, teacher, youth group leader, or in-laws may not.

This basic guide to kids’ games online for free
will help you discover the right games for your kid.