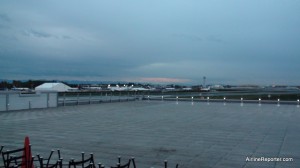 https://www.airlinereporter.com
Jetstar Denies Boarding to Blind Passenger and Then Takes Away a Wheelchair
Mom Tells How Flying Used To Be
8 Comments

This is not nearly as cool as I was hoping — The title implied that you might get to fly on the aircraft itself.

Normally there are a lot of instruments and barrels of water on the first flights. Probably wouldn’t be as exciting as seeing it on the ground 🙂

I have helped build the DREAM(LINER for Three years now, from Everett to Wichita Ks. I would love a chance to see the First Flight. Lets hope for a cloud free day and a Safe Flight for our Test Pilots. And I’m not ashamed to ask for the LORDs Blessing on the entire 787 project

Oh yes. I think most people don’t realize how much there is left to do after the first flight before the plane can be delivered. There is still a lot that can go wrong. I just hope nothing else goes wrong!