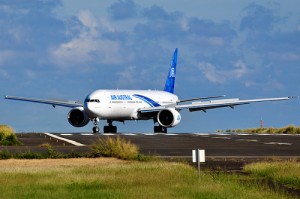 Source: Today in the Sky Image: Paulo974
Air AustralAirbus A380

Not for me thank you

Wow, after a flight on this even RyanAir would look like a luxury liner!

Presumably they will be using gates that have dual jetways? I’m always amazed when I travel through an airport like Burbank, or San Jose’s old terminal C, where you (still) board jets using stairs. It’s really remarkable how fast an airplane clears out when you can exit either from the front or the rear. It wouldn’t seem like it would make that much of a difference — people still have to stand up, put their shoes on, wait to reach the overhead bins, etc., but it really, really does. In a situation like this, if you have 2 doors active at the same time, with two aisles available, dunno, it’d be slow but not outrageously slow. If they’re only using one jetway, though…ugh…forget it!

hai i am design engg

Hello to every one, the contents present at this web site are in fact awesome for people knowledge,
well, keep up the good work fellows.