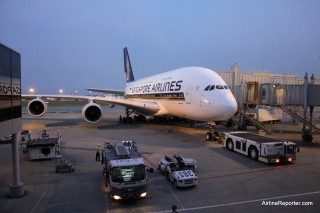 I am pretty big guy, around 6’1″ and 250lbs or so, which means I can truly appreciate a larger seat with a little extra room. Most business class seats do a great job of making me feel comfortable, but Singapore Airlines business class seats border on insanely big. They have a seat pitch of 55″, which is nothing to write home about, but they also have a seat width of 34″ — which is almost three feet. To compare, the international business class seat width on Lufthansa’s Airbus A380 is 20″ and All Nippon Airways Boeing 777-300ER has a respectable width of 21″.

Singapore’s business class seats are arranged in a 1:2:1 layout, meaning every seat has access to an aisle. That eliminates having to trip over a seatmate in the middle of the night to use the restroom. Unfortunately I was not able to catch a window seat to or from Singapore, but with all the available in flight entertainment, who really needs a window anyhow (okay, I was disappointed, but it worked out). 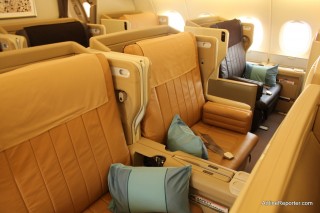 When taking a 20 hour flight twice in one week, there needs to be a decent collection of entertainment. Singapore Airlines came through, giving each passenger easy access to a better-than-average selection of movies, tv shows and music all on demand. You are able to recline back and still easily view the 15.4″ screens.  I did end up having a few issues during my flights, where the entertainment system would tweek-out and restart on its own or cause my movie to stop for a bit. This happens to be a common occurrence since I have a knack of causing entertainment systems to crash. For some additional fun, there were quite a few “real” game options that you can play with other passengers, like Tetris and Battleship, but never got around to trying them out. 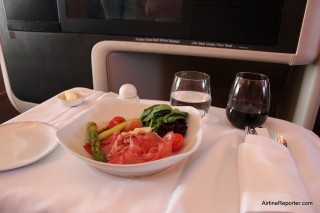 If you decide to sleep, you risk missing a meal or two — which would be a shame.  Because of timing, I enjoyed three different dinners on the way over and two lunches and a dinner on the way back. My first meal started with parma ham and ginger-infused pear, char-grilled vegetables and balsamic dressing. Then the the main entree was seared beef fillet with port wine sauce, mushrooms in spice cream and dessert was New York cheese cake ice cream with cherry compote. Yes, a lot of fancy names, but it actually tasted quite divine.

Just when I thought the formal meal was done, here came a cart with cheese on a cutting board. You tell them what you want and they will cut it up, served with fruit and even  a glass of port. Each meal has multiple courses and by the time the cheese cart rolls around you are pretty full.  If for some reason you are hungry during the down times, there is still a “light bites” menu available, where you can get anything from noodles, to sandwiches to even a Krispy Kreme doughnut (only from LAX to NRT).

If you are feeling a bit more adventurous there is also an Asian option including seasoned kelp, grilled fresh water eel braised in egg and pike eel roll with kelp.  I normally love trying different food, but was not in the right mood. It is always nice to have a drink while dining and if you become thirsty, no worries, you have eight pages of drink options to choose from including the classic Singapore Sling. 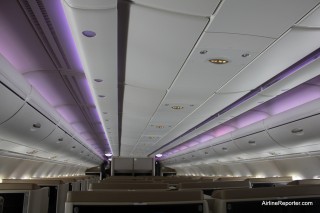 ï»¿ï»¿ï»¿ï»¿ï»¿ï»¿ï»¿Singapore Airlines is very proud of their Singapore Girl brand of service and on board my A380 flight there were 23 flight crew. Something I didn’t notice on the way over, but learned while in the Singapore Airlines Training Center, is that the flight attendants have different ranks. Although their uniforms have similar designs, there is a variation of color based on seniority. The majority of men and women serving you will sport the color blue which is entry level. Green are the lead flight attendants in charge of a section and reds are chiefs in charge of each deck. On the A380 there will be one person in charge who sports purple. It became a game to try and find one of each color (hey, it is a long flight).

This is a new flight for the airline and was started on July 1. Singapore Airlines also operates a non-stop from Los Angeles to Singapore using an Airbus A340-500. Why would anyone take the longer trip with a stop in Narita? First, the non-stop flight (SQ37 and SQ38) is the second longest flight in the world and takes about 18 hours. That is a long time to be locked in a aluminum cylinder and some people might be willing to make the trip longer to have the ability to split up the trip with a short stop in Narita. Also, the non-stop flight only has business class seats, so if you are looking to fly first class or economy, the A380 flight is a must. If you are flying business class, the A380 product is similar, but the seats are wider compared to the A340. Probably the most important reason for airline geeks is the ability to fly on an Airbus A380 vs a more common A340. 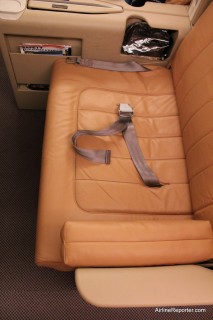 Los Angeles becomes the eighth destination in Singapore Airline’s network to operate the Airbus A380. They were the first airline to operate the world’s larges airliner in October 2007 and they have clocked around 128,000 flying hours on more than 13,000 flights. The airline currently has 12 A380s in service and seven more on firm order. It is definitely worth the extra time to try out the A380 product and if you are flying economy, you still have a shot to fly on the upper deck.