Air New Zealand is in the midst of refurbishing its Boeing 777-200ER fleet, and is showcasing the planes’ new Premium Economy and Economy Skycouch seats during a North American ’œPleased to Seat You’ tour.

The seats are on display in a 26 foot, 5 ton, glass-walled truck that will cover more than 7,000 miles, giving the public a chance to see and sit in the -200’s new seats. The airline introduced the innovative Skycouch in its Boeing 777-300s ’“ the footrest in a row of three seats can be positioned at the same height as the seat cushions, giving a flexible space for passengers.

With the update of the -200s, all of the long-haul aircraft in Air New Zealand’s fleet will include the Skycouch, along with the new Premium Economy seats also found in its Boeing 787-9s. 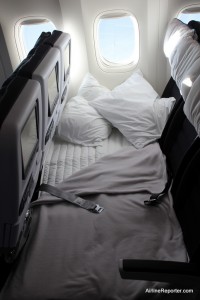