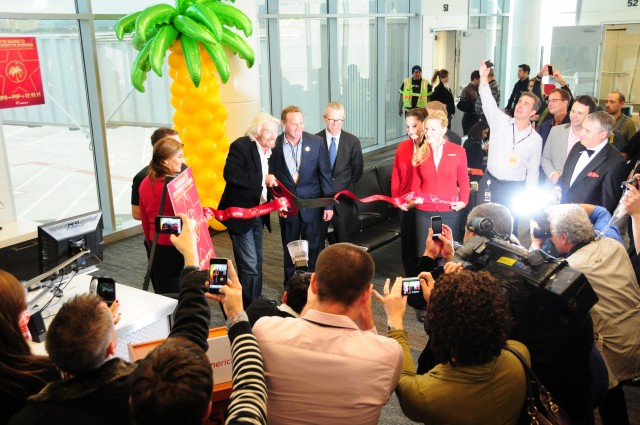 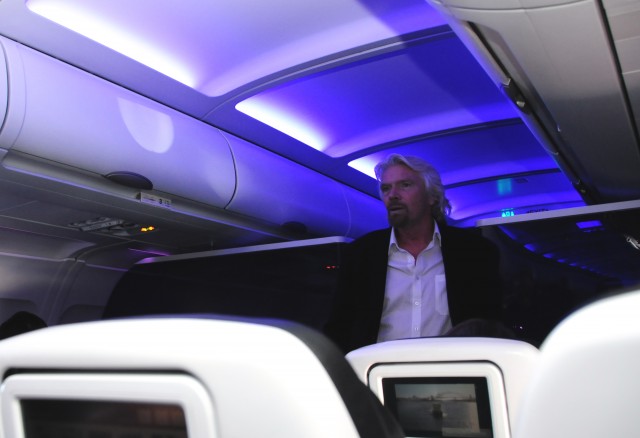 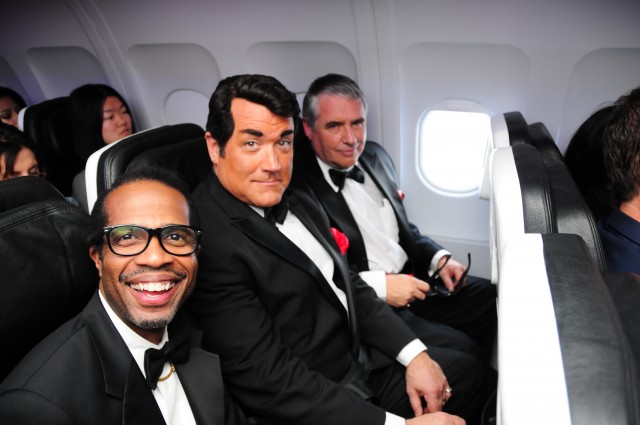 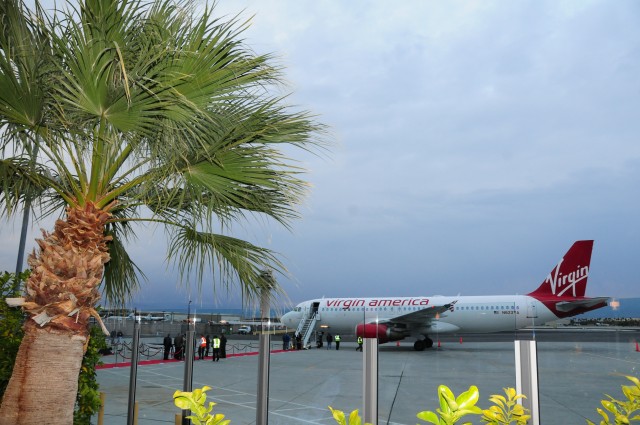 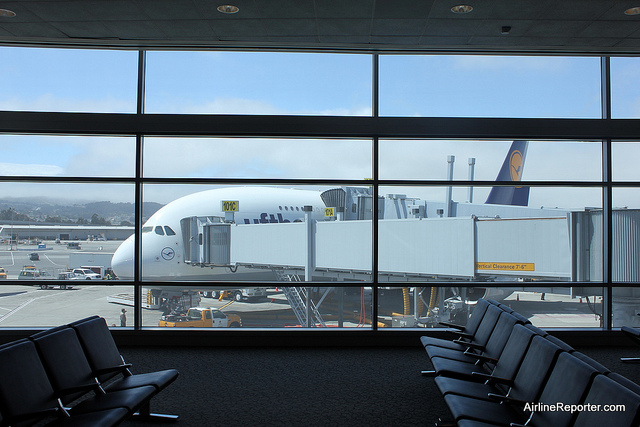 Lufthansa's Airbus A380 waits at SFO

Yesterday, San Francisco International Airport saw their first passenger carrying Airbus A380 arrive, operated by Lufthansa. Once all the passengers were able to de-plane and the aircraft was cleaned up (this was the first time that the SFO based cleaning crew cleaned up an A380), media and guests were able to take an inside look at one of Lufthansa’s seven Airbus A380’s.

I was excited, since this was my first time actually inside an A380. I had only seen one previously from the tarmac and of course I have viewed lots of photos, but there is nothing like getting inside the world’s largest commercial airliner. 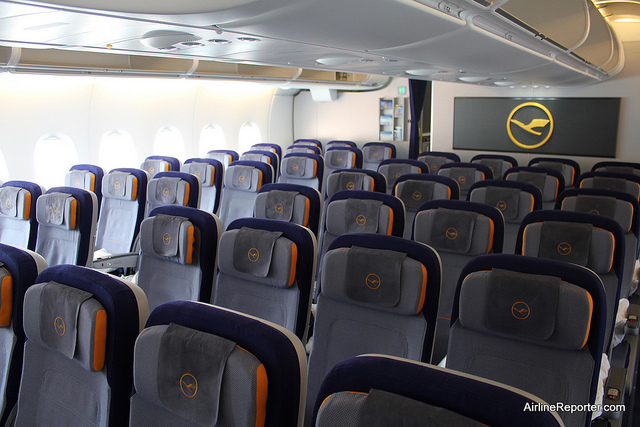 The economy class seats on Lufthansa's A380 look slick and are pretty comfy to boot.

Due to the A380’s size, there are three jetways options that passengers can board. Two are located on the bottom deck and one goes to the top. The tour started on the bottom where all 420 economy seats are located. Even though the bottom deck is long, but it doesn’t feel it, since it is broken up into individual sections. Every seat has their own in-flight entertainment system, adjustable headrest and ample legroom. Sitting in the seat, I was plenty comfortable for the three minutes I was there. Not too sure how my 6’1″, 250lbs frame would handle 11 hours if I had someone sitting next to me. 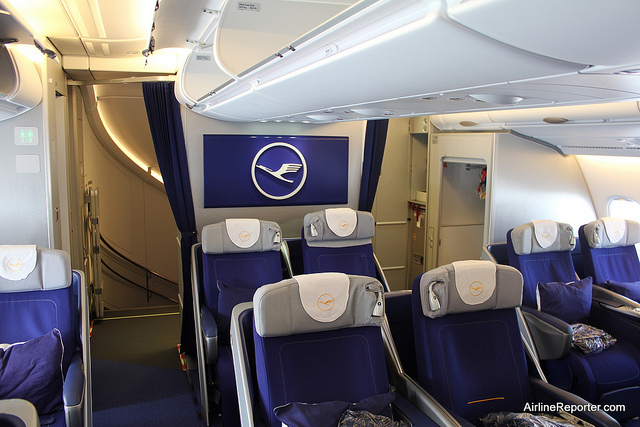 All the Business Class seats can be found on the upper deck of the A380.

On a longer flight, I would prefer to head up top where you can find 98 Business Class and eight First Class seats. One of the first things I noticed were all the seats on the aircraft were cloth. In most Business and First Class areas, one is more likely to find leather. This didn’t make the seats any less comfortable and most likely would reduce sliding when converted into a bed. 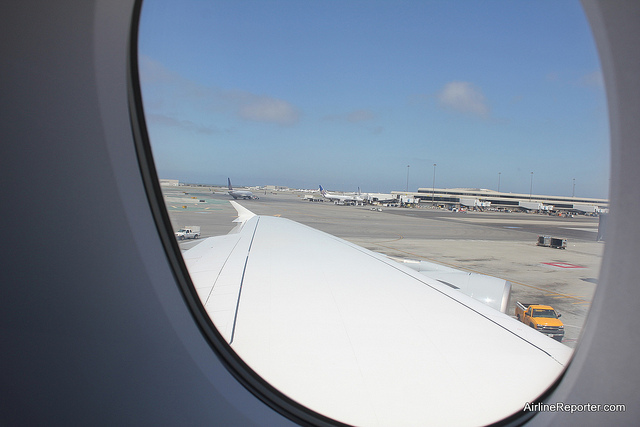 While on the upper deck, I took a look at the Airbus A380's massive wing.

While up on the second deck, I had a chance to sit down and take a look out the window. The Airbus A380 has one frek’n big wing. These large wings have 54% more surface area over a Boeing 747-400 and you can tell. 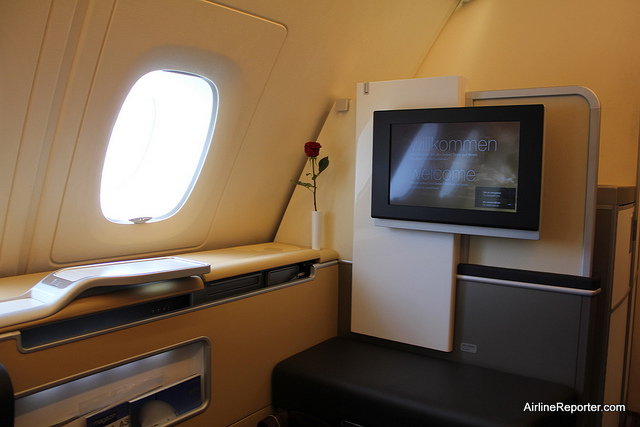 The new Lufthansa First Class has ample room and a large screen. I could easily burn 11 hours happily in this section.

The new Lufthansa First Class on the A380 was quite impressive. Each person has their own area, with large screen and fold down bed. The walls were covered in suede (or fake suede) and extra sound deadening is used to keep the sound to a minimum.Â The First Class cabin also has access to two very large lavatories. We are talking full sitting couch and vanity. If you ever wanted to join the mile-high club, this would be the place to do it — even all that extra sound deadening might help.Â From forks to roses, Lufthansa’s catering crew loads on 40,000 items for just the First Class passengers alone (yes, 40,000). That just goes to show the level of service that flying First Class provides. 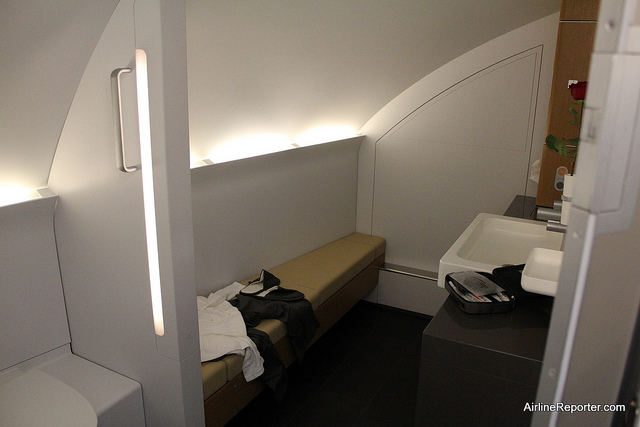 This is one of the lavatories in the First Class section. Can anyone say Mile High Club?

One thing you will find missing in the first class section are overhead bins — they are missing. Instead each seat has a storage area where passengers can store their belongings. This really adds a sense of upward space and makes the First Class cabin that much more comfortable.Â Even though the Business and First Class areas are what you might expect, it just doesn’t feel as exclusive on the top deck of the A380 versus the smaller top deck of the Boeing 747-400. 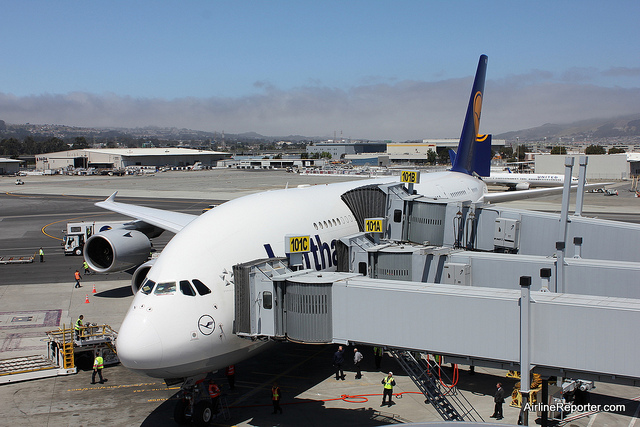 This is the first time I have seen three jet ways be used to de-plane an aircraft.

Although the A380 looks impressive pulling up to the gate, it is missing some of the grace that the Boeing 747-8 Intercontinental has in my opinion. The Airbus A380’s job is not to win any beauty contests, but to provide airlines with an economical way to move a lot of people in style and it does just that.Â After my tour of an A380 I am super pumped to get a ride in one and hope to write up a trip report soon.

For those of you who have flown in an Airbus A380 what have been your impressions?

CHECK OUT THE REST OF MY PHOTOS ON FLICKR

Lufthansa's Airbus A380 (D-AIMD) gets a water salute when arriving to San Francisco on May 10th.

Today was a beautiful day to fly down to San Francisco (SFO) to greet theÂ Lufthansa’s first Airbus A380 passenger flight from Frankfurt, Germany to SFO.

The Airbus A380 is the largest passenger airliner made and it’s closest competitor will be the Boeing 747-8 Intercontinental, when it makes it to the market.Â I have been able to catch a glimpse of a Qantas Airbus A380 while in LAX, butÂ this was my first time to get up close and personal. I do not think the A380 is as majestic as the Boeing 747, but she is very impressive for sure.

The event is a big deal for the airline and the city. San Francisco Mayor Edwin M. Lee hasÂ officially declared May 10, 2011, as Â “Lufthansa German Airlines Day.” Pretty cool when an airline gets an official city day. I am not sure it really means anything, but still neat.

The airport had to makeÂ very little updates to prepare for the A380, since the International Terminal was designed withÂ the A380 in mind and it fit with no problems.

Lufthansa already has taken delivery of seven A380’s with an additional 15 on order.

As part of the event, we got a tour of the interior of the A380 and I will be posting that story tomorrow. 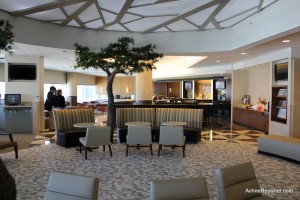 When walking in, you can tell this club is different.Â  StraightÂ in from the door is a sitting area with (fake) trees that feels like you are sitting at a cafe at some square in San Francisco. The colors, the furniture and even the fire place “captures the spirit and culture of the city,”Â Nancy Knipp, President of Americanâ€™s Admirals Club explained to me while we sat under the trees. The club is designed to let passengers know that they are in San Francisco.

There is everything you would come to expect from a high-end lounge: lusciousÂ seating, free Wi-Fi, businessÂ center, bar, showers and free snacks. Having your flight delayed or being early is no big deal when you can hang out in this lounge. 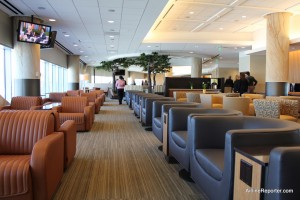 The new club is a huge improvement from their old one at SFO –Â literally. The new club is about 95,000 sq feet and can now seat 165 people versus the 90 of the previous club.