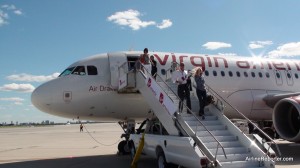 Virgin America is known for providing a unique level of service at a competitive price. However, they haven’t been known to make a profit. With today’s announcement, that has now changed.

When Virgin America first started up, many questioned if an airline with so many frills at a time of cutting back, could survive in America.Â As the airline kept growing, other airlines started to take notice. Could an airline with an attitude, awesome infight entertainment and competitive prices really survive against the establish carriers?

Today, Virgin America announcesÂ they have made their first profit ever, a total of $7.5million during third quarter. Now, $7.5 million is not huge a profit compared to other airlines, but it is sure a heck of a lot better than losing money. To compare, Alaska made $118.1 million, Delta made $363 million and United made $473 million. Those are some impressive numbers, but I don’t think such huge numbers make VA feel any less proud about making their first profit.

â€œAs a young airline fueling growth in a tough economic climate, weâ€™re exceptionally pleased with our performance to date,â€ said Virgin America President and CEO David Cush. â€œAlthough the revenue climate improved as a whole during the quarter, our unit revenue performance still outpaced much of the industry. Our progress toward profitability in just our third year of operations remains impressive, especially given both a global recession and a historic run-up in oil prices since our August 2007 launch. The credit is due to a growing base of flyers who expect more from an U.S. airline â€“ and our teammates, who continue to deliver the best service and product in the industry.â€

Virgin America has great momentum. They aren’t stopping with just making profit; they will continue to grow. They plan to expand to Dallas-Fort Worth (starting in December 2010), Los Cabos (starting December 16, 2010) and Cancun (starting January 19, 2011) along with order for an addition 40 new aircraft with options for an additional 20. If Â larger airlines weren’t taking Virgin America serious before, they better start paying attention.