What comes up, must come down. After being in the air, flying over the Olympic Peninsula and heading over towards Mount Rainier, the Boeing 747-8 landed at Paine Field in Everett, WA a little after 4:15pm today. The day started foggy and we weren’t sure if she would take off, but it turned into an amazingly sunny and clear day. I would imagine Boeing got some wonderful pictures of the 747-8 flying today. Hopefully they will share soon.

PICTURES OF THE BOEING 747-8 LANDING 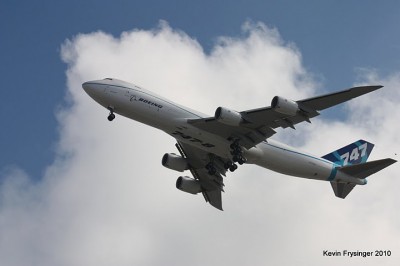