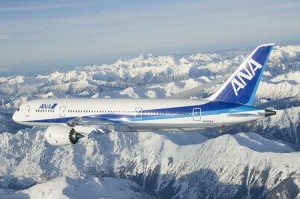 Boeing 787 Dreamliner ZA002 with ANA livery, flying over the Olympics

Yesterday the second Boeing 787 test plane, ZA002, made its second test flight back to where it was built. The flight was from Boeing Field (Located in South Seattle) to Paine Field (located in Everett, WA).

The flight was required since there was debris found in ZA002’s fuel tank after its first flight on December 22nd. Paine Field and it needed to fly back to Paine Field, which has the proper facilities.

VIDEO:
KING5 caught video of the Dreamliner taking off and the Future of Flight braved the rain, dark and wind to see the ANA liveried 787 land.

The issue is minor and it provided people up north to see the Boeing 787 fly once again (Unfortunately I was at another blog-related event).Â  This incident is not changing the positive mood of Boeing executives. “The 787’s progress has exceeded my expectations for where I thought we’d be at this point,” Dennis O’Donoghue, who runs the company-wide aircraft testing unit, told Bloomberg. “I’m almost giddy.”

And I am giddy too. This means I will have an opportunity to see ZA002 take off from Paine Field when it heads back south again.

Additional Information:
* Photo of ZA002 back at Paine Field via @ImperfectSense
* More photos of ZA002 over the Olympic Mountains vis Seattle PI