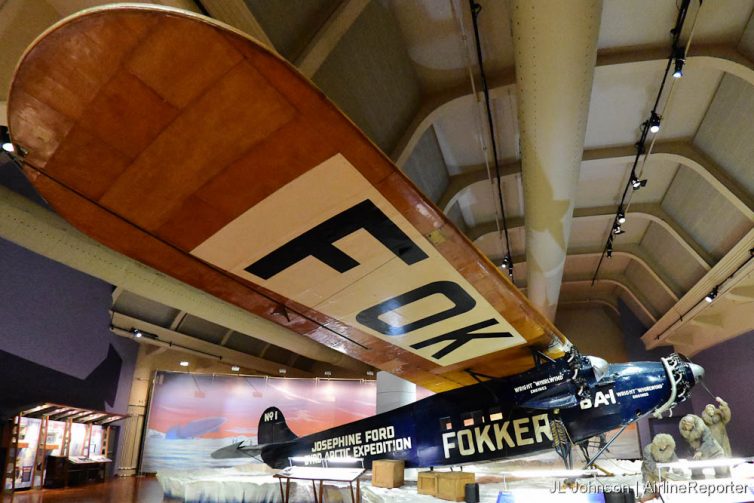 I recently found myself in Detroit for three days thanks to one of Spirit Airlines’ ridiculous airfare sales combined with my favorite Spirit tip: Actually going to the airport to buy tickets. At $38.41 round trip, how could we resist? While I can honestly say DTW was not anywhere near the top of my to-do list, I go where the sales are. All literature regarding tourism in Detroit pointed to one definite venue: The Henry Ford. I knew Ford was influential in many early forms of transportation besides the obvious one, so I gave it a shot. For AvGeek appeal I expected an exhibit on the Tri-Motor. What we got was so much more.

During my recent visit to Oshkosh, I managed to secure a ticket to fly in the oldest aircraft I have ever stepped onboard.  On a grey and cool Tuesday morning at Oshkosh, I hiked from the main gate over to the Warbird Alley flight line to line up for a scenic flight onboard ’œLittle Ford’, a 1929 Ford Tri-Motor (Model 4-AT-E).

Little Ford (NC8407) was built in 1929 and was frame #146 from the Ford Aircraft factory.  Sold to Eastern Air Transport (later Eastern Airlines), it served for three years before heading over the Straits of Florida to operate for Cubana on its new Santiago de Cuba to Havana route.  Before returning back to the U.S., it served as presidential transport for the Dominican Republic as well.  During the 1950’s, the aircraft was upgraded with higher-horsepower engines, becoming the most powerful 4-AT ever flown.