During my recent visit to Oshkosh, I managed to secure a ticket to fly in the oldest aircraft I have ever stepped onboard.  On a grey and cool Tuesday morning at Oshkosh, I hiked from the main gate over to the Warbird Alley flight line to line up for a scenic flight onboard ’œLittle Ford’, a 1929 Ford Tri-Motor (Model 4-AT-E).

Little Ford (NC8407) was built in 1929 and was frame #146 from the Ford Aircraft factory.  Sold to Eastern Air Transport (later Eastern Airlines), it served for three years before heading over the Straits of Florida to operate for Cubana on its new Santiago de Cuba to Havana route.  Before returning back to the U.S., it served as presidential transport for the Dominican Republic as well.  During the 1950’s, the aircraft was upgraded with higher-horsepower engines, becoming the most powerful 4-AT ever flown. 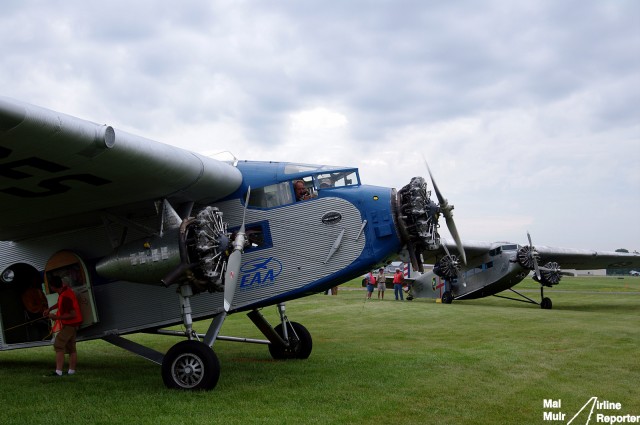 Little Ford became a crop duster and a barnstormer before a fateful 1973 day.  While at the EAA Fly-In (later to become AirVenture), a thunderstorm caused the aircraft to rip away from its tie downs, raise 50ft in the air, and land on its back.  Its life seemed over.  EAA purchased the wreckage and set about to restore the aircraft; in 1985 it returned to the air.  In 1991, the aircraft started its new life, operating joy flights for paying customers all over the USA, keeping them entertained and thrilled with the thought of flying on this vintage aircraft.

As I sat and waited for my turn to fly on Little Ford, the volunteers spent some time chatting with guests prior to our safety briefing.  The briefing included the usual tips such as how to operate your seatbelt, or what to do in the event of a crash. It was locating the emergency exits that drew a small chuckle from most, as one of them was located in the roof. Not something you usually hear onboard modern aircraft.  Little Ford landed from its last flight, and it was our turn to board. 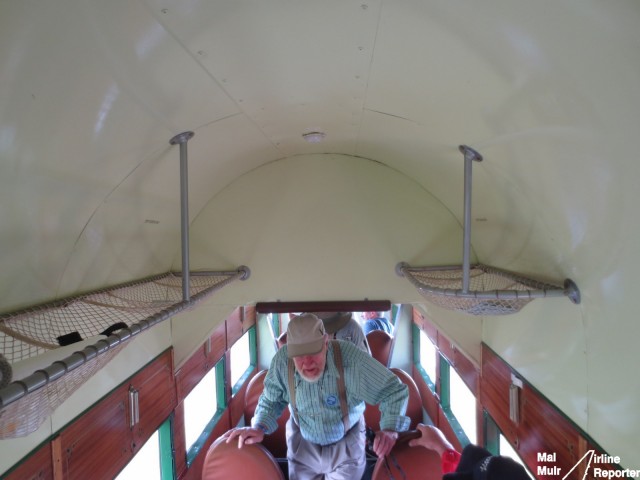 Hopping onboard the Tri-Motor sure did bring a shock; I didn’t expect it to look so spartan inside.  Harking back to a bygone era of aviation, I felt like I was inside an old railway carriage, not an aircraft that flew people around the USA.  The wood panels and fabric netting ’œoverhead bins’ really made you feel like you were flying a vintage aircraft – Boeing Sky Interior it was not!  I was too busy taking photos and tweeting them out  to realize what was going on (yes, mobile phones were allowed onboard and service was quite good at low altitude); next thing I knew the pilots were starting the engines for taxi. 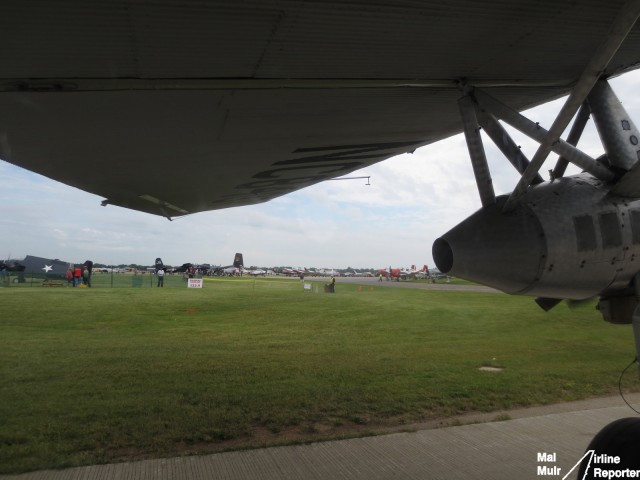 As we taxied out to the main runway, it was very weird to be looking up towards the cockpit at such a steep angle.  With the Tri-Motor being a ’œtail dragger’ it was slightly disturbing seeing the outside ground not level.  One thing I did like was the corrugated aluminium body and the way it made you feel as though you were back in the golden era of aviation.  Climb out was powerful, yet not all that noisy for a radial engine (not my first flight on a radial-powered aircraft), and pretty soon we were at our cruising altitude. A very low cruising altitude. 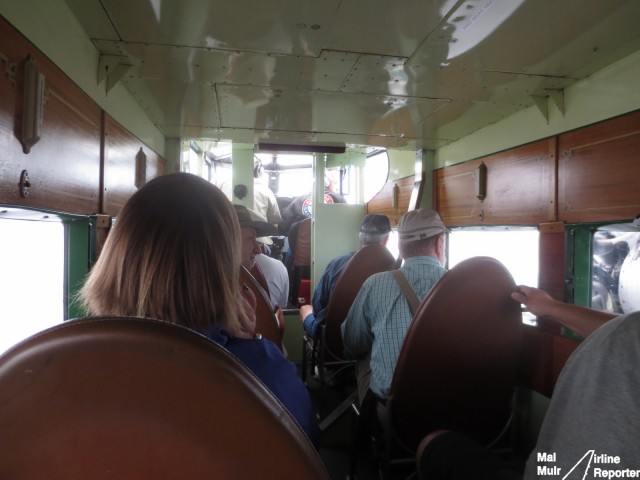 Onboard the Tri-Motor, which feels and looks more like a railway carriage with the bare metal and wooden paneling               Photo: Mal Muir | AirlineReporter.com

The flight was only scheduled for about 10-15 minutes so really all we were doing was heading out over Lake Winnebago, turning back towards OshKosh Airport just south of the field and coming back into land.  It could have been an hour for all I knew, as I was having the time of my life.  We were cruising along and it was surprising just how insulated you are from the sound onboard.  It wasn’t as noisy as I expected, although you would have to of used a raised voice to be heard when talking. The seating, while basic, was comfortable enough, though spending hours on one of the more modern Slim Line airline seats would be preferable. 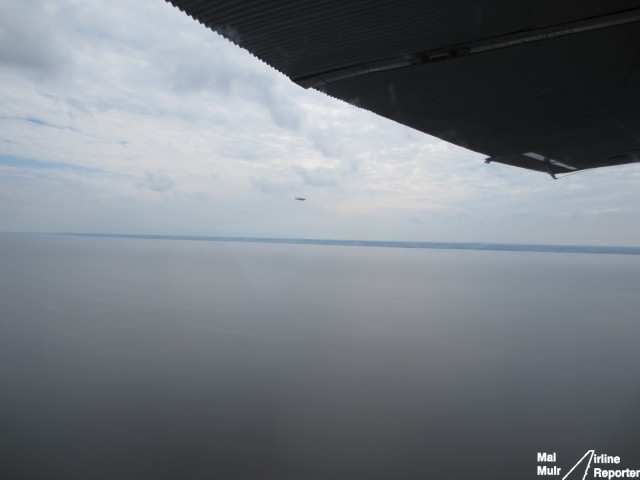 Two Ford Tri Motors in the Air at one time (yes that little spec out there is a Tri Motor) – Photo: Mal Muir | AirlineReporter.com

About halfway through our flight Big Ford, the second Tri-Motor doing scenic flights, joined us off our left wing and I could just imagine this sight to those on the ground.  Two vintage Tri-Motors flying as though it was the 1930’s would make any AvGeek drool. We turned back in towards Oshkosh and the short flight was all but over.  As we slowed back down for final approach, we were set to land quite far along the field and once we touched down, the asphalt gave way to grass.  It was the first time I had ever landed or taxied on grass, and it sure wasn’t smooth.  Within moments we were back at the parking area, ready to take on another group of passengers. 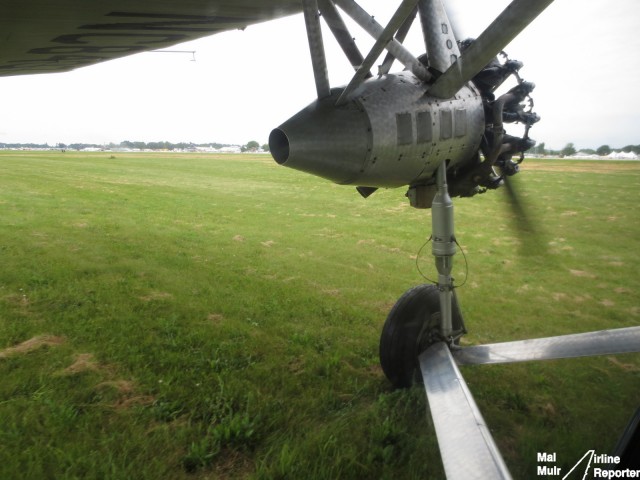 Landing on the grass sure does make for a different sensation – Photo: Mal Muir | AirlineReporter.com

Flying in the Tri-Motor was a great experience, and for the $75 price tag, it certainly was good value.  Not often you can get scenic flights of the same duration for such a small price.  Add in the fact that this aircraft is one-of-a-kind (one of only 12 left in the world, still the most powerful 4-AT) and it was money well spent. 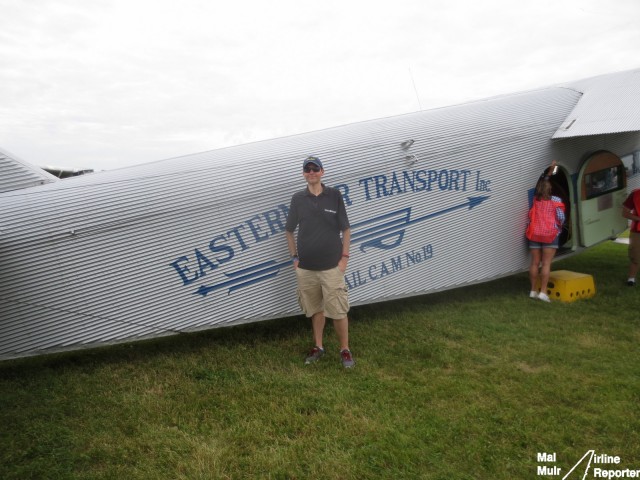