In the unlikely event you have a very crazy flight, these flight attendants are making sure you will be prepared. 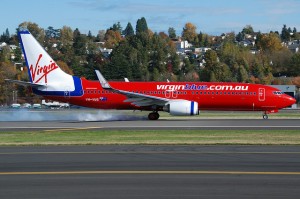 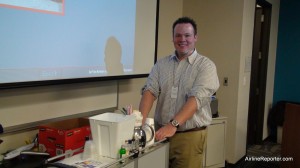 That's me, trying out the service cart. Not as easy to handle as it looks and I really should have a second person helping me.

The last two days I have talked about how flight attendants at AirTran learn a lot about safety. Luckily most passengers will never see the safety training in action, but they will see in-flight training in action on every flight.

Flight attendants provide a welcoming environment for passengers and can be the only contact a person has with an airline. Nowadays,  with being able to buy tickets and check in online then go right to the gate, passengers don’t interact with other airline employees that often. This means a smile and a positive attitude can go a long way. Sometimes it can be difficult to smile after having a long day and dealing with difficult passengers.

Being a server at a restaurant can be a challenging job. You should try it at 30,000 feet, locked in a rocking cylinder with over 150 customers. It might just look like flight attendants come down the aisle and give you a drink and some peanuts, but it is a bit more complex than that. The process of getting passengers their drinks and snacks starts when the airplane pulls up to the gate. 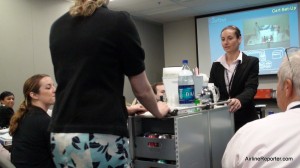 Practicing pushing the cart in the classroom.

While passengers prepare to board, the catering company will load stocked service carts on the plane. Even though catering companies do a great job of properly loading the carts, it is important for flight attendants to double check. Could you imagine what would happen if there wasn’t any ice on the cart? Passengers would start a riot.

After it is confirmed the carts are properly stocked, it is time to start taking care of the Business Class passengers. The folks up in the front of the plane pay a premium and get the benefit of being offered a drink before the flight takes off. They also receive a higher level of service.

During boarding, it can be a juggle for flight attendants. They welcome people boarding the plane, take orders from Business Class, fill those orders, keep up with the announcements, help passengers find their seats, and work with the overhead bins. There are three flight attendants, but it is a lot to get done before the plane is ready to leave. 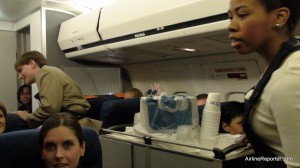 The flight attendant working the front of the plane also needs to make sure they keep tending to the Business Class passengers and pick up any trash before take off.  This can be a challenge weaving through boarding passengers.

After trash is picked up, a flight attendant’s job turns back to making sure the passengers take off and reach cruising altitude safely.

Once the plane hits 10,000 feet on AirTran, you can hear the pilot say, “Flight Attendants, departure check.” It is time for the flight attendants to prepare for the flight service. At this time they will also announce that electronic devices can be used. Getting the cart safely out of its housing and preparing it can be quite a challenge, since the aircraft is only at 10,000 feet and still rapidly climbing to around 30,000.

AirTran’s drink selection is quite vast, which means drink orders can get a little more complicated than just “Diet Coke please. ” Since there are so many alcoholic options, the flight attendant also becomes a mini-bartender. 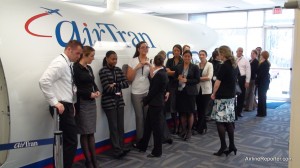 The Newbie Flight Attendants wait outside the mock Boeing 717 to be boarded for their fake flight to no where.

In the training, the flight attendants learn some of the most commonly ordered alcoholic drinks. Luckily they don’t have to make anything too complex, but they want to know what a screw driver is when a passenger asks.

Most AirTran flights have two alcohol kits which holds 70 small alcohol bottles each. Flights to Las Vegas will have three kits, since more alcohol is consumed on those flights on average (and probably need more aspirin for flight from Las Vegas).

Even though there is plenty of alcohol aboard the plane,  flight attendants are trained how to respectfully tell a customer that they have had enough to drink. We often hear or read about some passenger getting unruly and it being directly related to alcohol. The high altitude and dry air of the airplane can make passengers feel the affect of alcohol much quicker than on the ground. If a passenger has too much to drink, flight attendants don’t want to create a situation with a drunk and angry passenger by bluntly stating a passenger is too drunk to drink more. Instead, they are trained to politely suggest another type of (non-alcoholic) drink or hint that it might seem the altitude has affected them a little hard. 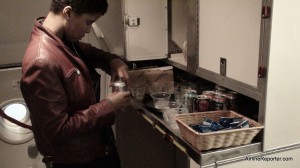 Getting cups with ice ready and opening drinks you know will be popular (ie Diet Coke) can save time!

There are also specific rules on how to ask passengers if they want a drink. Ladies in a row will be asked first, then passengers in the window seat, middle, and aisle seat last. The plane will be served from the rear of the aircraft to the front. These are things that most people would never notice, but it is something every flight attendant must be aware of  (probably the ’œmagic’ of in-flight service will be ruined a little since I will now notice all of these little things). 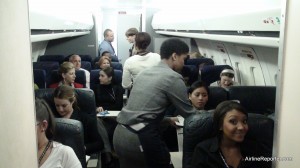 The inside of the mock Boeing 717 with new flight attendants waiting to be served.

Flight attendants must also be aware what time the flight was scheduled to depart. If the flight was scheduled to depart before 10am, that means they are to give out AM snacks and after 10am means passengers will get PM snacks. That seems easy enough, but when you are traveling all over the country or even the world, it can get a bit more complicated.

If the flight is short, there will only be one service, but if the flight is longer, there can be a few services performed in the main cabin. Once the first is done, flight attendants must start to prep for the next. It can be tedious work, but it keeps them busy and out there connecting with passengers.

Learning all of this in the classroom was helpful, but trying it first hand is much more important (and more fun). After a few hours in class, we all headed down the hall to the mock Boeing 717. Being in the mock aircraft seemed to be every one’s favorite (I know I liked it and I got to play with all the buttons). The newbie flight attendants got to practice all their speeches and in-flight service procedures. They actually served real drinks to other classmates (no alcoholic ones), but I was too busy running around getting photos (something that would most likely get me in trouble in a “real” plane) I didn’t get to be served a drink.

I was impressed with how complex just one day of in-flight training was and have a new respect for flight attendants. From what I saw, it looks like AirTran will have a great batch of new flight attendants who should be taking to the skies in the next few weeks, as well as be ready to greet you with a smile!