If you haven’t caught this video yet, it is a must see. Every airline has a few maxi-pads on board and one creative flight attendant, Heather Poole, came up with 20 interesting ways you can use one.

I talked to Poole about her inspirations for making this video. She told me that she has heard stories of her co-workers using maxi-pads to stop a passenger’s bleeding, for shoe padding and for soaking up condensation. Hearing these stories made her think, “man, we’re a pretty clever group of flight attendants. I should write something about this.” And that she did.

She started with the first ten and some of the crew asked what she was up to. When she told them about her plan, they kicked things into high gear, game up with 20 great ideas, broke out the ‘ol flip video camera and got to work!Â Not only is the video awesome entertainment, it can also bee seen as an educational video. Poole told me that people have emailed her saying they’ve put some of the ideas into action.

“Another person mentioned that one day at work an office coworker started bleeding, he thought of my video, and ran to the ladies room for a maxi pad! I saved the day,” Poole told me. Â She also had a passenger recently who was upset that red fuzz from the airline blanket got on her white shirt and she had and important meeting. Poole handled it like a pro, “I smiled, entered the lav, and said, ‘I have got an idea.’ It worked. The passenger was thrilled.”

I was curious how many maxi-pads were destroyed in the making of the video. Amazingly only three. Two for mopping the floor, and one for everything else. Now that is resourceful!

You can catch Heather:
* On her blog Another Flight Attendant Writing
* On Galley Gossip on Gadling.com* On Twitter 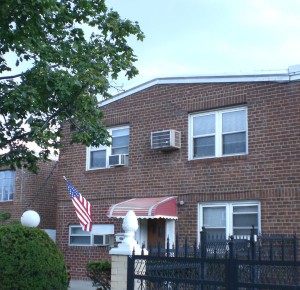 View of a crashpad in New York

A lot of people in the in the business will know what a “crashpad” is, but most on the outside might have no idea. If you envision flight attendants and pilots travelling around the world staying at the best hotels, you would might be surprised to learn that most of the time they are staying at a crashpad.

So what is an airlineÂ crashpad? As it might sound, it is a place where airline employees can stay cheaply. A lot of crew do not live where they are based. For example, in this interview, Shelby lives in Texas, but it based out of New York. This means she must make the commute from DFW to LGA and have a cheap place to “crash” while waiting for her next flight. Depending on the type of crashpad, people can have their own bed and space. OthersÂ  share a bed and having almost no private space.

To learn more, I interviewed Shelby (be sure to check out her blog), who works for a major US airlines. She has been working as a flight attendant since 2001. Here is our interview:

AirlineReporter: Who stays at crashpads?
Shelby:Our Crashpad is not only shared by pilots from all airlines, flight attendants from all airlines, but also with air marshals,& maintenance folks that have been displaced by their airlines. Thank goodness we are NOT all here at the same time!

AR: How big is your crashpad?
S:My crashpad has 6 Bedrooms & four bathrooms for approximately 25 people.Â  I’m lucky, in the “Girls Room” (we call 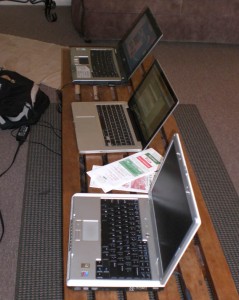 Picture of the laptops. "Seriously, we can't live without them"

it the “Presidential Suite”) there are only two of us & we have our own bathroom.Â  I share with a First Officer. She and I both work for the same airline, which is nice, we speak the same airline language. We areÂ  rarely here at the same time, which means 90% of the time, I have the place to myself.

AR: Do you have to pay to use them?
S:Oh yes, you have to pay, the “Owners” of the crashpads actually prefer it! I pay $250.00 for my crashpad and this is considered a high amount to most folks I speak to. For this price I get, my own bed, Wi-Fi, Cable, maid service, and use of all the common areas (living room, kitchen, deck, back yard & grill)

AR: Do you like your crashpad?
S:I like my CrashPad, I am within walking distance to LGA,;it takes approximately 11 minutes from my front door to my airline operations.Â Â  There are way better neighborhoods for crashpads here in New York, like Kew Gardens, which is pretty much like crew crashpad headquarters; it’s half way between LGA & JFK and a preferred area, however this means every time you fly in or out, it is a bus or taxi ride.

AR: For example, how much will you be at your crashpad this month?
S:This month I fly LGA to MIAÂ  for 3 days straight returning to the crashpad every night, so for August, I will stay in my crashpad 12 days.Â  It is nice to know, when I return I know that my bed will be waiting for me!

AR: Are there any short-term type crashpads?
S: Yes, they are called â€œhot bedsâ€, meaning, they are 1st come 1st serve. They can run anywhere from $20.00 per night to $175.00 per month!Â  When they arrive they have to find a bed, make up their bed, and crawl in, all the while trying not to wake up the others sleeping around them. This is one reason I pay more.Â  After a long day, I like knowing that I have my bed, with my sheets, in my room to crawl into. 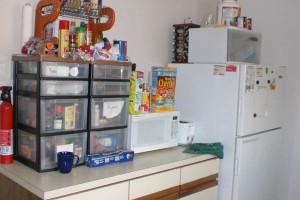 AR: Which was your favorite crashpad?
S: When I was based in Chicago, we stayed at the DoubleTree Suites. We had seven flight attendants that shared one suite! The hotel had a nice Gym, Pool, Happy Hour, Free Breakfast â€¦oh and the Double Tree COOKIES!!! (which is why we needed the gym).

AR:Â  Which was your least favorite?
S: Was when I was a new hire, all the classmates that I graduated with piled into a cheap nasty hotel… 10 of us 2 beds. â€œ Are you Serious??â€Â  I stayed 4 hours & left!

AR: With all those people sharing a shower, how do you work it out?
S:Since I’m lucky now & only share with one, it is not an issue.Â  Most crash pads have signup sheets for “Shower Time”, based on what time you fly the next day. Trust me, you know your fellow crashpad
buddies. You do a lot of things in the dark & a lot of tip-toeing is going on in the wee hours of the morning.

Some other questions that some fine followers of Shelby on Twitter asked:

Who does the dishes?
If you want to make your fellow crashpaders angry, don’t clean up after yourself. You will be asked to leave ASAP! You do your own dishes!!

Who washes your sheets?
Well, If you stay at a hotel crashpad, they are usually done for you.Â  If you live in a single family home, hopefully the owner of the crashpad has a washer & dryer and they let you use it.Â  We don’t have
one here at our crashpad. Thank goodness we have lots of Laundromats, in our neighborhood.

Who puts the CrashPads together?
My CrashPad is run by a New York Cop! A lot of pilots & flight attendants run their own crashpads, I believe, out of years of frustration! There is this one crashpad here in New York that is affectionately called the “Sticky-Note” crashpad, because the owner is constantly putting up Sticky Notes on what NOT to do, I mean they are everywhere!

Thank you Shelby for the interview and if any of you have any additional questions, let me know and I will ask her!