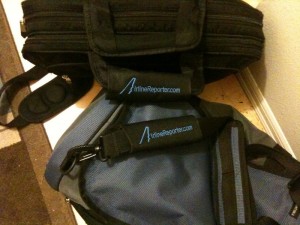 My custom luggage handles...yes I am a nerd.

I am sitting at Seattle-Tacoma International Airport once again (and enjoying their free wi-fi). I am off to Atlanta to do some cool things with AirTran for the next few days. Just in time, I have been getting that desire to get airborne again!

I am going to learn some aspects of being a Â a flight attendant at AirTran’s training facility, which will kick off a new series on my blog where I explore different airline related jobs. You can expect some blogs on my adventure in the near future and until then follow my Twitter.

Because of scheduling I am actually going to be flying a red-eye on US Airways to Charlotte, then down to Atlanta. It will be a long night, but who needs sleep?Â US Airways just announced they have started providing GoGo Inflight WiFi on a few of their Airbus A321’s. Just so happens I am flying a A321 to Charlotte. Part of me hopes it doesn’t have WiFi so I can get some sleep.

https://www.airlinereporter.com
Body Scanners Are a Joke and Do Not Keep Us Safe
In Flight Back to Seattle (Before stopping at Milwaukee)
3 Comments

thats really nice, the best part about it is that the go go wifi nevermind the sleep for as long you had fun while flying rather watching the onflgiht movie.

I can’t wait to see the story on your experience! When will you be travelling internationally?

Be “calm and assertive” in training.