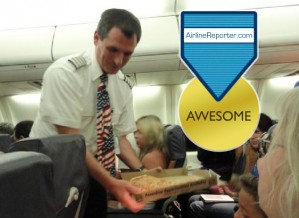 At a time where airline’s frequent flier programs are becoming less friendly with higher charges, more miles required to redeem free flights, and more restrictions, American Airlines has decided to try something new and make it easier for its fliers to redeem their miles.

American Airlines is now allowing passengers to easily redeem one-way tickets for half the miles a round-trip ticket takes. This will open up many more options for those that only need a one-way flight, but wasn’t able to easily or cheaply do it with their miles. This should also make it easier to find a free seat on an airline. For if a person was booking a round trip “miles flight” and one of the legs had no more free slots, the entire itinerary would be denied. Now, it allows more flexibility.

Airline analysts think American Airline’s move will help to booster their AAdvantage membership by millions and will cause a ripple effect to other airlines, forcing them to follow suit. This should bring up revenue for additional passengers who want to build up their miles and also via partnerships with hotels and rental car companies who purchase miles for airlines.

It took about a year for American Airlines to make the changes to their system to handle the one-way ticketing and they expect it to take another year before seeing other airlines providing direct competition.

Does Southwest Airlines giving out free drink coupons help them to acheive #1 status?

According to the Customer Service Satisfaction Index, airline passengers feel the airlines are doing a 3.2% better job in customer service compared to the year before.

Although fees are up, the numbers of passengers are down. This means less lines, fewer bumped people, and more room since you might have no one sitting in the center seat.

Southwest Airlines was #1 for customer satisfaction for the 16th year in a row with it’s highest rating ever. The biggest gainers were Delta Airlines, US Airways, and Continental who improved by margins of 6.7% to 9.7%. American Airlines saw the largest decrease (3.2%) and United Airlines ended with the lowest overall score for the year.

It will be interesting to see if the airlines can keep this positive trend going, since hopefully by next year we’ll have a strong economy and fuller planes (and lines).

At a time where airlines are cutting jobs, services, airplanes, while raising fees – it seems odd that American Airlines has decided to move forward with paying out $14million in bonuses — or does it?

There is no denying that moral at some airlines are reaching record low levels. About 72,000 American Airline employees might feel a little less down when they see their performance based bonuses (averaging $200).

According to American Airlines, the incentive program seems to be working – with customer service up 3% and on-time service up 23%.

I think it can be hard for airlines to realize what their greatest investment can be…not planes, new technologies, or routes, but investing into their employees. On a flight with all the “toys,” no fees, and on the newest plane can be great, but if the customer service received is horrid, it can leave a very lasting impression.