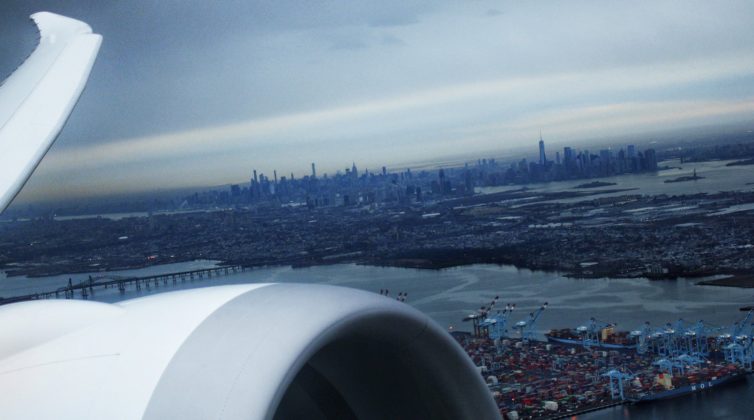 Disclaimer: as you’ll soon see, I’m a very amateur videographer. And I’m aware I need to diversify my background music library. So please appreciate these videos for the #AvGeek joys (which are great), and not for the production values (which are not great).

This was a pretty recent flight, and my first on the 737 MAX. That unmistakeable wing and winglet was a nice foreground for some beautiful waterfront views as we took off to the east over downtown/midtown and South Beach. Other highlights include a lightly-loaded 747 freighter gracefully lifting off beside us as we taxied to the active runway, a look at American Airlines’ massive Miami operation, and a fly-by of Fort Lauderdale airport.

The experience on American’s MAX was a little mixed — read the full story here — but I have zero complaints about the views.

Second Place – A Dreamliner Takeoff With a Rainbow Off the Wing

This video was from United’s inaugural flight of the 787-10 Dreamliner from San Francisco to Newark. It was pouring when I got to the airport, but right before we pushed back the blue sky opened up and a beautiful rainbow burst onto the scene. It was right off the right wingtip as we took off. That graceful 787-10 wing pointing out over the bay towards the rainbow felt like one of those once-in-a-lifetime #AvGeek moments. After I posted this video I learned (thanks to our viewers) that it’s an AvGeek faux pas to play video during the takeoff itself.

The video below is set to start with the takeoff roll, but scroll earlier to get a look into the United Polaris cabin and the pre-flight festivities.

The climbout around downtown San Francisco was also straight-up gorgeous. You can read about the full flight here — the United team had a LOT of fun with the inaugural being on Valentine’s Day, and it was a treat to fly Polaris on a domestic route.

So what could beat that? Well how about…

First Place – All Hail the Queen

Apart from tail cams, how do you get a forward-facing view from a jetliner? Option #1: invest years in becoming an airline pilot. Or option #2: fly one of the very front seats on a Boeing 747. Back in 2017, I used miles to snag an around-the-world itinerary that ended with a United 747-400 flight from London to San Francisco. And I got to book seat 1A. It doesn’t get any better than that. That far forward the fuselage wall has already started curving towards the nose, so instead of pointing to the side like most plane windows, your view is partially forward facing. It was one of my first times trying video on a flight, so it’s a bit shaky during the takeoff roll. But if you watch it you’ll see why it’s my favorite.

I hope you enjoy these videos and the others we occasionally post on YouTube. If you do, subscribe to our channel and let us know in the comments section below, and we’ll keep the content coming. Happy watching and happy flying!

https://www.airlinereporter.com
Finnair adds Seattle to North America destinations; 8th new international at SEA since 2020
JFK is Breaking Ground on a New Terminal One