From a design perspective, both liveries are incremental adjustments over the existing “Sunburst Tail” livery. After a quick polling period, the airline quietly announced that the new livery will be comprised of the forward leaning sun-stripes, represented by concept “A” above.

BONUS: PHOTOS OF THE FIRST AIRBUS A319 IN ALLEGIANT AIR’S LIVERY

The choice will likely come as a relief to enthusiasts (this writer included) who have a general distaste for the growing proliferation of “Eurowhite” liveries which have slowly crept into the North American skies. However, more non-white paint and increased complexity typically equates to higher costs, and longer paint shop time, something Allegiant and their industry peers have become experts at avoiding. 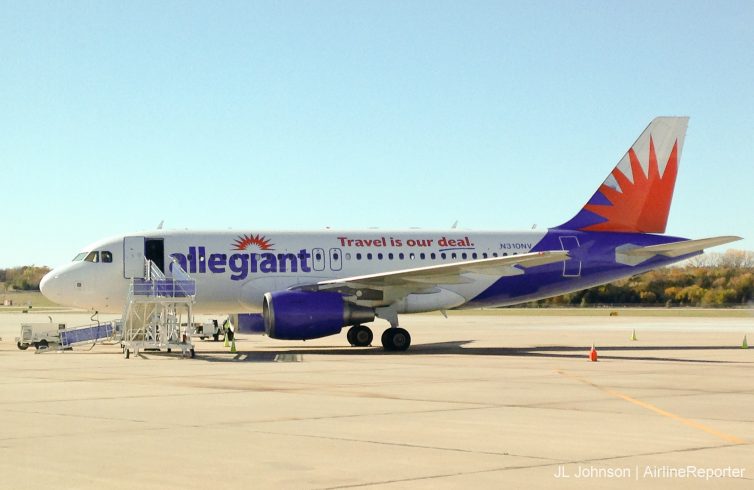 Allegiant has in the past struggled with updated liveries, such as the “Travel is our deal” iteration. The photo above, taken in November 2013 shows a (then) newly acquired, and partially painted A319 used to inaugurate service from the small Kansas town of Manhattan to Phoenix, Arizona. N310NV continued to fly with partial paint for nearly a year before finding the time to visit the shop for completion.

Upon contacting the airline for comment on the updated livery and roll-out plans, Brandon Myers, Public Relations Specialist confirmed the newest iteration of the livery will be used as the go-forward standard for future deliveries, including the 12 new A320 CEOs. While a timeline for receiving these new planes is not yet available, the company has shared their aggressive plans to transition to an Airbus-only airline by 2019 on at least a few occasions.

BONUS: FLYING ON AN ALLEGIANT MD-83 TO ST PETERSBURG & BACK

In any case, there is no better time to get out and enjoy the excitement of flying on a classic “mad dog.” Do it while you still can; the MD-80’s days are limited.

Great post. I like the new look myself, but I think I would have chosen the back leaning sun stripes (B). I don’t know why, but that one seems to make the plane look longer. Is that just me, or does anyone else see that too?

You’re not the only one. It’s a known visual illusion and it works 🙂

I completely understand where you are coming from. While I think I like the one they picked the better option, there’s something about the livery being “backwards” that I just can’t shake. This change makes it worse.

I agree with you Andrew… mainly for the same reason. It’s already a short, stubby looking plane, so any livery to stretch the look is better. But either way, the new livery is way better than the past.

I sincerely wish Allegiant all the luck in the world with their Airbus purchase. But I for one will pay more to fly other airlines. My experience with Allegiant was far from stellar last February (2016) when I experienced horrible delays and an emergency landing into Birmingham due to aircraft malfunctions. All this in the same week on the Omaha to St. Pete/Clearwater route and back.

Second-hand A319/A320s were attractive back in 2012 when oil was >$120 a barrel and U/LCCs couldn’t get rid of the older thirstier revisions fast enough. Now with oil barely half that buying ceos brand-new is almost a might-as-well proposition with other U/LCCs holding onto their older aircraft and keeping them in service.

As much as I’ll miss the MD-83 and -88s (I flew one of Allegiant’s a few years ago) the A319 and A320s, whether bought brand-new or second-hand, will improve Allegiant’s dispatch reliability.

The 737-700 and -800 are smaller aircraft with lower payloads and MTOW than the A320 and A321, respectively, so it’s not an oranges-to-oranges comparison. Only thing I’ve heard is that the 737-800 fully loaded is just so slightly cheaper to operate per seat-mile than the A320 only due to the few extra warm bodies that can be shoehorned aboard the Boeing.

One would have to take a poll to find out for sure 🙂 Yes I know there is the saying “If it ain’t Boeing I ain’t going” but I suspect most pilots simply certify for and fly whatever is in their employer airlines’ fleet.

The Boeing vs. Airbus discussion is one that will likely never die. I won’t pick a side BUT Airbus has really upped their game over the past few decades. Boeing has a reputation for arrogance, and I think that has hurt them. They were the clear leader not long ago, and now Airbus has caught up and in many cases has more compelling offerings. One thing I really like about the Airbus product is a slightly larger fuselage means more room for slightly wider seats, and better aisle room.

Thanks for reading, Henri.

Had a great flight to Orlando/Sanford from Bentonville,AR in April and May 2016. —Just make sure you get all you need when booking or it will cost you more!!

I’ve flown Allegiant many times and was blessed with no equipment problems and on time arrivals out of airport code PIE. After reading about all the mishaps they have its led me to believe that Allegiant issues are not really fleet equipment related, it’s manpower, training and compliance related. Bringing in the airbuses will be nice from a passenger comfort aspect, but if everything else stays the same, it will be same results.

Great article, JL. I agree with you on the livery point – the more colourful the better. I’m genuinely curious as to why it is called “Eurowhite” though? Found a couple of articles on the evolution of aircraft livery and the odd commentary here and there about it stemming from Air France and Lufthansa designs in the 1960’s and 1970’s, but no definitive answer.

Seems like it popularized from a) quick logo switchovers on subleased aircraft and b) energy and cost savings from fuselages not heating up as quickly under the sun and white paint taking longer to fade. So economical reasons more than aesthetic.

I tried to get to the bottom of it a few years ago and came up with nothing of real substance. I have to assume it’s one of those things that is just known, likely stemming from planespotting forums. Many of the earliest samples of the portmanteau I found were on Airliners.net. Whether or not the Europeans were the catalyst, they are stuck with the blame, it seems. Thanks for reading.

I thought the current livery looked a bit familiar –

Jet2 are a British low cost carrier and this livery is used on some of their aircraft to advertise their package holiday operation.

Jet2 did in fact “steal” that livery from Alegiant, after they leased a couple of 757’s off them, and decided they actually rather liked the colours!

Been flying with Allegiant when they used Fokker frequently. Always smooth flights even in bad weather. Concerned about the airbus’s as their ride quality stinks even in good weather. Not sure if it is the automation causing it but also heard they have struggled to keep up with Boeing on wing design. Now back to Allegiant. Very smooth trips in air recently on the MD 80s but on the ground another story just awful horrible service. Long waits everywhere always late taking off and landing extremely late and they are coming into underserved airports. Talking 30-90 minutes last 6 flights with them sitting on tarmac both on takeoff and waiting for jetport. Getting on and off planes has been slow too with excessive turnaround when on the returning flight.