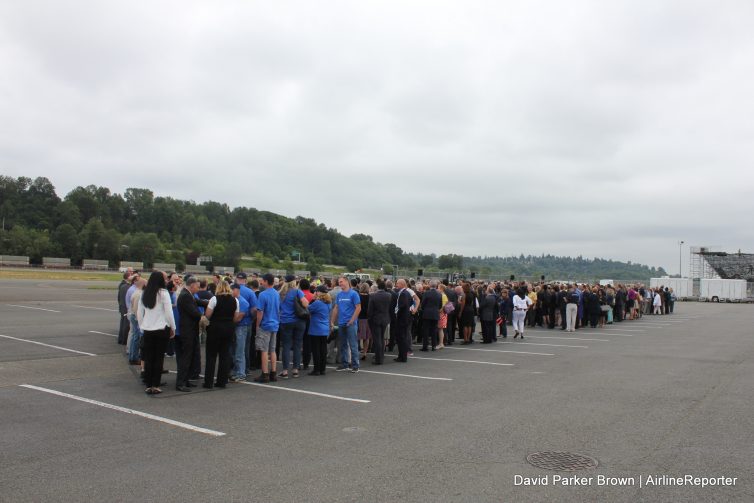 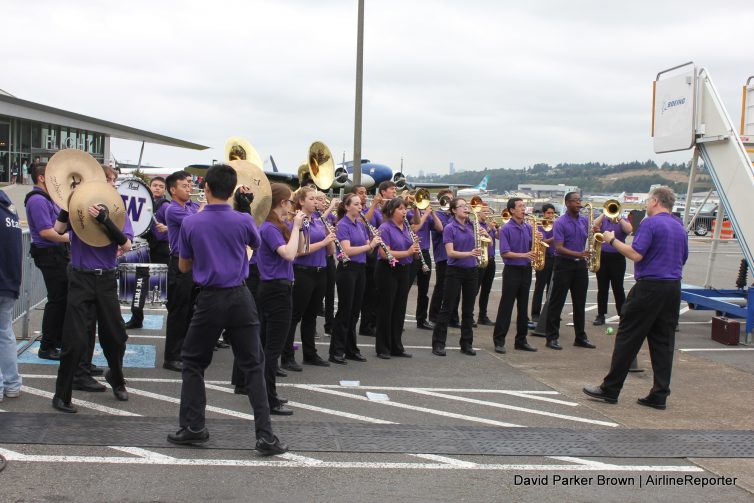 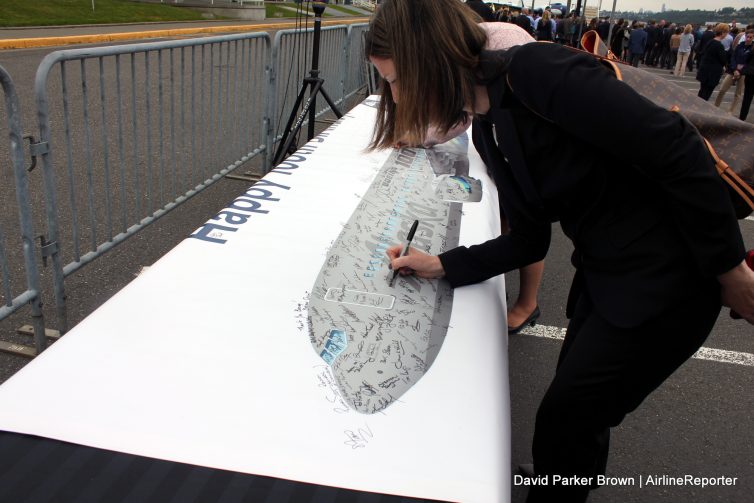 The plan was to have guests arrive at the Museum of Flight and then wait for the 737 to land with some special passengersÂ on board. The plane was brand new – Alaska just took delivery from Renton, and then it was briefly parked at Seattle Tacoma International Airport, where the passengers boarded. The flight took aÂ quick tour of the area (aka flying by Mount Rainier) beforeÂ landingÂ at Boeing Field. After the event, the plane was flown up to Paine Field to have the Scimitar winglets and WiFi installed. Even in its short time with the airline, the aircraftÂ has done a tour of all the major local airports (RNT-SEA-BFI-PAE). 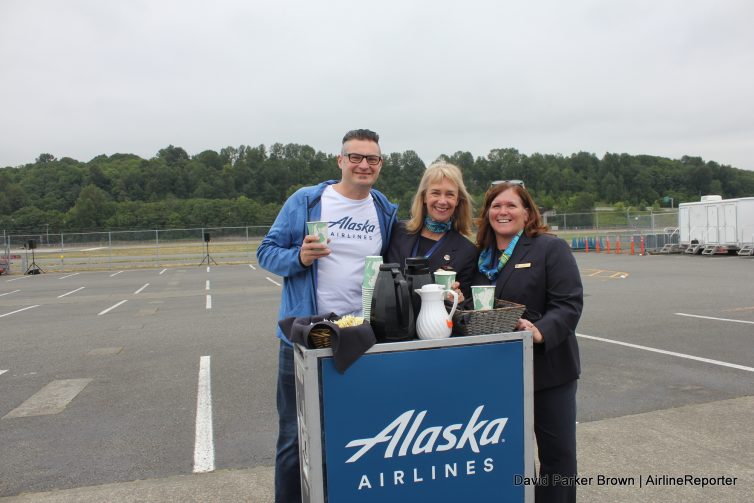 I arrived at the Museum of Flight with plenty of time to spare. I was hoping that they might have coffee to wake up a bit and Alaska did not disappoint. I saw a table with a bunch of coffee and I started heading over, until I noticed that there were service carts, with flight attendants in the middle of the parking lot. Um… that is freak’n awesome. I moseyed on over and sure enough, they were serving coffee. I have to say that coffee served from a cart by smiling Alaska flight attendants, just tastes better than served off a table. 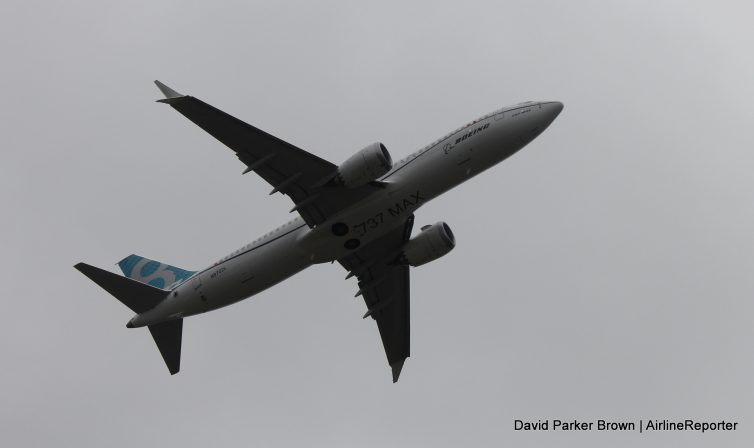 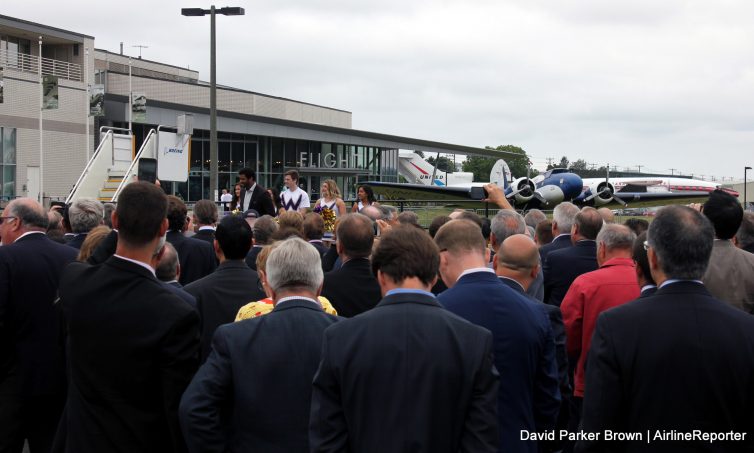 Then the party got started. With an introduction from the University of Washington Husky Marching Band and cheer squad, Seattle Seahawks quarterback Russell Wilson came out to address the crowd. I have to be honest… I am not much of a “sportz nut,” and I was more excited about him being Alaska’s Chief Football Officer. No offense to Mr. Wilson, but when he came out, there was also a 737 MAX taking off and I might have spent more time taking photos of the plane than him. 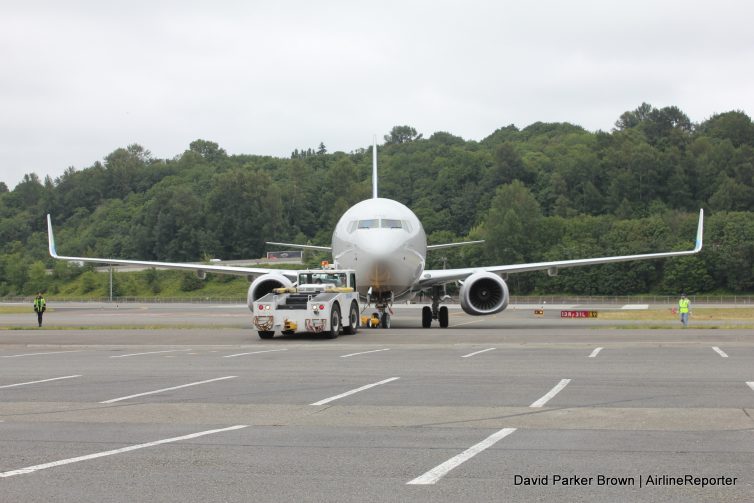 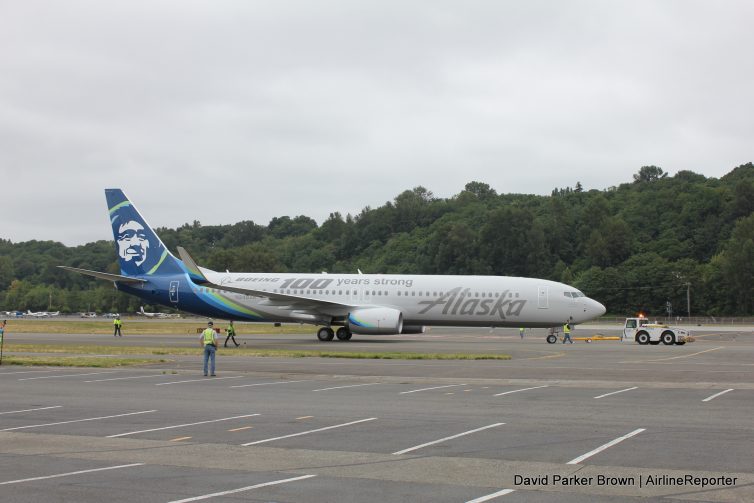 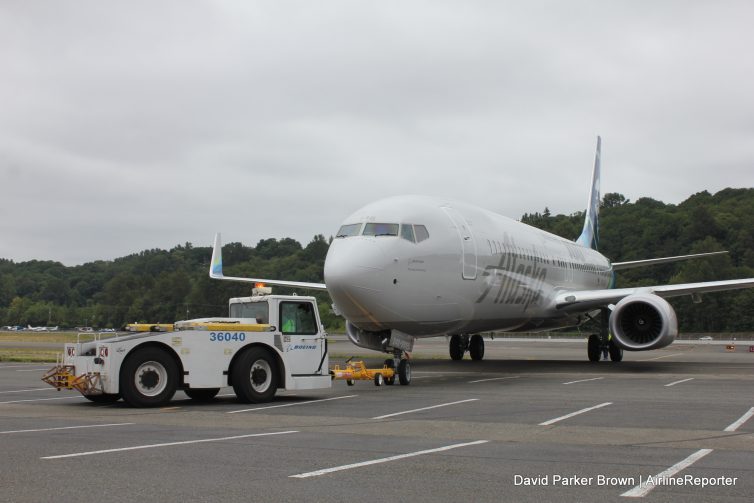 Then it was time for the 737 to land and show off it’s special livery. I have to say that I really liked it!

It was not that long ago that Alaska showed off its new branding and the look has quickly been updated throughout the company (heck, even the media check-in sign had the new branding). I think this special livery works well, since most of it is the same. The major differences areÂ that the fuselage is a shade of grey (vs white), the titles are grey (vs blue), and of course the “100 years strong.” I really think it is classy and does the job. 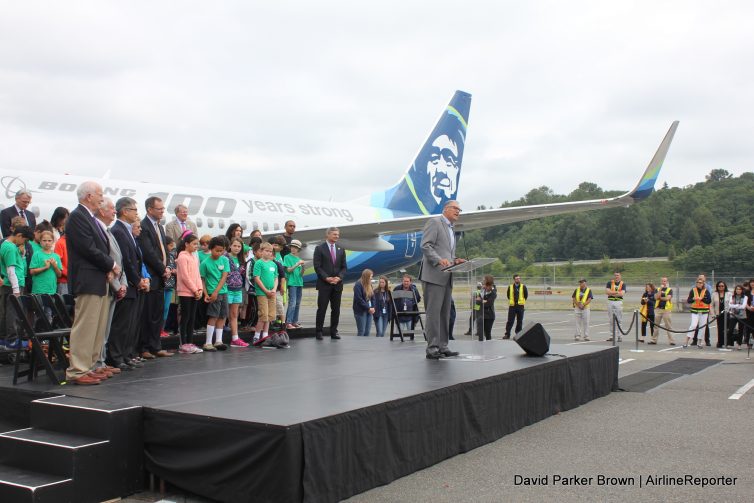 VIPs on the plane. Washington State Governor Jay Inslee speaks to the crowd.

Once the plane parked, those on board de-planed. Some of the passengers included Washington State Governor Jay Inslee, four past governors of Washington State (Christine Gregoire, Gary Locke, Mike Lowry, and Dan Evans), Alaska Airlines CEO Brad Tilden, president and CEO of Boeing Commercial Airplanes Ray Connor, and campers from the Museum of Flightâ€™s Aerospace Camp Experience — what a treat for them! Then it was time for some of the leaders to say a few words about Boeing’s 100th birthday and their close relationship with Alaska Airlines.

â€œBoeing is a global aerospace leader and our countryâ€™s leading exporter, and people throughout the Northwest should be very proud of them,â€ said Tilden. â€œThey design and build amazing jets like the 737, and the more than 77,000 local employees of Boeing strengthen the economic and social fabric of our region. All of us at Alaska want to congratulate them on their 100th anniversary. We are truly honored to be Boeingâ€™s hometown partner, today, and into Boeingâ€™s next century.â€

Attendees and the business community also surprised Boeing with a $100,000 donation to the Washington State Opportunity Scholarship. This money will help low and middle income Washington residents earn degrees in science, technology, engineering and mathematics (STEM) fields. Boeing, in turn, matched the donation with a $100,000 gift of its own. Birthday surprises for everyone! 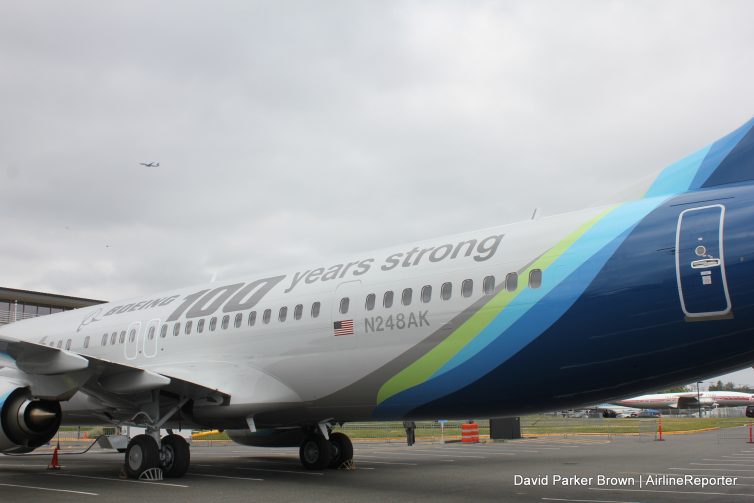 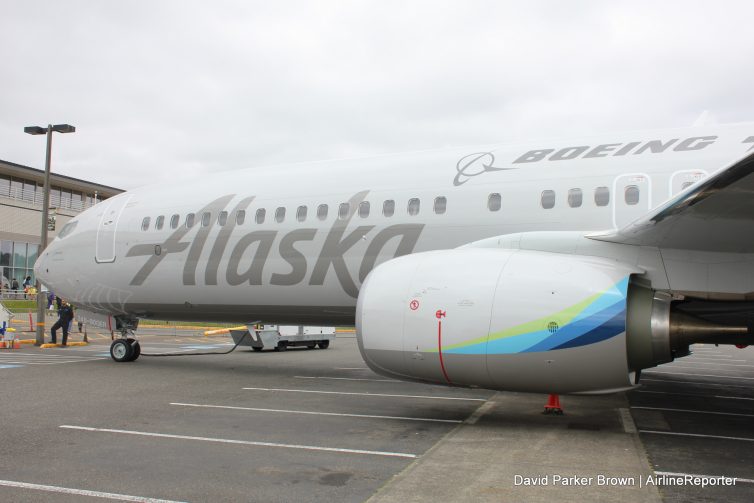 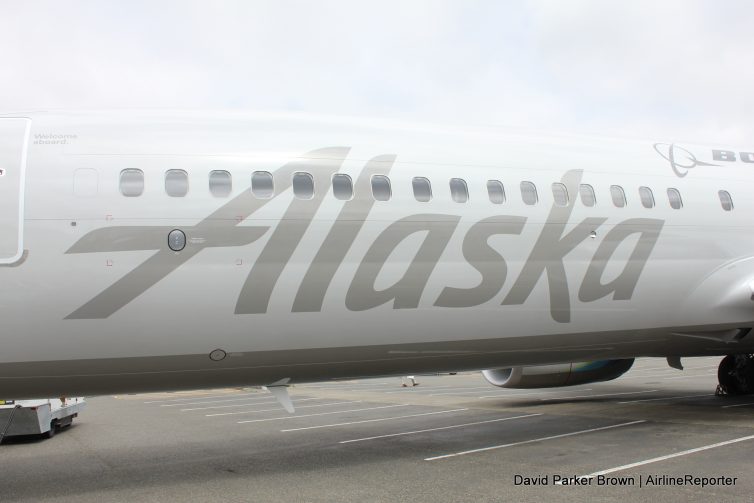 This particular 737-900ER (registration: N248AK) is the 153rd 737 for Alaska Airlines. It is scheduled to start service on July 11th and, other than the special livery, there will be a special commemorative plaque that will be installed in the interior. Luckily, for almost everyone reading this story, you will surely notice the special livery on the outside long before entering the aircraft. 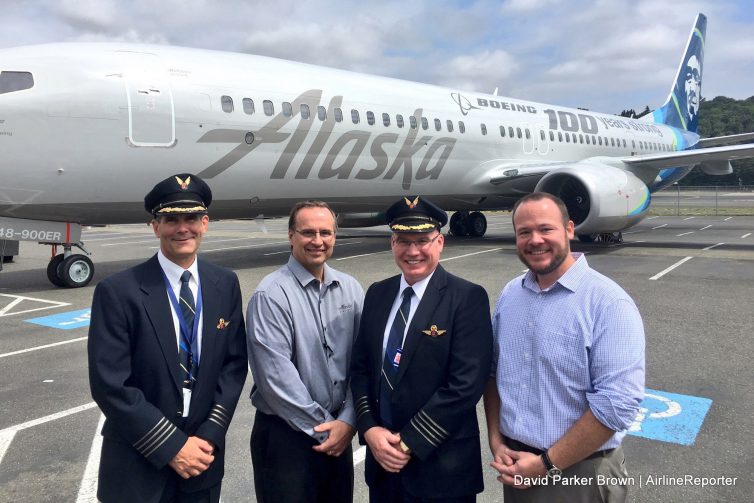 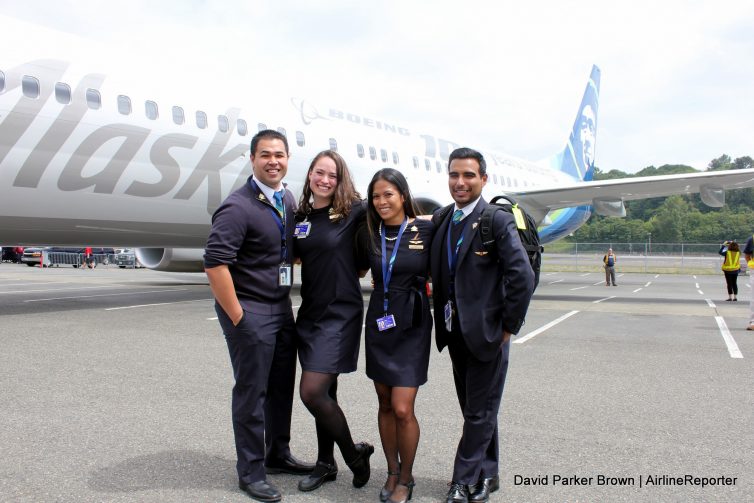 The flight attendants who worked the VIP flight.

Not to be outdone byÂ a single 737, Boeing will be celebratingÂ their own birthday on July 15thÂ with a historical display ofÂ jets from theÂ 707 to the 787. I know it might be frowned upon to throw you own birthday bash, but at least Alaska got the party started in an awesome way!

So PNW it hurts. (Not in a negative way of course, I live in the “PNW” of sorts and love it up here).

As for the Boeing historical display, I can’t wait. Nicely done as always David!

(OT: did anyone catch the first commercial flight of the Comac ARJ21?)