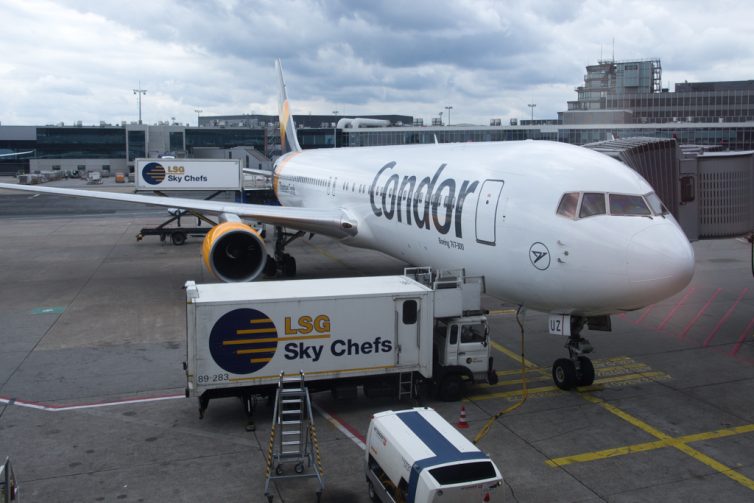 The day started off at the check-in counter in Frankfurt. Condor paid for the tickets, and was nice enough to put me up in their business cabinâ€”previously dubbed Comfort Classâ€”aboard the Boeing 767-300. Tickets were quickly in hand and it was off to gate C4 to catch the flight.

Like many inaugural flights, the airline and airport put together a nice event at the gate for the passengers. A table full of free (non-alcoholic) drinks, a giant cake in the shape of Texas, little American flags draped across the ceiling, and an Austin-based country musician playing live music were all on hand. 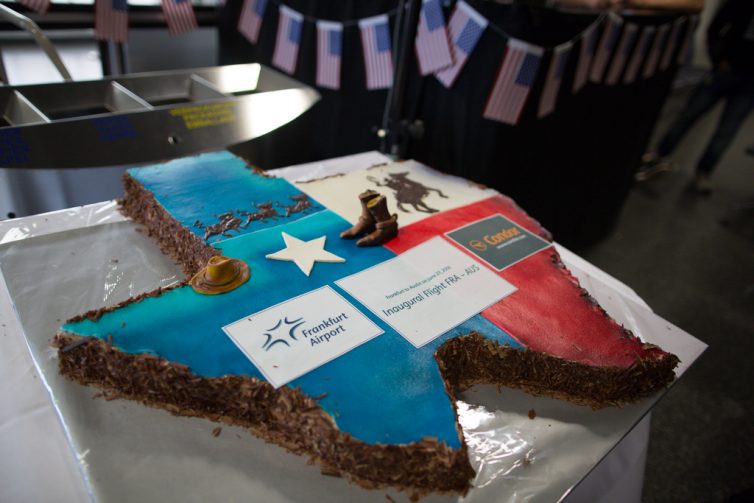 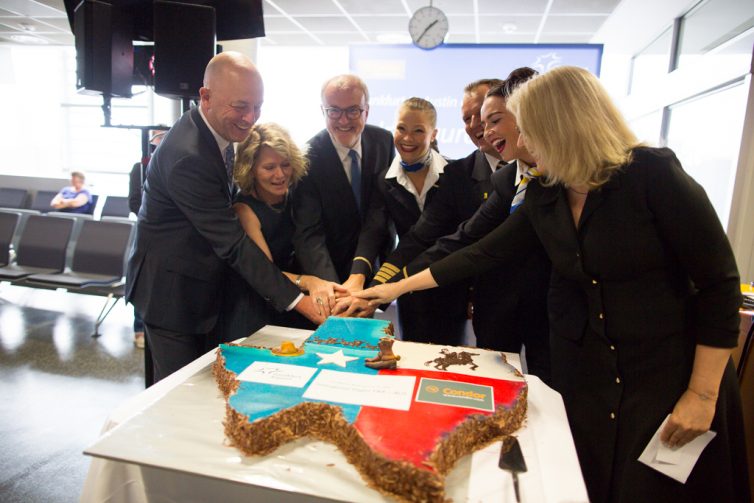 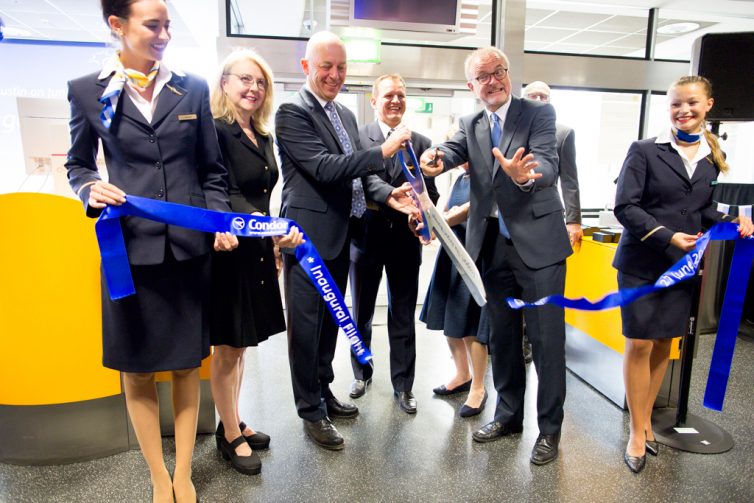 VIPs from the airport and airline made a handful of speeches, and boarding began for the 11-hour flight. Flight attendants handed out Ritter Sport chocolates encased in a special box celebrating the first flight, along with a commemorative postcard for Condor’s 60th birthday year (the card featured an older photo showing off the airline’s bare metal DC-10, a plane and scheme I always wished I could’ve seen).

Once airborne the flight was more or less normal, aside from a handful of announcements. I settled into seat 2A and, feeling terrible from having developed a bad cold the day before, chugged the bottle of water waiting at my seat then fell asleep for six hours in the angled-lie-flat seat. 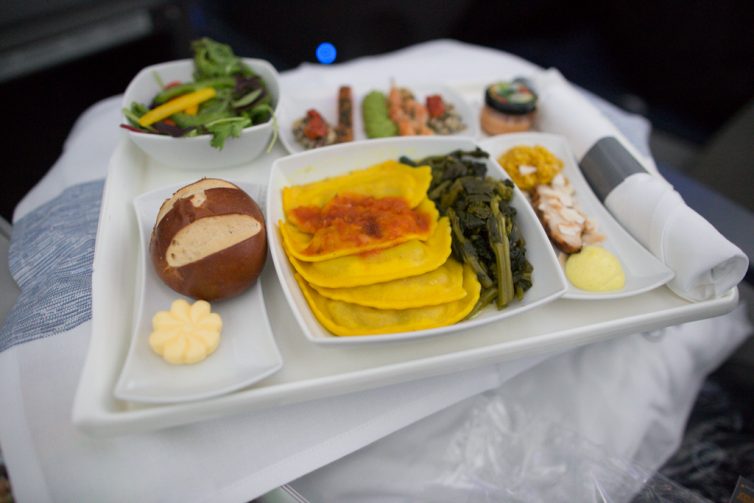 My meal for the flight – Photo: Jeremy Dwyer-Lindgren

Luckily when I awoke dinner was still available, though the full service was long over. A flight attendant was nice enough to put together an all-in-one plate with appetizers of chicken breast with mango salad, quinoa salad with scampi skewer and smoked salmon, and the main dish of German raviolis. A follow-up plate of desert and several cups of warm fennel tea capped off the meal.

I enjoyed the rest of the flight by vegging out and trying not to sneeze too much (who wants to be that guy?) while watching several movies on the 15â€ monitor. The stock of movies, as I recalled from a previous Condor business class experience, were very solid but also somewhat limited. 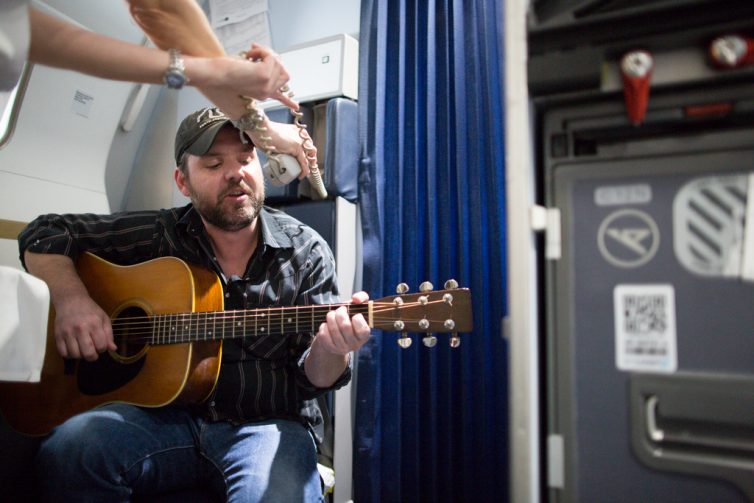 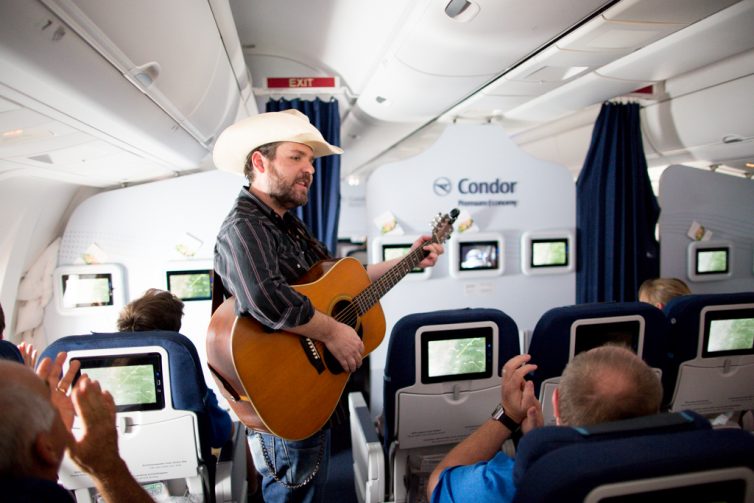 Oh, and remember that country singer? He performed a few live songs in the cabin just before landing (his name is Lucas Hudgins, and he’s pretty good!), delighting passengers who pulled out cell phones and tapped their feet to the beat as the trip concluded.Â Upon landing the Austin-Bergstrom airport fire department welcomed us with a water cannon salute.

Condor will continue visiting the city twice weekly (Mon, Thurs) through September 1st, when the service ends for the season.

Itâ€™s also the latest international route for Austin-Bergstrom, which has added service to London and a handful of Mexican destinations in recent years. The airport also underwent a significant revamp to its customs and immigration facilities (which look pretty darn nice), and a new TSA checkpoint (closed during my visit, though looked big and airy). 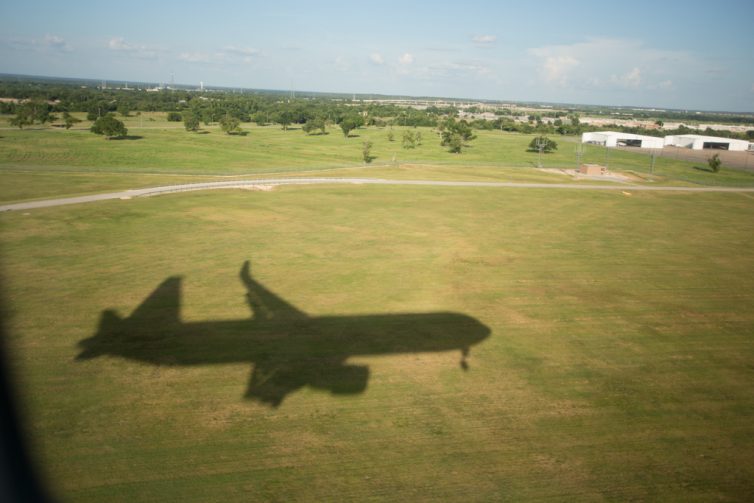 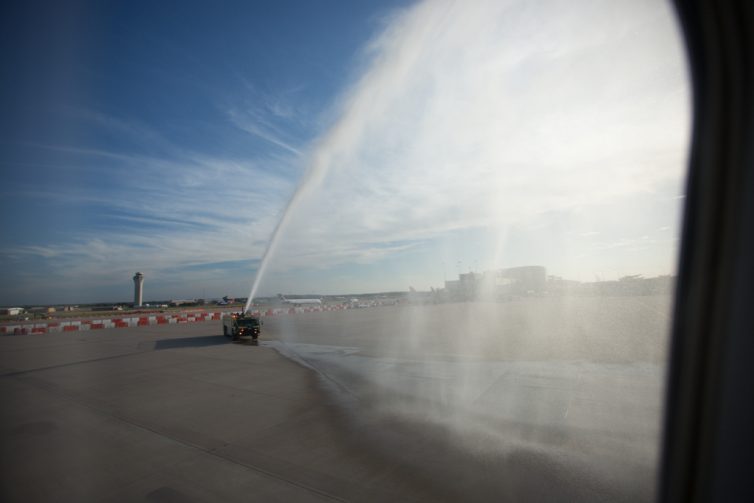 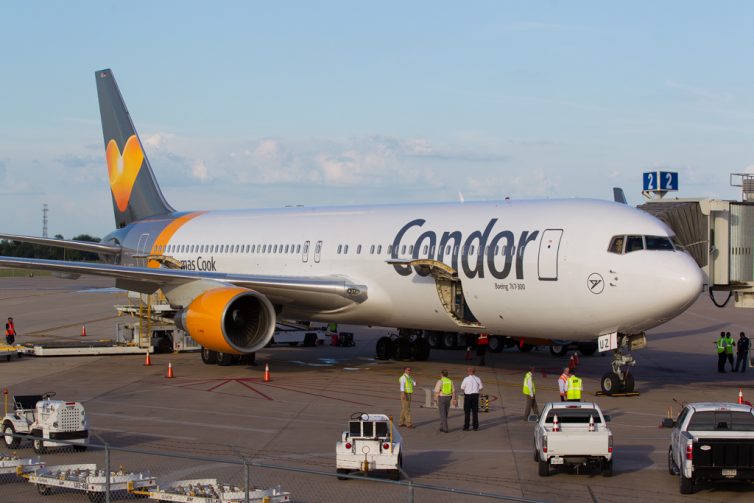 Though Texas might be a new addition for Condor, it has hardly been a stranger to the US. The airline has been steadily building up its presence over the past several years, and with Austin marks its fourteenth destination in the States, though most are only seasonal.

Next year, 2017, will see New Orleans and San Diego to Frankfurt added to the map. Service to Condor’s secondary hub in Munich will expand as well, with service being added via Las Vegas and Seattle.

http://www.jdlmultimedia.com
Exclusive: Inaugural Route for American’s 787-9, Plus Other Routes & Cabin Details
Singapore Airlines Economy Class: Do They Still “Got It?”
7 Comments

I can’t imagine an 11 hour flight at the back of the plane. Condor’s 767s have 30″ seat pitch. That sounds like a recipe for extreme discomfort. I ruled out Condor for my upcoming TATL for this reason. And my TATL’s are only 6-7 hours.

Good point. I hadn’t thoghut about it quite that way. 🙂

I was stationed at Bergstrom in 1966.

Once again, Austin comes through with an international route while San Antonio continues to beg Southwest for nonstops to Lubbock and Harlingen.

I was on time to the party, a little late to the story

Your post is great and engaging, the content is very practical, and gets people’s attention. Thank you for sharing.