The rain partly cleared as I arrived and the first obvious difference between Honeywell’s 757 and the run-of-the-mill 757 is the third engine on the side of the fuselage. The engine mount is used to test different Honeywell engines in the “real world.” During my tour, the Honeywell TFE731 engine was hooked up and it was being tested for vibration issues. 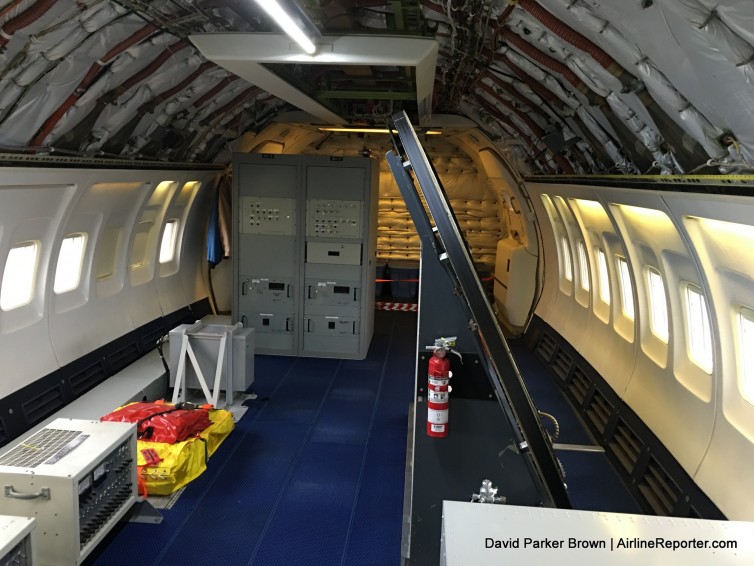 Looking towards the rear of the plane

BONUS: Flying with Honeywell’s Crash Test Dummies — On Their Convair

Although some of the original passenger interior can be seen (the side walls in the back), most of it was stripped and the plane was configured to be a test bed. 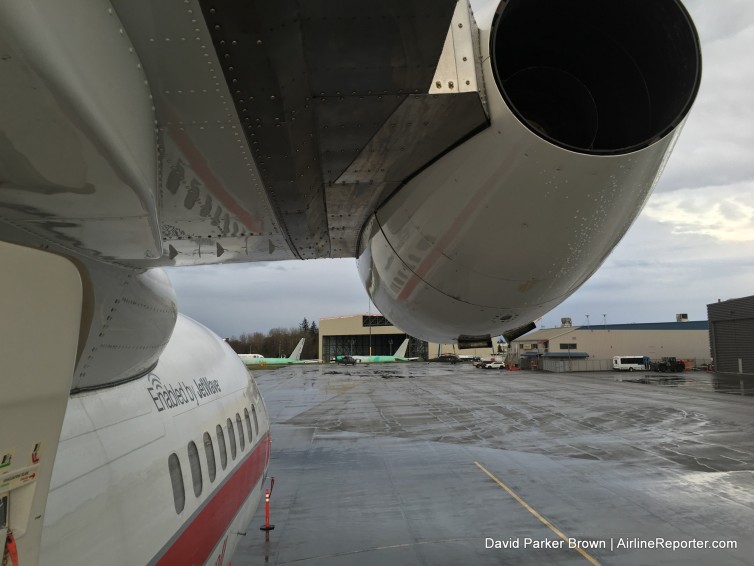 New Boeing aircraft are in the distance at Paine Field

The pylon for the third engine was designed in a way that does not affect much of the overall handling characteristics of the 757. According to the pilots, the only time where there is a noticeable difference is during faster-than-normal flight during testing. Even then, it can be easily offset. 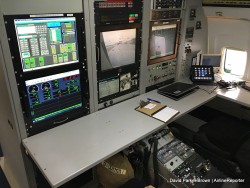 Some of the Honeywell work stations 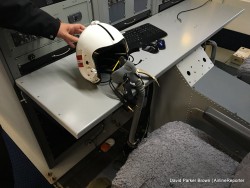 Full-on oxygen mask and helmet in care of an emergency 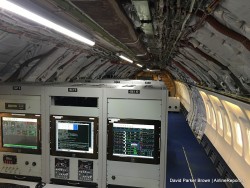 Looking towards the back of the plane

Walking inside the 757, we first headed toward the back of the plane, which had a number of different computer stations. The stations use different software to test not only aspects of the engine attached to the side, but also other possible equipment being tested on board. In this case, they were testing things other than the third engine, including the Inmarsat Global Xpress broadband internet.

BONUS: Behind the Scenes – How Honeywell is Changing the Flight Deck 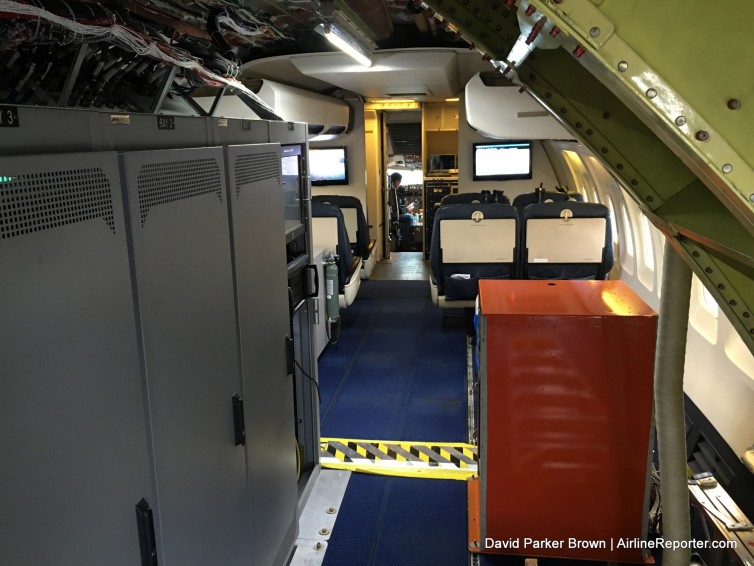 The inside of the Honeywell 757

Before each flight, the aircrew creates a flight profile to figure out the altitudes, type of weather, and length that will be needed for each test flight.

The equipment allows them to get results in real-time. Instead of just collecting data to be analyzed on the ground later, they are able to come to conclusions in the air, before landing. What the program is really doing is producing accurate data. 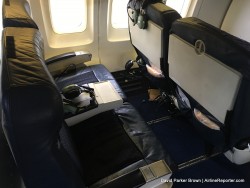 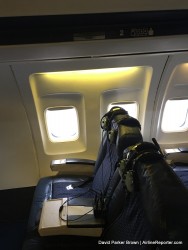 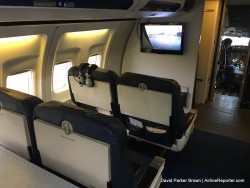 For the most part, the aircraft is self-sustaining. They even carry spare parts in the cargo haul and have two mechanics on board during operations. And for guests on the flight, there are two rows of old-school first class seats up front. When are first class seats the worst seats in a plane? When they are on this Honeywell 757 with so many better seats — including those in the very front. 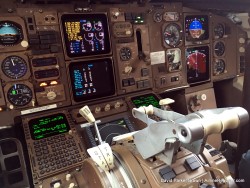 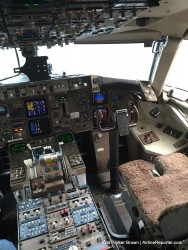 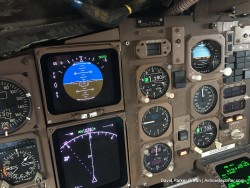 Close-up of some of the gauges

Sitting down in the cockpit, I was able to speak to Chief Test Pilot Joe Duvall. He has flown a number of different aircraft types during his career and still actively flies both Honeywell’s Boeing 757 and classic Convair. When I asked which was his favorite to fly, he explained that he loved them both for different reasons. A mostly empty Boeing 757 is like a sports car, but the Convair is like how flying used to be — much more hands-on and attached to the experience. I would say he has a pretty cool job!

BONUS: Checking In with Honeywell at their HQ in Phoenix 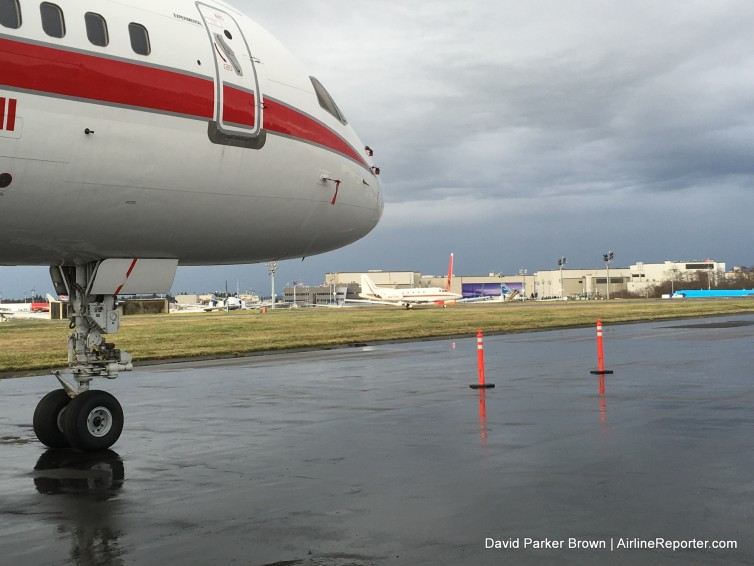 Almost like it was perfect timing, as I departed the 757, another Honeywell jet landed – their Sabreliner. Captain Duvall explained this was a special experience. Due to the testing locations and schedules it is rare for the two birds to be together. Only if the Convair was there too, but not on this day. 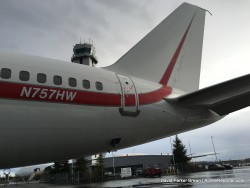 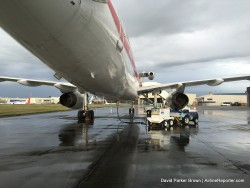 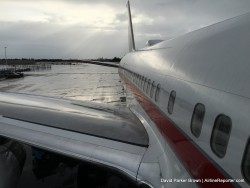 See more of our Honeywell Boeing 757 test bed photos on our Flickr page.

https://www.airlinereporter.com
REMINDER: Aviation Geek Fest Tickets Go on Sale Today!
How My Diabetes Got Me Hooked on Aviation
9 Comments

Nice article & photos, you should add a like button to your articles if possible.
If only the 787 had that tall noise gear stance the 757 has it would look even better.
I always felt the 787 looks so low to the ground. Keep up the great work.

I have heard two stories about the tall landing gear on the 757. One story is that the 757 and 767 were designed with similar flight decks to make it easy to transition back-and-forth between the two airplanes, and the decision was made to also place the 757’s flight deck the same distance above the ground as that on the 767. The 757’s final design was completed after the 767’s and this seems plausible. It does look like this when you look at the two planes side-by-side. It seems a little strange that someone would let this consideration drive the design. I have also been told that the gear needed to be taller to keep the tail from striking the runway in anticipation of the creation of the very long -300 version of the 757. This really seems to be the better of the two reasons, and maybe having the same flight deck heights is a bonus. I wonder if either of these is the real reason.

Thank You Joe for the inside information. It does make sense. I have talked to pilots of both, they did say the airlines requested cockpits where pilots could be trained on one & certified on both. To me the 757 is still the sexist airliner on the ground & in the sky. Without getting political there is a very interesting YouTube video on Trumps 757 AKA T- BIRD. Search “great planes, Trump. His Captain does so much work even unrelated to flying .

They really are very pretty, and easy to identify. We see them a lot at Eagle County Airport (near Vail, Colorado, and way up high in the Rockies) during the ski season. Those long sexy legs sure are attractive! A very long time ago I was an aeronautical engineer at Boeing working on the advanced version of the 727 some of the guys in the group were laying out the first version of the 7N7 (a potential narrow body replacement for the 727). That version looked a little bit like a 727, but it had just two wing-mounted engines. It did have a T-tail to stir up some brand loyalty to the 727. Somewhere I have an old photo of a model of that early 7N7. The 7N7 evolved into the 757, and the 757 is a lot better looking that that early version of the 7N7.

Does anybody know more about the history of N757HW? Boeing is reported to have used the first five 757’s for the testing program; but I have a production list that indicates N757HW was the fifth produced, that it first flew 0n 2/4/83, and that it was delivered to Eastern on 2/28/83. It doesn’t seem that it would have participated in the flight test program. However, the sixth 757 on the production list first flew on 7/2/82 and was delivered to Eastern on 5/20/83. It sounds like the sixth may have been the one that was in the flight test program. Is any of this correct?

Joe, what’s the title of the production list you used? If it’s NOT one published by TAHS ( and the subsequent off-shoot ) I’ll check mine for you. Let me know. I may have other 757 history publications, as well, that I can refer to.

Cool online name, by the way. I am actually a big 727 fan, but I got curious about the fate of the early 757’s when I read this article. I hope someone is planning to rescue the 757 prototype, or maybe the first one delivered to either British Airways or Eastern Airlines, when retirement comes. I have books with production lists for the 727 and was using an online resource for the 757:

The information on this site agrees with published lists I have for he 727 and am hoping it is an accurate source of information about the 757.

Good grief…excuse the spelling errors. I am having trouble with some of the letters on my keyboard.