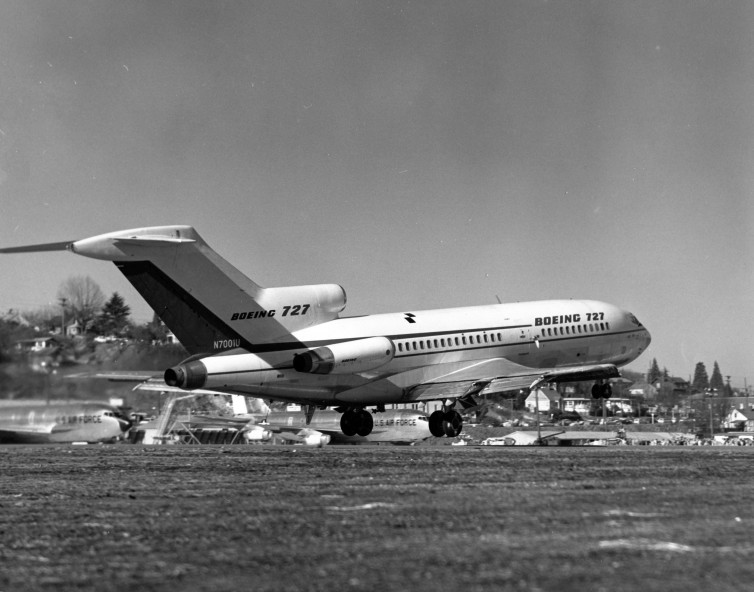 How to be a part of the historic final flight

Obviously the best way to experience this event is in person, but that won’t be a possibility for many of you. If you are going to be in the Seattle area, you have a few options. Unfortunately, you will not have time to watch the take off and then make it south to see the landing — so you have to choose.

Both the Museum of Flight and the Institute of Flight (formerly Future of Flight Foundation) are offering VIP viewing access. You can register for the take off here or head on over to the Museum of Flight to watch the landing. If you want to do it on your own, we offer our Paine Field and Boeing Field spotting guides to help you find a cool location.

If you know of more viewing options, please leave them in the comments below. 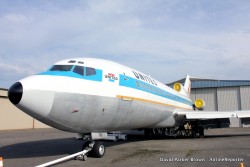 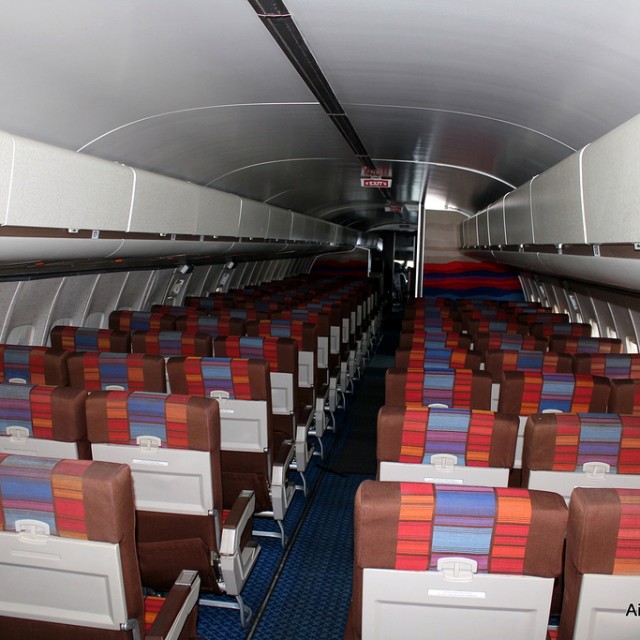 The interior of the 727 looks almost like it did when it was delivered. 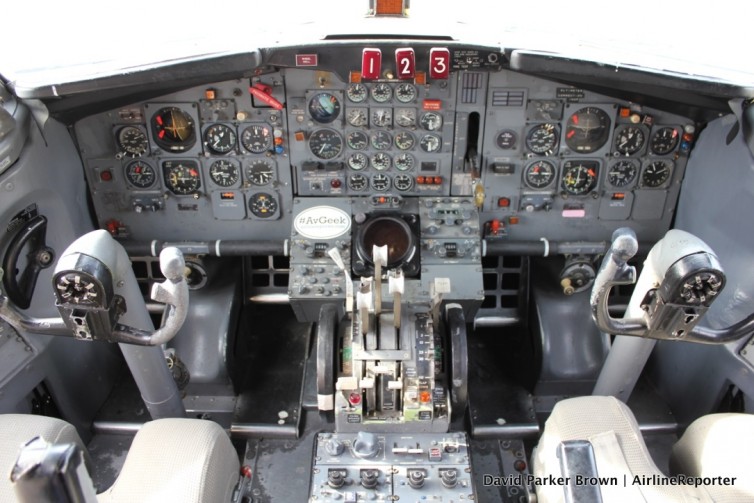 Close up of the first Boeing 727 cockpit

Background on the 727’s final flight

Here is our coverage of the 1st Boeing 727’s last flight:

Epic is an understatement! What Bob Bogash and his crew of volunteers have done is a miracle. N7001U gets to fly to Boeing Field in her original delivery colors. She spent her entire airline career working for United Airlines. At the museum she will join Bob’s own little cutie: the first 737, which spent most of her professional career in NASA livery. Chicago’s Museum of Science and Technology and the Air & Space Museum also have 727’s that worked their entire lives for United, and they are also displayed in handsome UAL cheatline colors.

Just a correction for anybody reading any of this. Chicago’s Museum of Science and Industry has former United Airlines 727 N7017U that is hanging indoors and you can walk through it. It has been rigged so that you can see the gear operate and explore some of the rest of the airplane. I think the first 727 actually delivered to an airline, N7004U, is owned by the NASM but is sitting in the Arizona desert without her engines. I don’t think the NASM has a 727 on display.

Maybe I should skip school to see it. 🙂 I live about an hour away from Paine Field.

If I were in the Seattle area I’d be at Paine Field or Boeing Field to watch this event. I teach at a university and would cancel my classes for the day!

The word “EPIC” is getting way overused and I’m Surprised you did. The term is diluted now. Such is the kid-speak these days.

This is a great bird getting the royal treatment it deserves.

It might be overused, but I feel very called for in this situation.

I have been doing this for over 50 years …. and believe me THIS was EPIC

Is the comment about “epic” aimed at David? I thought his “freak’n epic” comment expressing his excitement about the upcoming flight was way cool. Oops…sorry…I suppose that is a tired, old worn out expression, too. I am a pretty old guy who used to work for Boeing as an aeronautical engineer on the 727, and am very happy that people in his generation are excited about seeing the very first 727 flying to the museum. Some of the slang the “kids” use seems a little weird to me, but I agree with David: N7001U’s flight from Paine Field to Boeing Field will be EPIC!

Goddamnit! How hard was it to do this on a weekend? I have school!

At the risk of offending fellow AvGeeks, I wonder why the time, labor and expense in making this plane air-worthy for a 15 minute flight down the road to Boeing Field. I know it will be a wonderful event, a great experience for the flight crew and volunteers and who get to see it take off or land, but I wonder how much $$ the Museum of Flight could have saved to apply to other restoration efforts by removing the wings and putting it onto several flatbed trailers and sending it down I-5.

Not meaning to be a buzz kill here; maybe that’s just my jealousy in not being there to watch it fly showing through–and with any luck I’ll be able to see it in person this summer in Seattle.

I know it will be spectacular!!

It is a valid question. No matter what the MoF spends their money on, there will always be people questioning if that was the right call. Like with all the space stuff, I was like, “cool, but save the 747 please!!!” Things can be complicated when you have a large donation and they require it to go to a particular area or product.

Really, this has gotten the MoF quite a bit of attention. Plus, there is something special to see it down at Boeing Field and know that it is still flight-worthy.

Lastly — you can’t always follow logic and the money. Sometimes you just need to do something because you can and it will be awesome :).

Anyone interested in N7001U’s story should follow the link to Bob Bogash’s website. This airplane is very special. It is the prototype 727, and after it finished its flight test duties it was released to United Airlines where it spent its entire professional career. Boeing had a lot of trouble with its customers and the development of the 707. They were producing KC-135’s long before the first 707 was delivered, and details like the cabin width for the 707 kept changing. Boeing spent a lot of time talking with its customers while the 727 was being developed, and to emphasize that they got it right they put the prototype into commercial service. N7001U flew a very long time for United , and the museum is very fortunate that Bob Bogash arranged for her to be donated to the museum. Volunteers have been restoring her and most of the parts have been donated. It may be that it will actually cost less for her to fly to Boeing Field than it would have been to partially dismantle her and arrange to move her over ground. Jet airliners are huge and things like power lines cause real problems. Never mind the practical considerations. If you are a romantic and you know how much the 727 meant to Boeing and commercial air travel, then you have to let her fly to her final roost. Check out the number of hits that Bob Bogash’s website has been getting. This is a special event and N7001U is getting the attention that she deserves.

I agree that this will be EPIC – and I do not believe any of the money spent on this is wasted. How much interest from the media (and subsequently AvGeeks all over the world) would have been generated by disassembling the aircraft and sending it down I-5 on several trucks have generated? How much additional traffic for the Museum of Flight would that have generated?

I am very familiar with the FAA Ferry Permit process, but it is still a real shame that this flight has to be so short.

DPB, PLEASE get some pictures for those of us who live in “flyover land” and cannot make it to this event LIVE!!

We are going to try our best to cover it live. We are a bit short-staffed and I am starting to get sick, but going to try and haul myself out there no matter what. Either way, we will be sharing from different perspectives on our Twitter account!

It is too bad that she won’t go on some kind of grand tour before she finishes her flying days at Boeing Field. I would have liked her to drop in at Renton before she retires. I think her flap transmission(s) is/are seized and she is making her last flight with the flaps mechanically locked at 15 degrees. She will fly gear down to avoid any possible troubles there. She will be in the best of hands with Captain Tim Powell and his crew. I am stuck in Denver with many obligations this week, but I am just about to chuck it all, jump in my car, and drive to Seattle to see this!

Sure would have been cool if they’d asked aviation types like yourself if you wanted to be on that flight. Think of the additional publicity the MOF would have had for months going forward. Something you guys would never have forgotten.

We would have loved to have David on board for this last flight. However ; FAA regulations on ferry flights of this type restrict it to essential crew only.

Out of curiousity,why does the gold stripe stop under the United badge on the right side,and stops short of the badge on the left side? Why not all the way to the radome?