With Aviation Geek Fest fast approaching and in the spirit of AvGeeks everywhere, I am giving out my tips on spotting at Paine Field (KPAE) in Everett.  Known predominantly as the location of ’œthe Boeing Factory’ it can be an AvGeek’s dream or nightmare. Here are some of the tips and tricks from a local AvGeek who calls KPAE his home base…

You could take photos just like this using our guide.  Photo by David Parker Brown / AirlineReporter.com

Paine Field (officially known as Snohomish County Airport) is located in Mukilteo/Everett, roughly 30 miles north of Seattle.  In relative terms, it’s about 30 minutes or so north on I5 from downtown (if you’re not during peak Seattle driving time that is).  Originally an Air Force Base in the 50s it became the home of the Boeing Factory when the 747 factory line was built on the site, the rest from that moment is history.

The airport has three runways (two parallel & one cross runways) though the one predominantly used is 16R/34L.  This runway is the site where every Boeing wide body since the first 747 has had its first ever flight; pretty good landmark.  The field also has a number of other aviation related tenants including ATS (Aviation Technical Services) who do the maintenance work for Delta, Hawaiian, Southwest and Alaska Airlines, along with a number of local AvGeek attractions including the Future of Flight, Historic Flight Foundation & the Flying Heritage Collection. 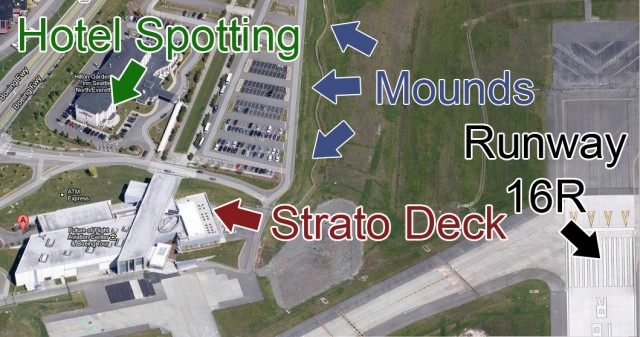 Some key places to spot at Paine Field. Orig image from Google Maps.

The two primary locations that most AvGeeks are going to be interested in are ’œFuture of Flight/The Mounds’ or ’œThe Wind Sock’.  These two locations border 16R/34L and at different times mean different kinds of views available.   The rough guide is:

To help you find your way to these two locations, a great new site Aviation Photographic has a great little guide to spotting at Paine Field with a map that will show you an easy way to identify these locations (even if from a satellite image). 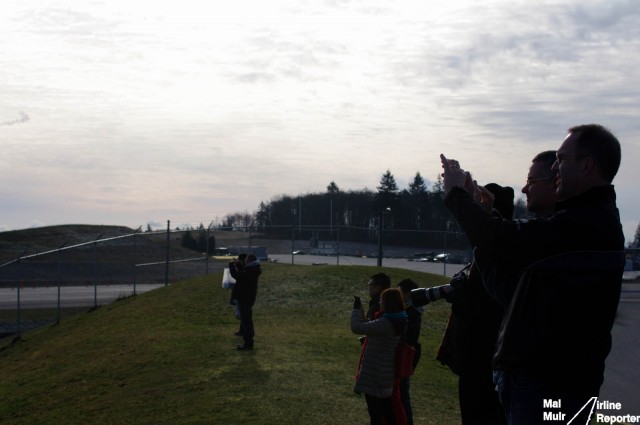 People lined up on the mounds outside Future of Flight, to take photos of an aircraft departing. Photo by Malcolm Muir / AirlineReporter.com.

Weekdays are by far the best time to spot at Paine Field with the factory and test flights in full force.  Flights come and go at random times and although Flightaware.com can be a great source at times, you need to live by one rule at Paine Field:  Boeing Time.

What is ’œBoeing Time?’  It is really just a way to describe that if you are an avid spotter, out to get that brand new aircraft fresh from the factory, be prepared to wait’¦.. a lot.  Because these are test flights, so there is no guaranteed time of departure. They either pop up at the very last minute or more often than not, they run late.

Usually you can rely on the Dreamlifter schedule which are operated by Atlas Air. They show up on Flightaware as GTI4*** (where *** is the rest of the flight number), and they come at all hours of the day or night.  You can sometimes get a Southwest or Alaska or Delta 737 coming in on the weekends for maintenance, although most of the time this is during the middle of the night.

Boeing 787s on the flight line at Paine Field. Photo by Malcolm Muir.

A couple of extra little tips and/or tricks for you:

Hopefully the guide can help you enjoy your time at Aviation Geek Fest (or any time in Seattle really) that little bit better. If you have photos taken from Paine Field you want to share, put them in the comments — we would love to see them.

https://www.airlinereporter.com
Things to Do While Visiting Seattle: It is Not Just About Aviation
Not Breaking News: American Airlines & US Airways Merge
2 Comments

Just returned from SEA and Boeing. In a word…..”simply amazing”!

Awesome! Glad you enjoyed it 😀