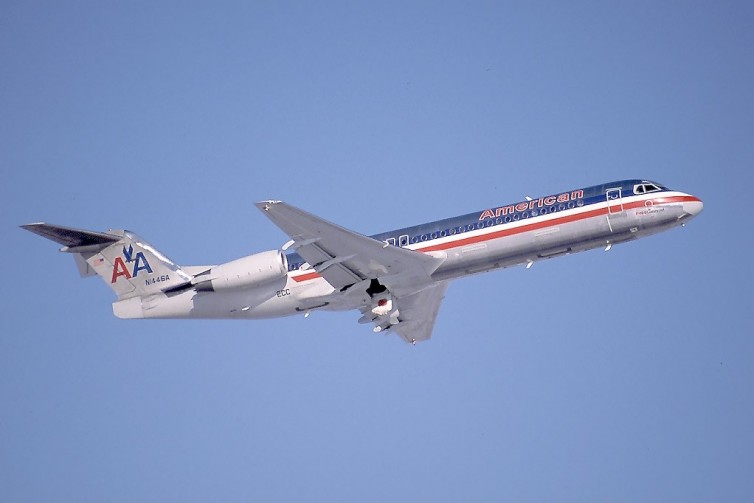 Austrian Airlines VIE-BUD: Before the Flight

Getting from the city center to the Vienna airport is easy, with two different train options to choose from, both taking you directly to the terminal sublevel. The City Airport Train (CAT) costs €11 each way (or €17 round trip) and makes the trip from Landstrasse/Mitte Wien Station to the airport in only 16 minutes with no stops (and only previously stopping at main hubs). The Schnellbahn (S-Bahn) is a local train that makes every stop from Landstrass/Mitte Wien to the airport, but costs only €4 total (or using a day pass, only an additional €2 zone fee) and only takes about 10-15 minutes more. One other minor difference: the S-Bahn cars lack the luggage racks featured on the CAT.

Not being in a rush, we opt for the S-Bahn and arrive at the check-in counters with plenty of time. Whether the airport flow was efficient or it’s simply a smaller, less-used airport (probably a little of both), we found VIE to be the most relaxed airport experience on our trip. The signage was clear, and checking in was a breeze, even if it was just to get our boarding passes. 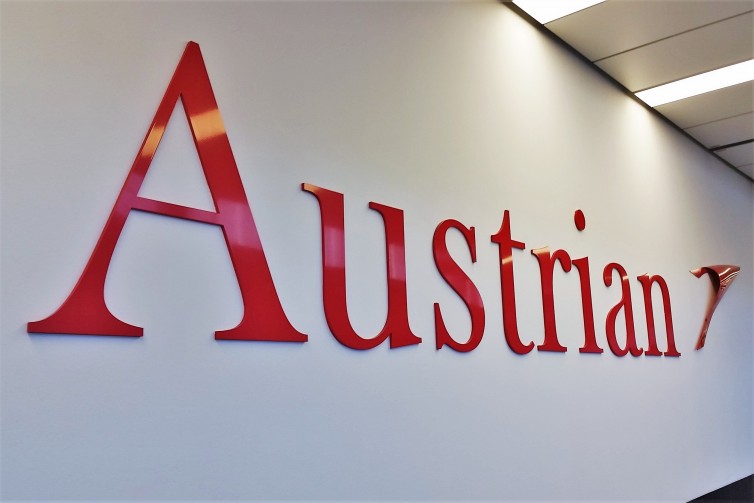 VIE is a smaller airport, and with Hungary being part of the Schengen Treaty, we didn’t need to go through any passport control, so after a quick security check, we got to our gate within 10 minutes of checking in. Having a bit of extra time, I went to a nearby kiosk and got myself a decent (but disappointingly cold) schnitzel sandwich. 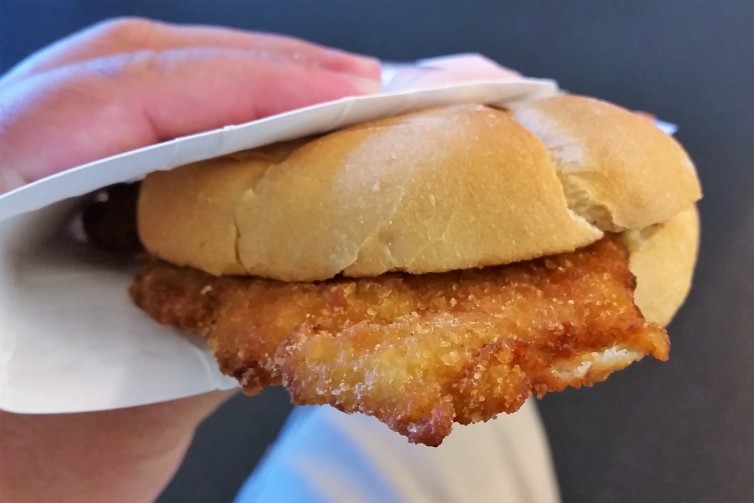 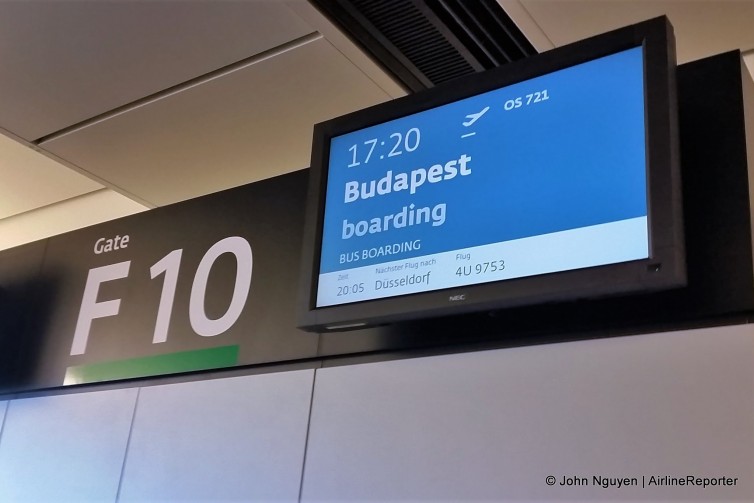 Gate monitor for our flight from VIE to BUD on Austrian

In due time, boarding was announced for our flight, and it was only then that I noticed the little words on the monitor… “Bus Boarding.” Apparently the majority of Fokker flights depart from bus gates, leaving the jet bridges available mainly for larger aircraft. So down the escalators we went to the waiting bus, which thankfully wasn’t packed tightly before departing; it was almost civilized. I also noticed an unusual vehicle next to us, something I’ve never seen before; it was like a scissor truck, with the driver inside the compartment itself and a loading door on the front, to reach planes that are not parked at a jet bridge. It’s pretty fun to see how different countries meet the needs of its disabled passengers. 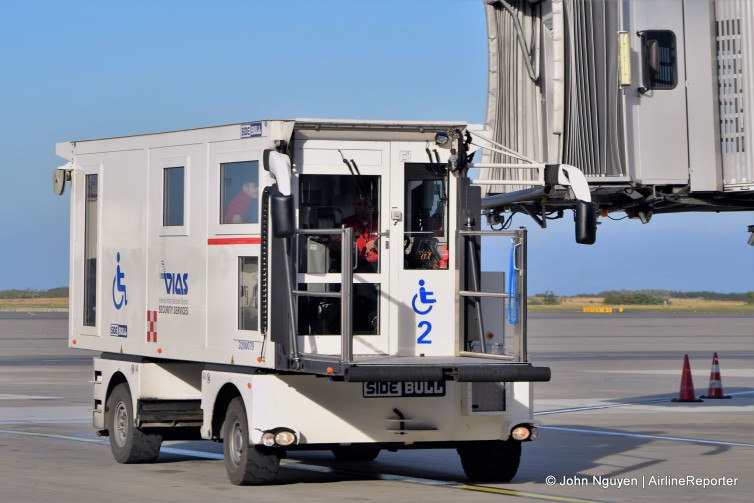 At VIE, a special scissor truck to load disabled passengers into aircraft without jetbridges

I actually don’t mind bus gates too much, since I get the chance to do some planespotting, and on this trip I had plenty of room to maneuver and switch windows. I got my load… of Fokkers. 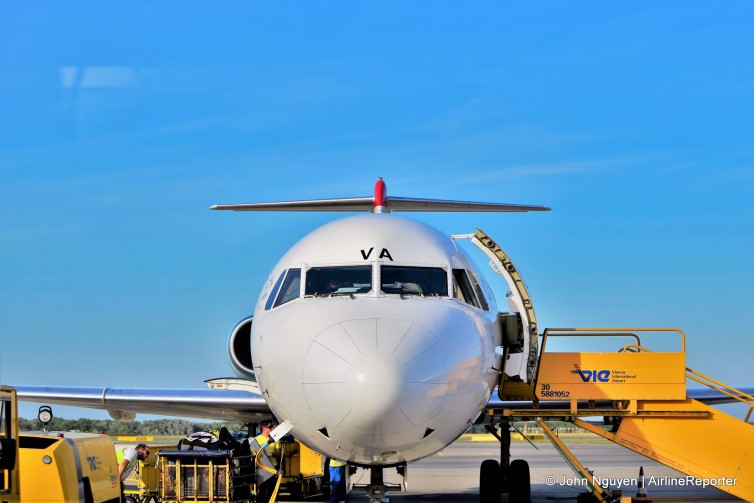 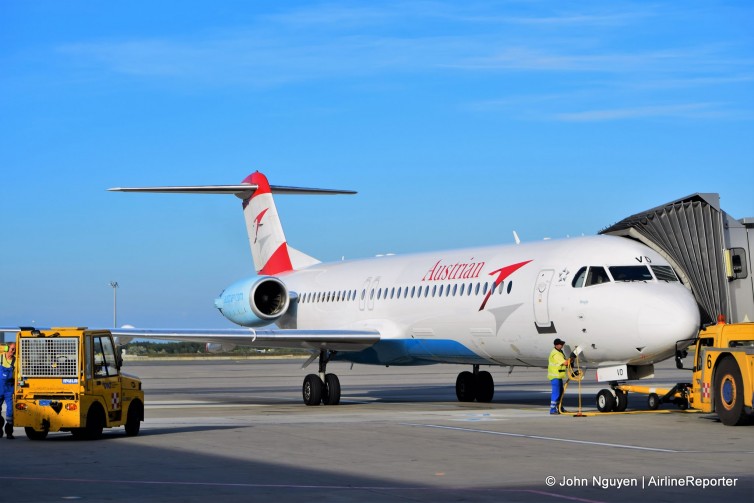 OE-LVD, an Austrian Airlines Fokker 100 parked at a jetbridge at VIE 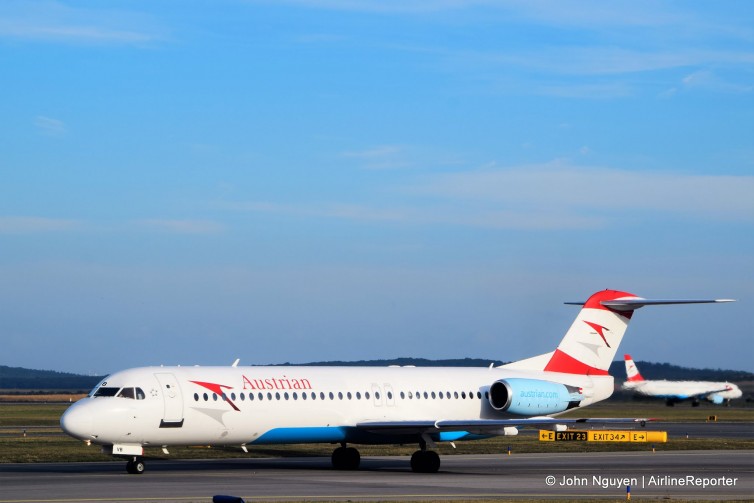 OE-LVB, an Austrian Airlines Fokker 100 taxiing at VIE, with an Airbus A320 off in the distance 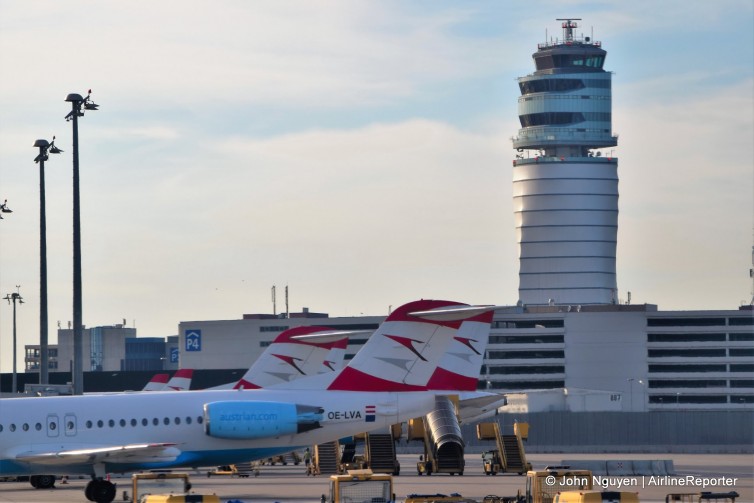 After a short meandering ride along the tarmac, we finally reach our plane for the short flight to BUD, a Fokker 100 (OE-LVN). We were held on the bus for a few minutes as they were still cleaning the cabin, enough time that the second bus of passengers arrived and parked next to us. Since the flight was only half-full, we weren’t too worried about overhead space.

The bus doors opened up and passengers took their time, even yielding to each other… no pushing, shoving, or half-running to beat everyone else. There must be something in Vienna’s water (incidentally, glacial water runs through the system, so you can drink from the tap!), but everyone was mellow and enjoying the fact that they were about to experience the miracle of human flight (or at least that’s how it felt… it should be like this all the time!)

Austrian Airlines VIE-BUD: Onboard our Fokker

The flight attendants cheerily greeted each of us as we boarded. F100s hold a special place in my heart, having flown them so many times when American Airlines had dozens in its fleet. In fact, OE-LVN was originally delivered to American in November of 1991. Along with the MD-80, the F100 fell out of fashion (and Fokker itself went bankrupt in 1996 after a 77-year run), but I’ve always loved the 2-3 configuration in economy. Austrian has 14 F100s and six F70s in their fleet, though as of this publication, OE-LVN and most, if not all, Fokkers have been sent to storage, being replaced by 17 Embraer 195s. At the time, I was glad the Fokkers had found a second useful life.

Like many other European carriers, “business” class on this plane consisted of economy seats with a tray blocking the middle seats… at least on the 3-seat side. For extremely unlucky business passengers traveling alone, those assigned on the 2-seat side may very well be rubbing shoulders with their seat-mate. 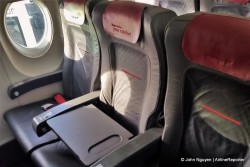 The economy seats of an Austrian Airlines Fokker 100 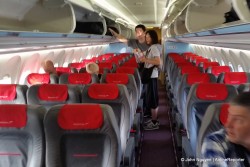 The economy cabin of an Austrian Airlines Fokker 100

We reached our exit row seats, 14A and 14C, which had ample leg room, but even the regular rows have more pitch than average; these F100s previously had 105 seats, but one row was removed a few years ago to reduce the required number of flight attendants (one for every 50 passengers). Each seat had a small water bottle placed on it, which is always appreciated, but rarely done nowadays.

Austrian Airlines VIE-BUD: Up, up, and away, Fokker!

The passengers quickly settle into their seats, the door was closed, and the flight attendants did their safety demonstration in both German and English. With that, we pushed back, and being at one of the outer bus gates, we reached the runway in just a couple of minutes. With the pattern empty and an immediate clearance for take off, our driver didn’t even slow down… just a turn onto the runway at speed and we were instantly roaring (gotta love those old Fokkers!) into the hazy sky. 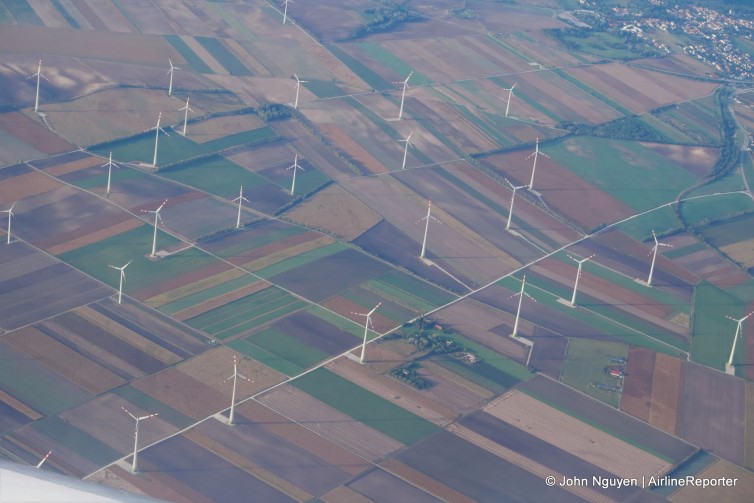 Wind turbines in the Austrian countryside 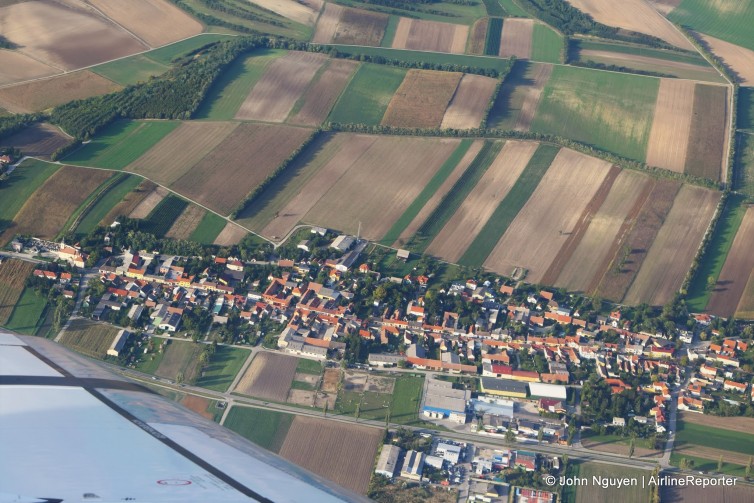 Taking off from VIE and turning over a small Austrian town 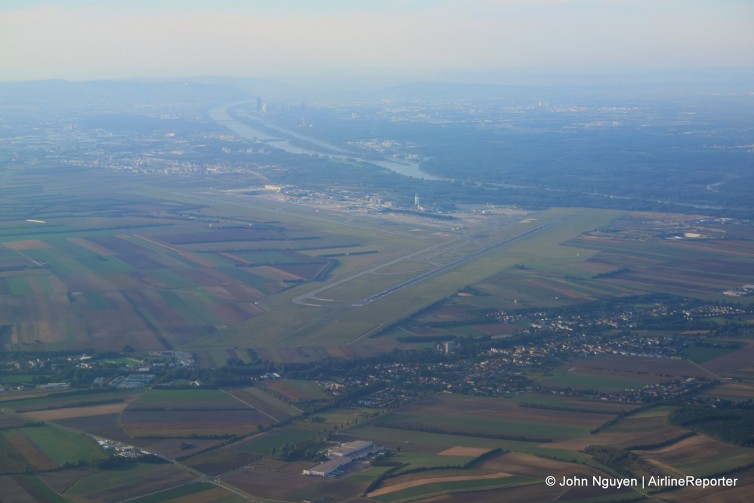 Looking back at VIE

With 45 minutes blocked (it was really a 30-minute flight, if that), the flight attendants managed a quick beverage service, and we actually landed a few minutes early into BUD. A short taxi later, and we found ourselves… at another bus gate (no love for the Fokkers!) Deplaning was just as civilized at BUD, with a short 200-meter bus ride to the doors of the modern terminal, and just like that, our flash-in-the-pan experience with Austrian Airlines was over, and unbeknownst to me at the time, I was bidding adieu to Fokker service.

As brief as it was, our experience with Austrian was quite pleasant, and left us in high spirits for our visit to the great city of Budapest. 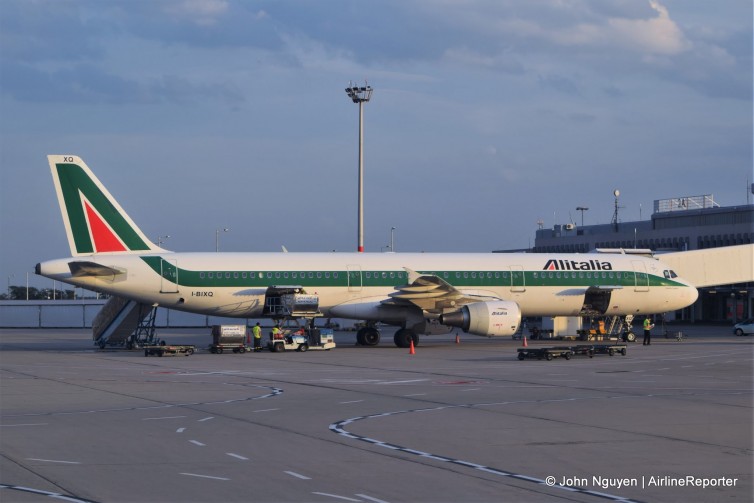 An Alitalia Airbus A321 (I-BIXQ) parked at BUD 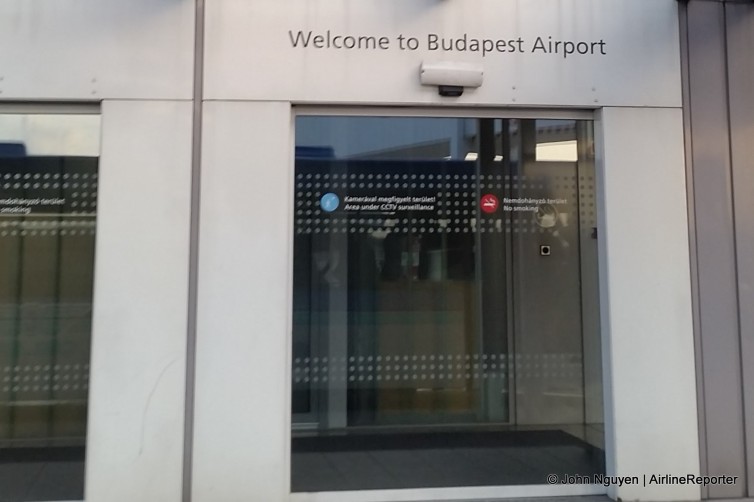 Transferring from plane to terminal via bus at BUD

Update: Reader Starvros knows what happened to Austria’s Fokker fleet… it was purchased by Alliance Airlines in Australia to supplement their own Fokker fleet.

http://VNAFlyer.blogspot.com
Canceling Our Mexico Trip Because of Zika – United Airlines Made It Easy
Flying on an Airnorth Embraer E-Jet
10 Comments

Hi Starvros, thanks for tracking down that article. Very interesting (and very synergistic) deal. Looks like I may have to head Down Under again to meet some Fokkers!

Normally in Fokker Businessclass the seat next to you is free on the two-seat-side, too. On Lufthansa or SAS CRJ they even use to do this shifted so there’s nobody reclining in front of you.

Thanks for clarifying, Hendrik! There were only a couple of business passengers on our flight that day, and they were seated on the 3-seat side, so didn’t see the single-seat in action. I’m trying to remember a flight I took where they did do two pax on the 2-seat side (and thinking how I was glad to be sitting on the 3-seat side), but it’s escaping me right now.

Quite a few Fokkers down here mate.

Come down and meet them!

I may have to! Was just in Sydney in December but didn’t take any domestic flights. Alliance Airlines claims the largest Fokker fleet, and they just added to it, so who knows…

I can still hear the whine in those engines!

You know, those old Fokkers had a solid “mechanical” feel to them when they took off, something modern airliners are missing, for better or worse. It’s like the difference between cruising down the road in a ’70 Corvette vs. a ’16.

My last fokker flights were a round trip from mexico city to huatulco, in 07. I knew then it was my last trip in the f-bird.

Assist forclear up, Hendrik! There were only a twosome of business passengers on our flight that day, and they were seated on the 3-seat side, so didn”t see the single-seat in action.