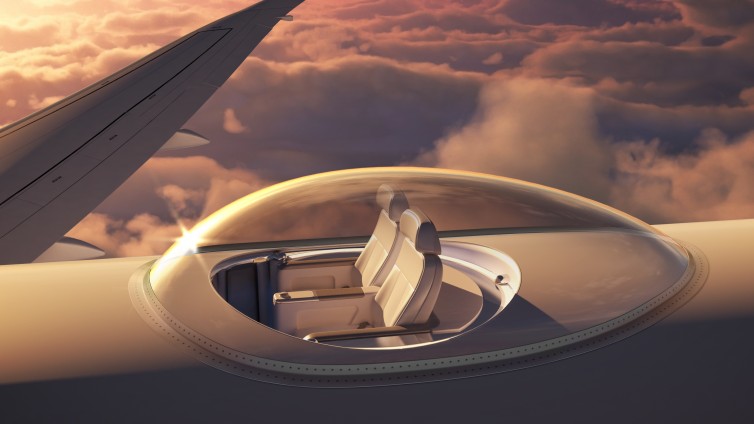 By now, some of you might have seen some bit of news concerning Everett, WA-based Windspeed Technologies’ new SkyDeck modification for large passenger aircraft. If you’ve managed to miss it, imagine adding a big fighter-jet cockpit canopy to the top of a jetliner, with a couple of first class seats inside, and you’ve got the idea.

’œI travel a lot,’ Windspeed Technologies President and CEO Shakil Hussain explained to AirlineReporter. ’œI was trying to find ways to reduce the boredom of long fights and realized over the years that the offerings of in-flight entertainment have not changed much you’re watching a movie on a screen or something else while being confined to a relatively tight space. I was once invited into the cockpit of a 747 in flight the view was unbelievable. I thought that if I could design something to allow the public to access such an amazing view, that this could be even better than what the pilots could see.” 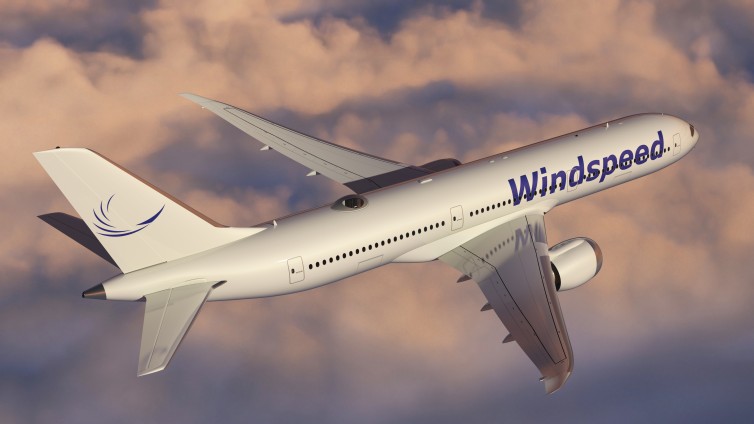 The optimal location for a SkyDeck installation is toward the rear of the upper fuselage – Image: Windspeed Technologies

Right after he finished that sentence, my mind drifted away from the conversation for what seemed a bit too long, but was thankfully only a couple of seconds. It was delightfully easy to imagine myself sitting under a transparent dome atop a 777 at 30,000 feet. With azure above and the top of the fuselage stretching out into the distance in front of me as we soared along, I then started thinking about how awesome it would be to be sitting up there while passing in and out of clouds.

But then the responsible part of my brain jarred me back to the reality of being seated on an ordinary waiting-room sofa, allegedly conducting an interview with a busy CEO of an engineering firm who was sharing his valuable time for what was supposed to be a serious interview. Such are the perils of being too close to one’s subject matter. Being somewhat of a practical daydreamer, I used the break to segue into the next questions: how feasible is this thing? What are the chances that we’ll actually have a chance to ride in a dome atop an airliner?

Hussain said that his company has been in talks with Airbus, and the SkyDeck will soon be offered to buyers as both an OEM option as well as a retrofit for existing aircraft. No timeline was available, but Windspeed is ready to get to work ’œas soon as we get an order,’ he said. 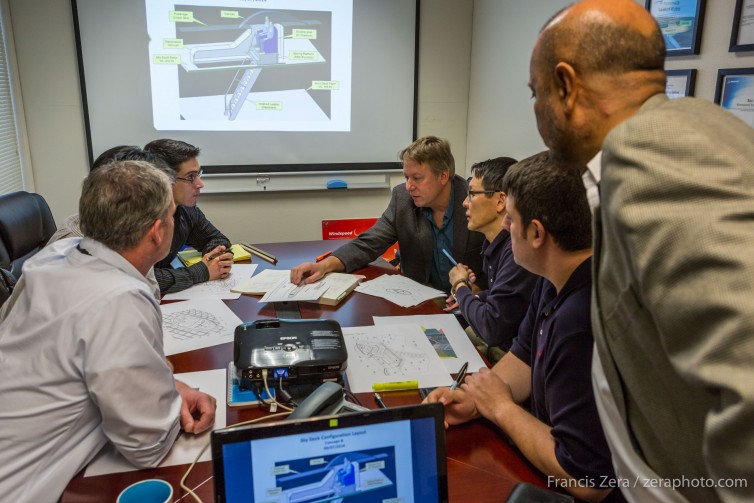 Engineers at Windspeed Technologies work on the design for the SkyDeck

What will the experience of riding atop a jetliner be like?  Hussain explained to me that they are working with a company that will be assisting with reducing noise levels, including providing noise-suppressing headsets with mics so people can talk to one another. The product will have anti-condensation and anti-UV filters in the canopies, which will be made of same material used in supersonic fighter jets, so the structural integrity is assured because the tech is already available and has been extensively tested.

Hussain gets a lot of interesting comments from laypeople, such as asking how he’ll make sure the canopy doesn’t pop off in flight, he said with a laugh. ’œAt the end of the day, everything will be extensively tested and FAA certified.’

His company’s stock in trade is providing engineering support to the aviation industry, so designing the SkyDeck wasn’t that tall of an order. Doing the engineering work for the the necessary structural modifications, aerodynamics, flight loads (including bird strikes), and addressing FAA requirements for safe passenger ingress/egress to the viewing dome was all done in-house.

Engineers examined how to reduce the aerodynamic drag that would be created by the relatively large dome atop the fuselage, such as working to eliminate potential problems with the control surfaces on the vertical stabilizer. ’œOur analysis shows that shaping the canopy as a teardrop and adjusting the height mitigates that problem. Positioning the canopy at the rear of the aircraft would produce negligible drag,’ Hussain explained. 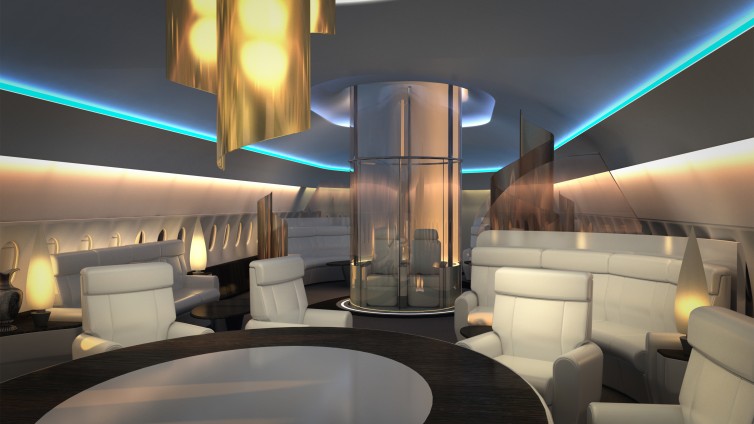 A rendering of an elevator system for a SkyDeck on a large aircraft – Image: Windspeed Technologies

Once the first order arrives, Windspeed anticipates that it will take approximately 18 months from the time the order is received to having the dome fully installed, tested, and FAA certified. Once an installation on the first plane of a given type is completed, future installations on aircraft of the same type would take much less time; he said perhaps two or three months per plane. ’œWe are in the midst of the development, so we have looked at all possible angles of concern and managed to resolve them all,’ he said. 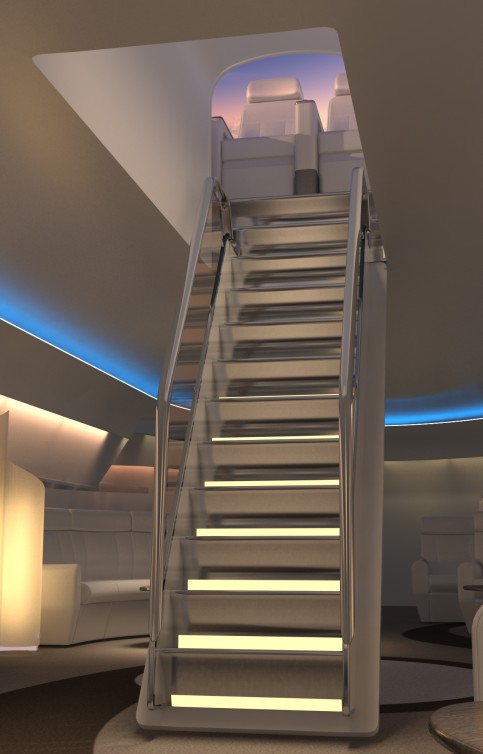 A rendering of a staircase leading up to a SkyDeck on a large aircraft – Image: Windspeed Technologies

Imagining the potentially long waits for one’s turn to spend a few minutes in the dome, I wondered aloud if it would be possible to install more than one of them on a large jet, immediately realizing that adding another dome toward the front of the fuselage would spoil the view for those seated in the one closer to the tail.

’œYou could put multiple SkyDecks on a plane, but the cost would be a big concern,’ Hussain told me. How much of a concern? ’œWe’re currently estimating a price range of between $8-$25 million per unit because there are so many different variables do they want a single seat, a double seat, a staircase or an elevator, and so on.”

For example, a smaller business jet (with a staircase) could bring the price down to the lower end. And if they receive multiple orders, the price could go even lower.  Hussain hopes airlines that have the Skydeck will draw more passengers than those without one. 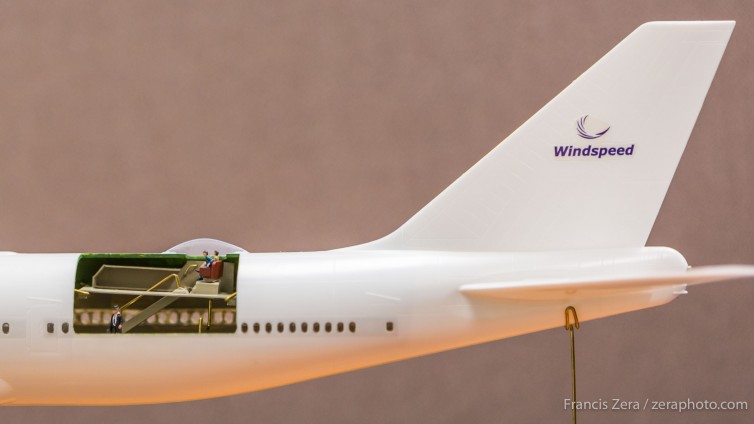 A model of a Boeing 747-8 with a SkyDeck installed sits in the offices of Windspeed Technologies in Everett, WA

Hussain said that airlines may have to give up a few revenue seats to accommodate a SkyDeck in a given aircraft, ’œbut we believe the airlines could make tons of money by charging customers on a pay-per-view basis.’ Tons of money, indeed. My credit card is ready.

http://www.zeraphoto.com
2016 Guessing Game: Where will the ME3 expand in the US?
Is a Merger Between Spirit and Frontier Inevitable?
2 Comments

What the Heck and Why Not? The next time I order a new 747-8 or 787-9 for personal use, I’ll certainly spring the extra $10Mil for one of these. No personnel elevator needed, but a dumbwaiter for the beverages and meals would be nice. Wile I CAN see it on a well appointed BBJ, it will never ‘fly’ as a shared novelty on a commercial jet. Why? If I ever got my butt into that seat, even high-order explosives could not get me out.
(For the sake of the company’s staff, I’m glad that they have other business lines…) -C.

Scratch the ‘Wile’ and make it ‘While.’