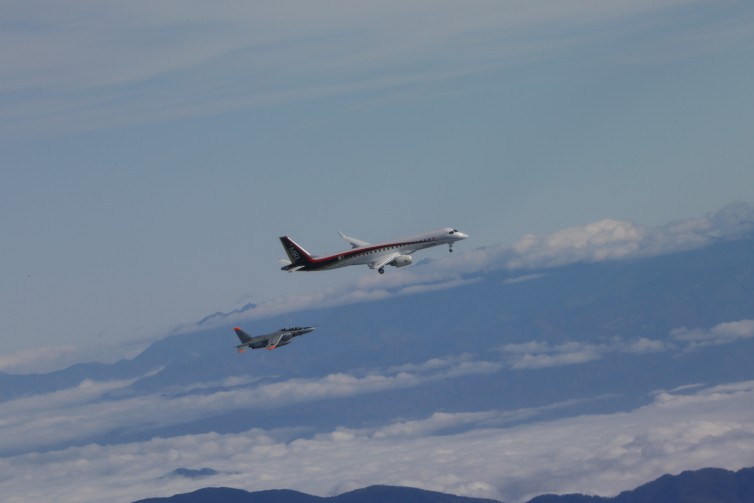 The MRJ and chase plane fly together – Photo: Mitsubishi

According to one of the pilots, the first flight was a success. ’œOperational performance of the MRJ was far better than expected. We had a significantly comfortable flight,’ said Captain Yasumura. 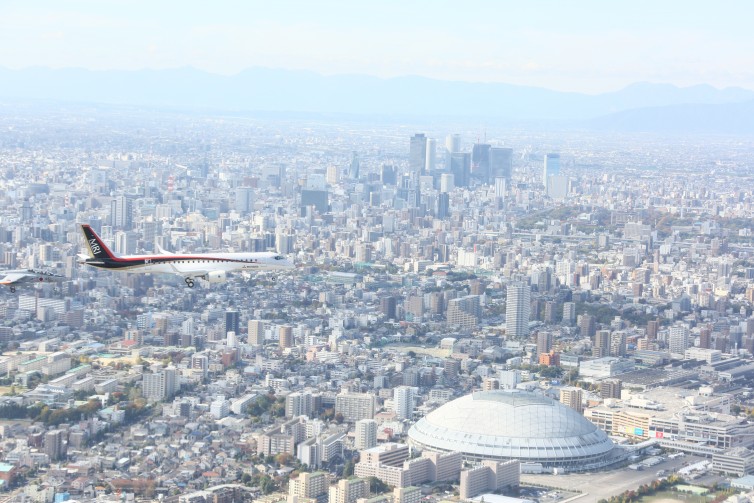 The MRJ flies like a champ and starts flight tests- Photo: Mitsubishi

Like many first flights, it has been delayed, the last due to a faulty rudder pedal. However, after completing about 2,500 hours of flight tests, the first plane is expected to be delivered during the second quarter of 2017. 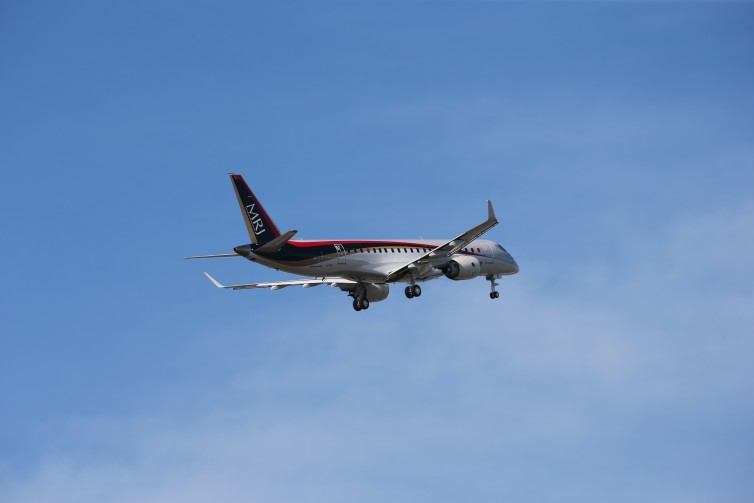 The MRJ completed its test flight with landing gear down – Photo: Mitsubishi

Much of the flight tests will be based out of Grant County International Airport (MWH) at Moses Lake, where Boeing also completes some of its own flight testing. 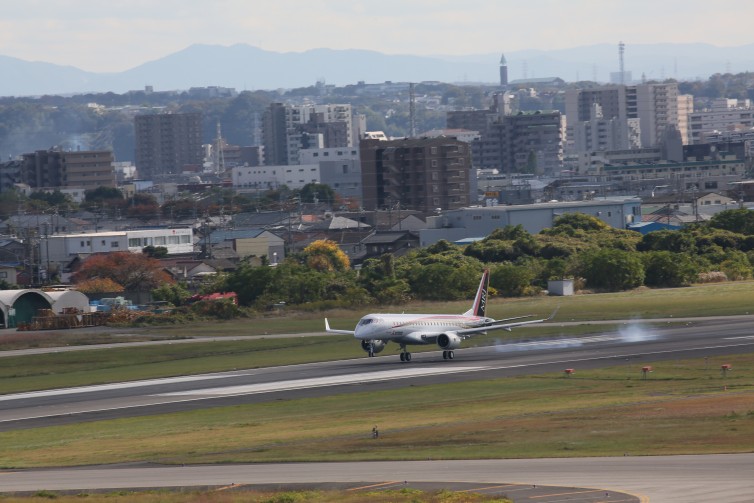 A successful flight by the MRJ – Photo: Mitsubishi

Part of the work will be putting the two Pratt & Whitney PurePower 1000G family engines to the test. P&W and Mitsubishi has developed the PW1215G and PW1217G engines together.

“Over the course of our history, Mitsubishi and Pratt & Whitney have worked to innovate and create new technologies that advance the passenger travel industry,” said Greg Gernhardt, president, Pratt & Whitney Commercial Engines. “What we have accomplished together is truly impressive and we look forward to continuing on this path forward.” 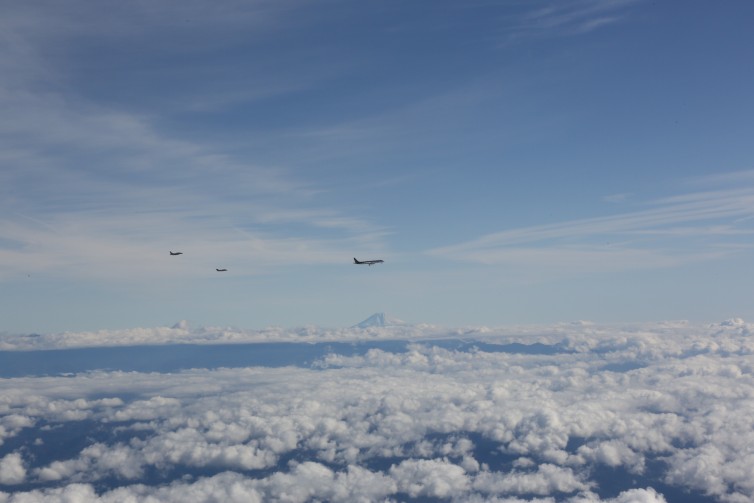 The MRJ70 is designed to hold 70-ish passengers (78 with a 29″ seat pitch) and the MRJ90 will hold (wait for it…) around 90. This puts the aircraft in competition with Embraer and Bombardier regional aircraft families.

To date, there have been over 400 orders/options for the MRJ, with Sky West, Trans States Holdings and Eastern Air Lines having the most. 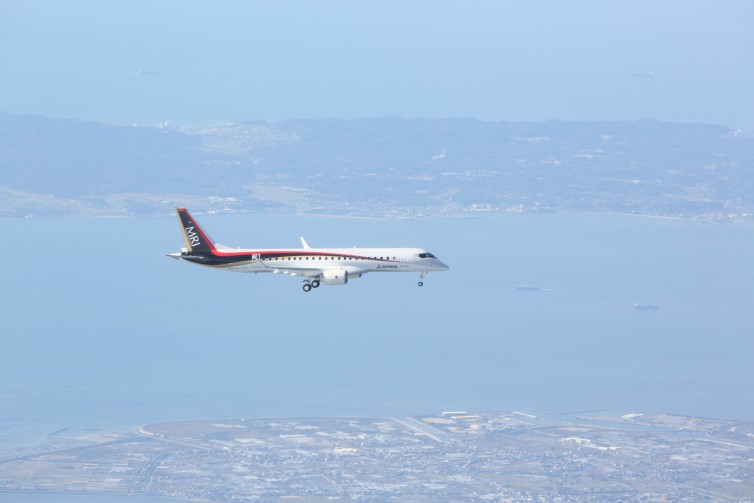 The Mitsubishi Regional Jet during its first flight – Photo: Mitsubishi

It will be interesting to see how the MRJ might shake things up in the regional jet market. So far, other than a few hiccups, the plane has been able to prove itself, now it just needs to deliver on expected efficiency and start flying passengers.

This airplane looks like and fly’s like any other regional jet out there! We have given everything else to Japan why not another useless regional jet? Who cares?

Hmm. I am guessing there is more here than just a regional jet, but I will leave that to you my friend. Any new aircraft introduced to the market is a pretty big deal.

What a little beauty!

Have they decided how to get the test plane(s) over to MWH yet?

Is there a reason why they didn’t bring in the landing gear during the whole flight? Those look like pretty high altitudes with the gear down. Wonder if that might be one of the ‘hiccups?’

A truly handsome new RJ to be sure. Mitsubishi (and Japan) want to become big players in the RJ market and I think they are well on their way. Achieving the critically important Type Certificate *may* occur a a bit sooner than Mitsubishi or most observers have in mind. As long as the machine works well, – and as advertised – Mitsubishi should have no fear. I wish them well. If anyone knows, have they ever made/sold a commercial airplane before?
((OK, a fair post. At the end of the day, the hired hand, in Denver as I recall, should continue to edit every AR post for content as well as simple copy details. That kind of editing really does separate the men from the boys; the genuine professionals from the amateur hacks and it does make a difference. In short, the cleaner and tighter the posts, the more sponsored review invitations AR will receive. Yup again, it really is that simple. The AR team has come a very long way and very quickly. The improved quality shows and I love it. As long as Airways Brewing’s Sky Hag sticks around for a while longer, I’ll be the Happy Camper. [Truth is that I never touch the stuff], but if ever there was a winning advertising graphic, the Ms. IPA Hag is the winner. Cook think you forks are doing just fine.

If they’ve built the ZERO during WW2 they can build any plane..

In a way its almost shocking that there is yet another unknown regional jet coming to market….especially when Embraer and Bombardier pretty much have an established product line…..I can’t say that I would be rushing to buy or fly on an MRJ…..not a hell of a lot to differentiate from the existing products out there…and unless there is a lower selling price, if I was running an airline, I would likely look to either the CRJ or CSeries……or maybe Embraer…..but Mitsubishi???