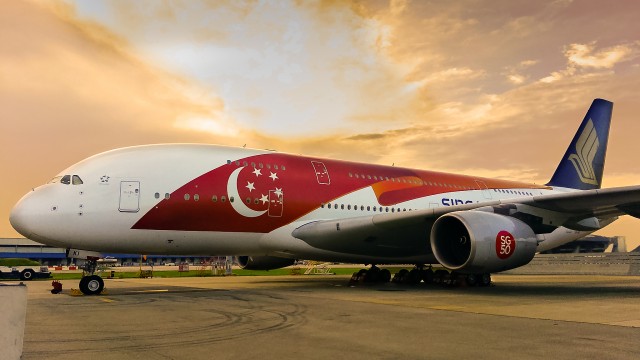 NOTE: The contest has now ended. If you didn’t win, but still want of these sweet models — you can still buy one direct. Thanks for participating and wait for our next one!

Luckily for us, many airlines have come up with special liveries over the years creating an extra sense of wonder when you spot one out in the wild.

Recently, Singapore Airlines unveiled a livery to celebrate the country’s 50th anniversary (SQ50) and we wanted to do a little celebrating with them and you. The airline was nice enough to offer two (very nice) models of the Airbus A380, wearing this livery. Read on to learn more and to possibly win! 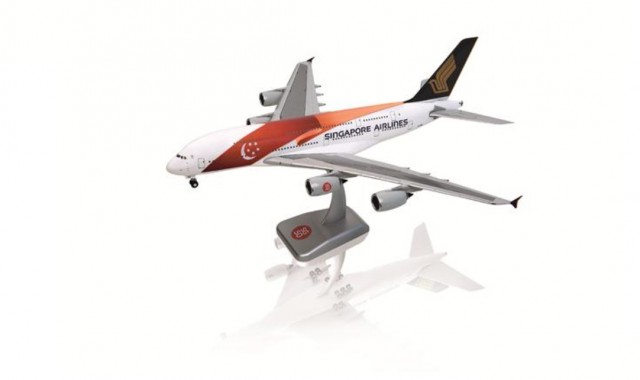 The 1:200 model up for grabs – Image: Singapore Airlines

ABOUT THE SINGAPORE AIRLINES SQ50 AIRBUS A380 MODEL

According to the airline, this model is, “a limited edition replica of the Singapore Airlines SG50 livery aircraft. Made of hard ABS plastic with a perfect snap fit construction, this highly detailed superior graphics true-to-scale 1:200 A380 model comes with landing gears and a display stand.”

If you do not end up winning and still want to get one… you can. They are $128 (plus a 10% discount going on right now) on the Singapore Airlines Kris Shop. 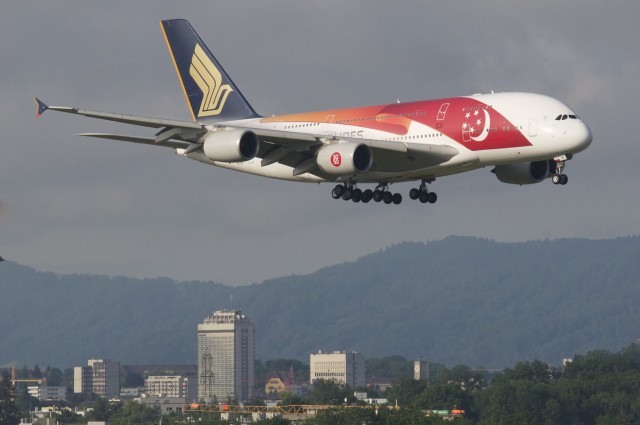 There is no missing this livery, especially when it is on the giant A380. On both sides of the aircraft is a large Singaporean flag-themed design and the inboard engines have a SG50 logo. Making a design like this isn’t easy – here are some interesting facts about the design: 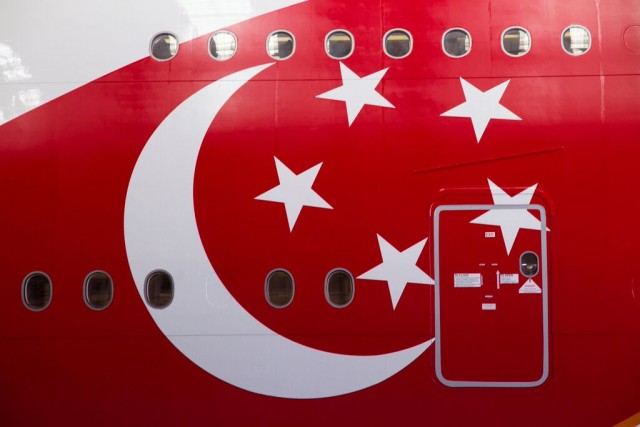 Close-up of the design of the SQ50 A380 – Photo: Singapore Airlines

The special deal started on Singapore’s Golden Jubilee on August 9, 2015 and they must be booked by September 27, 2015 for travel between September 1, 2015 and May 31, 2016. Book your flight, learn more, and read the restrictions on their website. 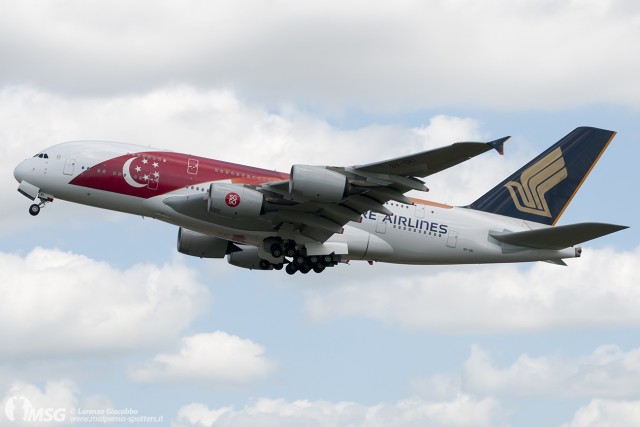 The livery looks slick with a blue sky in the background – Photo: Lorenzo Giacobbo | FlickrCC

HOW TO WIN THE SQ50 MODEL

NOTE: The contest has now ended and comments are now closed. If you didn’t win, but still want of these sweet models — you can still buy one direct. Thanks for participating and wait for our next one!

Let’s get to the good stuff. You probably want one of those sweet SQ50 A380 models. Answer the question below in the comments and the person closest to the right answer will win.

What was the price of a cocktail, in economy, on Singapore Airlines during its launch year (in US dollars)?

One guess per person. If you cheat, you are not eligible. At 5:00 pm PDT on Saturday, August 29, 2015, we will close the comments. The two people that are closest to the correct answer will win. If there ends up being more than one person with the right answer, we will randomly pick two winners.

https://www.airlinereporter.com
Getting a LOT of Value for Your Money – LOT Business Class Review
Flying a Thai Airways A380 in Royal First Class
141 Comments

Trick question – drinks were FREE in economy. Including takeoff glasses of champagne. (I was 15 at the time, and they never refused me).

Cocktails were free I guess for Economy Class. I guess ._.

$0/free (that could get dangerous quickly)

Singapore airlines was the first airline in the world to offer free cocktails in economy class in the early 70s, so the answer is 0$

Cocktails were complimentary then. USD0.00.

Free, no charge. A perk for flying with Singapore.

I believe it would have been free.

I would guess it’s free.

Free. SIA went against the regulations set by IATA by serving free drinks and amenities in economy class in the 1970s.

Absolutely nothing – Singapore Airlines subscribes to the theory that “once a passenger pays
for his or her ticket, there should be no more charges on the airplane”

was free for all the passengers

Zilch, nada, nothing, free, as proven by section 1.3 of this document – http://mahdzan.com/papers/sia/singapore_airlines.pdf. If I win, would you send this to New Zealand?

I believe SQ did not charge for drinks in economy at that time.

As one of the best airlines it was free. This would be right after it’s split with Malaysian Airlines after Singapore became independent.

Question :
What was the price of a cocktail, in economy, on Singapore Airlines during its launch year (in US dollars)?

I’m gonna guess back then, it was figured into the price of the ticket anyway, and claim cocktails were “FREE” !!

All Food Drinks on my Vintage Jetliner Flights are FREE !

Just click on my user name to book your flights, seating is limited 🙂 !

I am going to go with free

I would guess that they were free.

I think if was free so $0.00.. But you were only allowed one free cocktail

Was just a twinkle in my parents eyes back then. But my Dad believes they may have been free.

Followed by a comment that “noting is ever free nowadays”

I think it was free and many have already mentioned it. So I am going with $0.01

It would be free. In the “good old days” of flying weren’t the drinks free???

They were probably free.

Trick question. They did not offered economy class in 1947!!

Free, I think they have always offered this.

It was free, that was the differnce with other airlines

If you go back to the origin of the airline in 1947 (thanks Wikipedia!) I doubt there were any cocktails served. But going with the 1972 date, I’ll go with free.

It was free in economy class!

I’m guessing free, since I think they still are.

There were offered free of charge I believe, that is US$0.00.