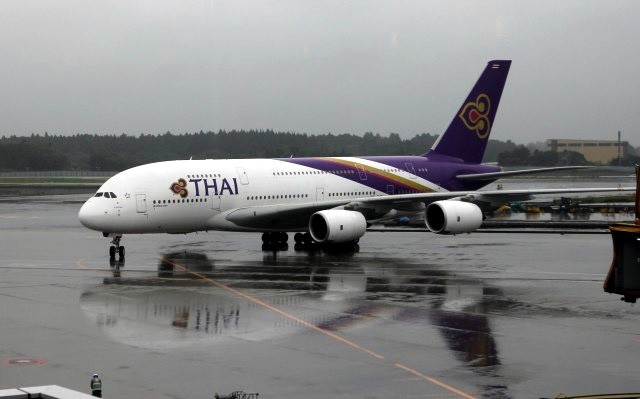 Our seats in the ANA lounge had a great view of ourÂ A380Â arriving and taking its position at the gate.Â We watched the cleaning crew and catering staff swarm the plane, frantically working to make a quick turn with a massive plane. It was indeed a surprisingly short time before the airlineÂ representative reappeared and informedÂ us that it was time to board.

When we got to the gate, another airline representative escorted us down the jetway and onto the plane. Â We were met at the door by the head purser, who introduced herself and greeted us by name beforeÂ showingÂ us to our seats in 1E and 1F, in the center section of the upper-deck Royal First Class cabin. 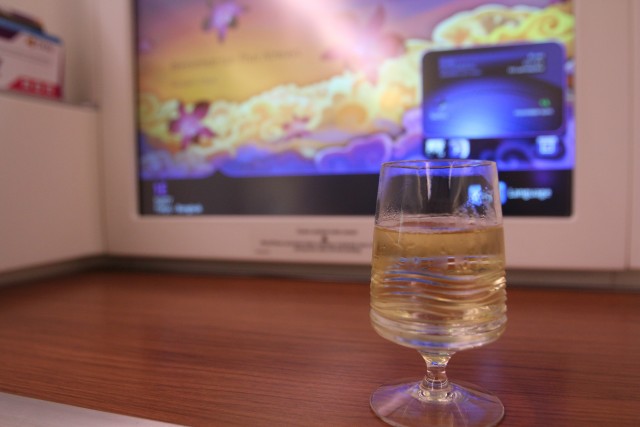 Once we had taken our seats, we were offered Dom PÃ©rignon champagne as a pre-departure drink. Talk about an offer you can’t refuse! 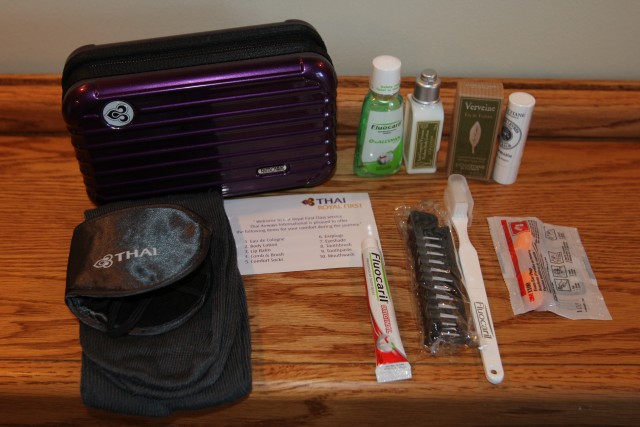 The seat came with a well-stocked Rimowa amenity kit. Â I’m definitely holding onto this one! 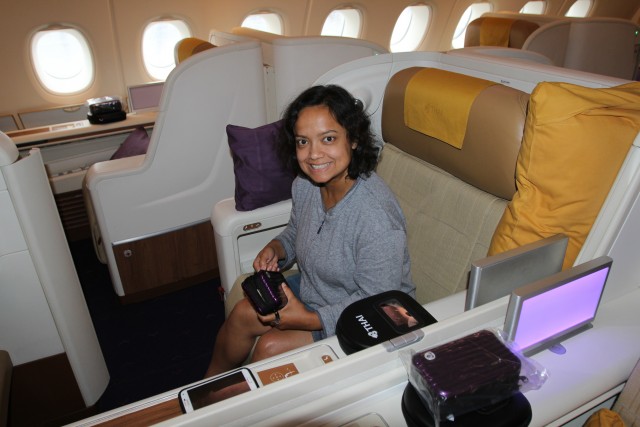 My wife checking out the first class seat on Thai’s A380 – Photo: David Delagarza | AirlineReporter

The two center seats worked well for my wife and I traveling together. Although we’d earlier had a wonderful flight on ANA’s first class, it had been challenging to communicate with each other as it required us both to lean forward and communicate through a ‘window’ a few feet in front of our seats. Thai’s arrangement felt much more natural.

The one thing about the seat that confused me somewhat was a screen light next to the seat. This light emitted a brilliant purple glow, but not quite enough to eat or read by. Â I’m not quite sure what to make of it, and the few times I turned it on in the flight, it was not very useful. 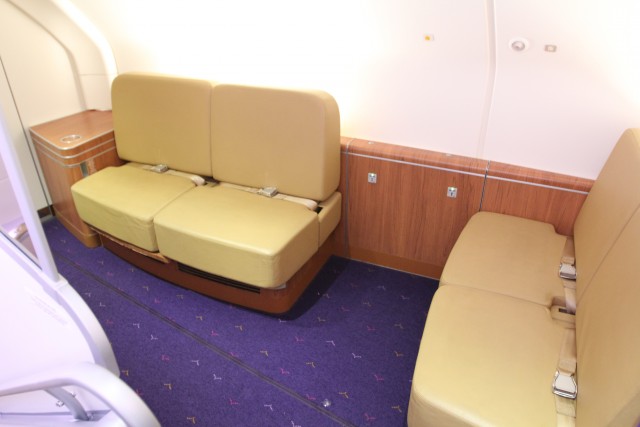 Next, I checked out the rest of the first class cabin. The forward section of the cabin has a lounge seating area, which is a nice place to stretch your legs during the flight. 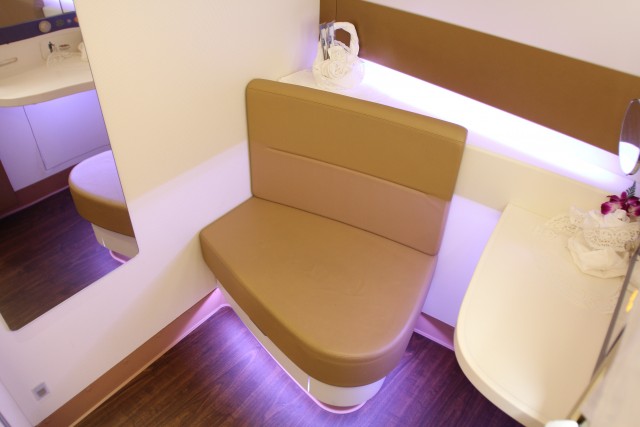 The lavatory at the front of the cabin was incredibly spacious, including a small loveseat area. ItÂ also had a number of hand creams, a small selection of soaps, Eau de Toilette, lots of towels, and several of Thai Airways’ ubiquitous orchid flowers. 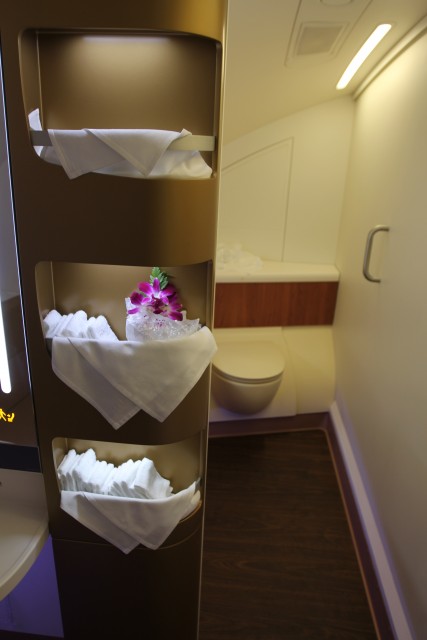 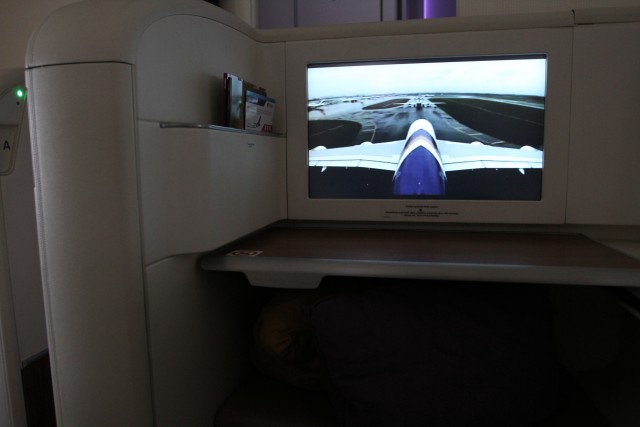 A bird’s-eye view of the A380 taxiing to the runway at Tokyo NRT – Photo: David Delagarza | AirlineReporter

The first class cabin slowly filled to about half of its 12-person capacity and we were soon taxiing. Â I really enjoyed watching the taxi and takeoff from on the tail camera on the screen in front of me. Â I wish more planes came with this option. 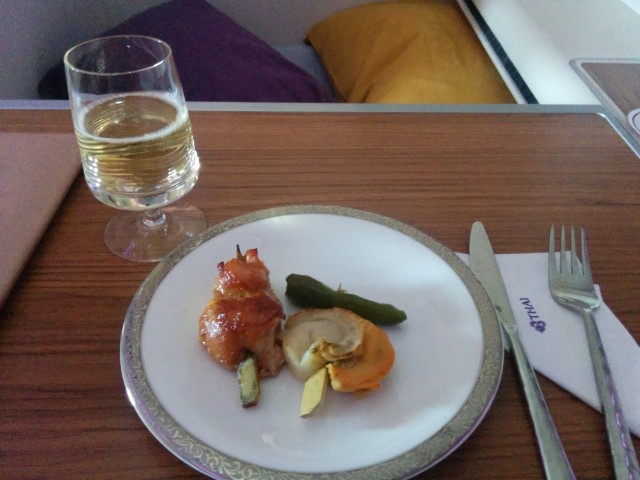 Shortly after takeoff, the meal service began. The appetizer course was skewers of yakitori and scallops, which were both delicious. 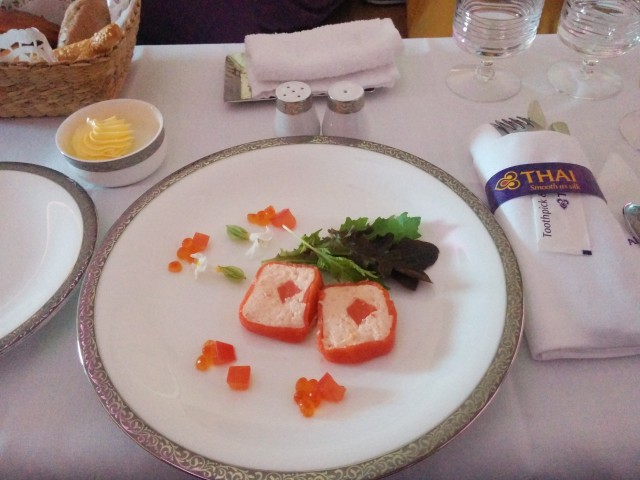 The next course was a salmon terrine with roe and a selection of breads.

After a soup course, it was time for the main course. The flight menu had three options from which to order (a pork fillet, chicken massaman curry, orÂ fried monk fish) however I had pre-ordered my food from an extensive menu before the flight. I had chosen the Lobster Thermidor based on some positive reviews I had read. 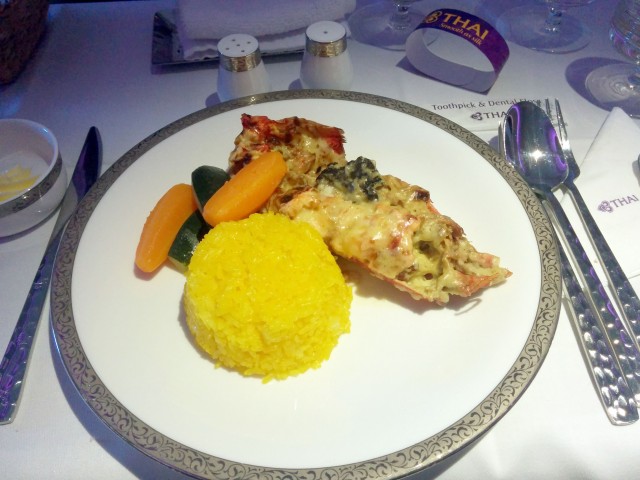 Although appearance of the dish was a bit on the pre-packaged side, and certainly could have been better presented, it was delicious. The lobster was perfectly cooked and seasoned. My wife had pre-ordered the prawn panang curry dish, which I stole a few bites of; it was also very good.

After the meal, I adjusted the seat into a relaxed position and settled down with a very nice Pinot Noir to watchÂ a film. Â I have to say – even though the filmÂ (Get Hard) was far from my favorite -Â watching it in that amazingly comfortable seat, on thatÂ huge screen, with the noise-cancelling headphones, was extremely immersive and I quickly forgot where I was. 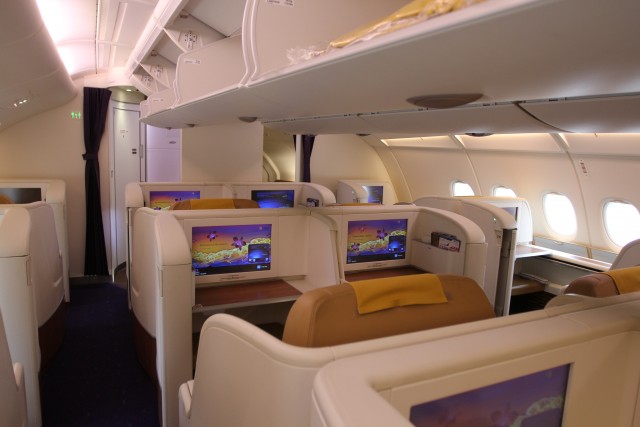 After the film,Â getting some rest sounded like a good idea (I had been traveling for nearly 24 hours at this point), so I maneuvered the seat into the fully-flat position and a flight attendant quickly offered to make the bed for me while I changed. Â Unfortunately, Thai does not offer pajamas on this relatively-short daytime flight; however, I was fortunate enough to haveÂ some fresh ones left over from the earlierÂ ANA flight.

Although the bedÂ was spaciousÂ and very comfortable, I’ve found it is difficult to sleep in first class, as it is such a unique (to me) experience. Â I must have gotten some sleep though, because it seemed like a very short time before the cabin lights came back on and the announcement was made that we were descending into Bangkok.

The landing in Bangkok was a smooth one and we were quickly at the gate. Â This was one of very few timesÂ in my life that I found myself wishing aÂ flight had been much longer. 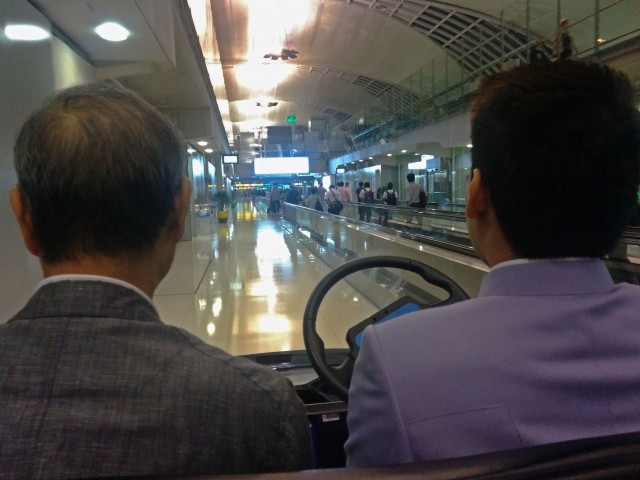 We took our time exiting the plane and were surprised to be met on the jetbridge by a representative who took our bags and ushered us onto a waiting golf cart.

He drove us the (surprisingly long) distance to immigration control, where another airline representative met us and escorted us to a special lane with no waiting. Â Clearing immigration only took a fewÂ minutes and the airline employee met us on the other side, collecting our bags from the conveyor. The time from wen we had arrived at the gate until we were in a taxi on the way to our hotel had been less than fifteen minutes – that’s gotta be a personal record for an international arrival. 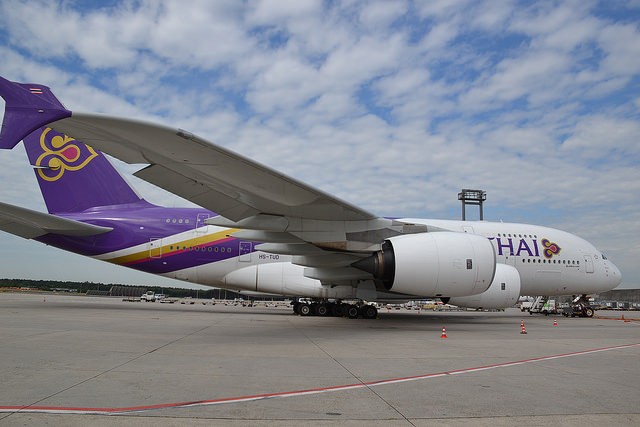 All things considered, I really enjoyed the flight. Â The on-board service was extremely attentive, however not quite as personalized as I had experienced on ANA. For example, when serving drinks, on ANA the drinks were individually poured for each passenger; on Thai, the drinks were all brought out together. Â Meals were similarly served.

As a flight on the short end of the long-haulÂ spectrum, I think we missed out on some of the service and amenities that often go along with flying first class on the A380 (such as pajamas)Â along with being offered a more limited food menu. Â I would really like to experience the service on a longer flight.

Having used United miles to book the flight, was it worth it to fly in first? Â It’s hard to say. Â United really has imposed a steep penalty for booking premium cabins on Star Alliance partners. Â A first class ticket, from the US to Bangkok, rings in at a hefty 130,000 miles – a 50,000-point premium compared toÂ flying on United’s own Global First product. Â For this trip, I thinkÂ it was a good use of points, albeit definitely a splurge.

Next time we fly, it will be with toddler in tow, and it will be back to the “back of the bus” for us.

ASSOCIATE EDITOR - DENVER, CO. David is a civil engineer by training and trade, but his head is in the clouds. A licensed private pilot and skydiver, he grew up around airplanes and airports. He calls Colorado home, but travel is in his blood. You can find him sitting in coach with his wife and toddler on the way to their next great adventure. Email me at [email protected]

https://www.airlinereporter.com/author/davedlg/
Win a Model of Singapore Airlines’ Special 50th Anniversary Livery on an Airbus A380
Riding on the Upper Deck of an EVA Air Boeing 747 – In Economy Class
10 Comments

Very enjoyable story. 15 minutes to get through customs is a dream of mine. I think the fastest I’ve experienced was going to Canada, and that was about 30 minutes in line after an almost 15 minute walk to the customs area.

Thank you for the review and great pictures. Do you plan on doing a writeup on your ANA first class experience? I would be very interested in your views on it.

Robert – that is in the works! Stay Tuned!

It is well written, compelling articles like this that keep me coming back to airlinereporter. Love it!

Thanks Joe, glad you enjoyed it!

Thanks for the review, Can I ask- I have also booked through United points and want to know how you can pre-book your meal? I have tried doing this on the Thai website but it does not recognise my booking ref.
Thanks

Hi Russell, Thai has a separate booking code. You can often find it on the United website by viewing the reservation and clicking “see other booking codes” (or something like that) near the top of the reservation page.
Failing that, you should be able to call United or Thai and retrieve it.
You will also want this code to select your seats online.

Obviously A380 is a much better experience compared to 474.
I took it recently, https://meanie.me/reviews/thai-airways-royal-first-class-review-bangkok-milan
and was a bit disappointed in their old Thai cabin

Hey great post. I hope it’s alright that I shared it on my Facebook, if not, no issues
just let me know and I’ll delete it. Regardless keep up the good work.

Thanks David. I am doing IAH – Tokyo – Bangkok on the exact same flights you write about here. Great knowing what to expect up front.