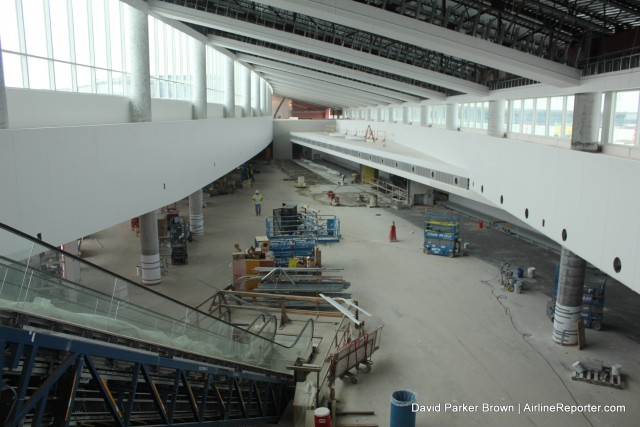 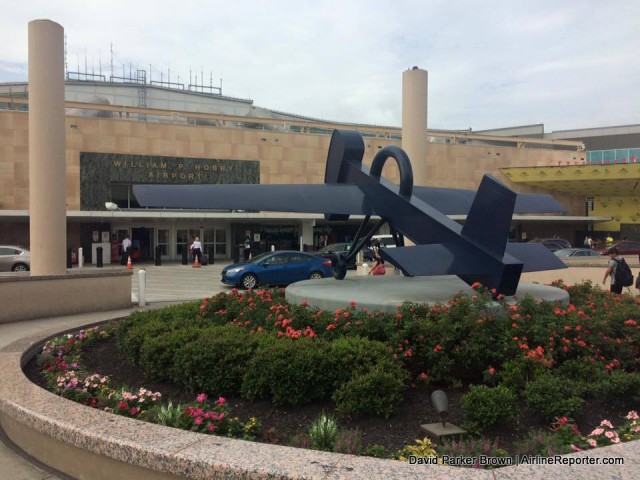 Currently Southwest has about 85-90% of the flights at HOU, with more than 150 departures per day. The airline has been instrumental with a new expansion at Hobby and hopes to increase the number of flights, especially to international destinations.

During a recently trip through Houston, I was invited to take a behind the scenes look at the construction of a the international concourse at the airport. 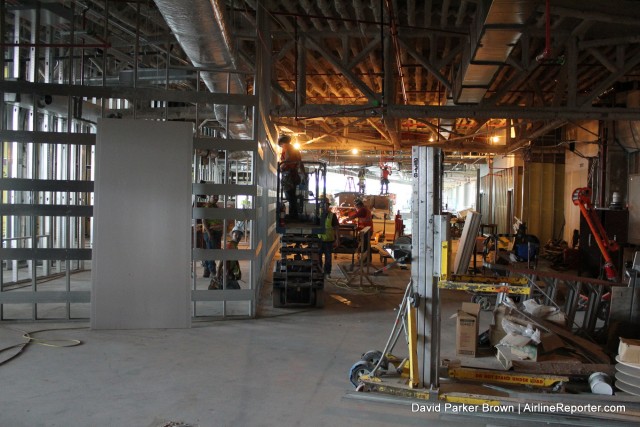 Action going down to bring the new addition to life

I have been able to tour behind-the-scenes of a few airports, but never one under construction. It was great to see what it takes to create a welcoming and efficient environment for travelers. You know the tour is going to be a good one when you are required to wear a hardhat and neon vest — I was ready! 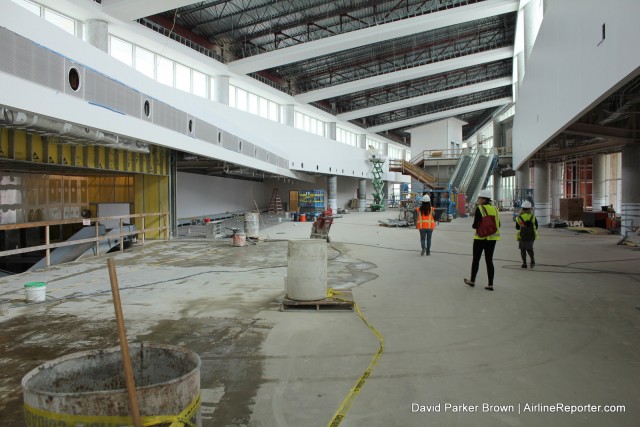 After our introductions we headed back to the construction area and where the new Southwest ticket counters will be located. It was a very open space, which looks pretty white right now (this was common with the tour), but will later be filled with art that will be mostly sourced from local artists. 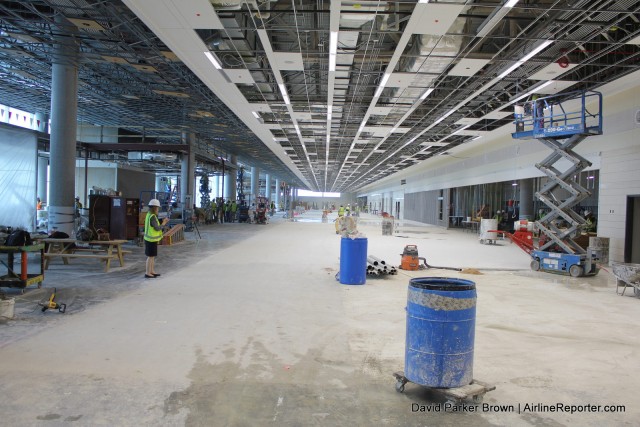 This is the new international terminal under construction

Next, we headed down the new terminal walkway and watched as workers were in action preparing the facility for passengers. The initial expansion phase will have a total of five gates; four will be for Southwest exclusively and one will be for other airlines. Each of the gates is convertible to handle domestic or international flights. 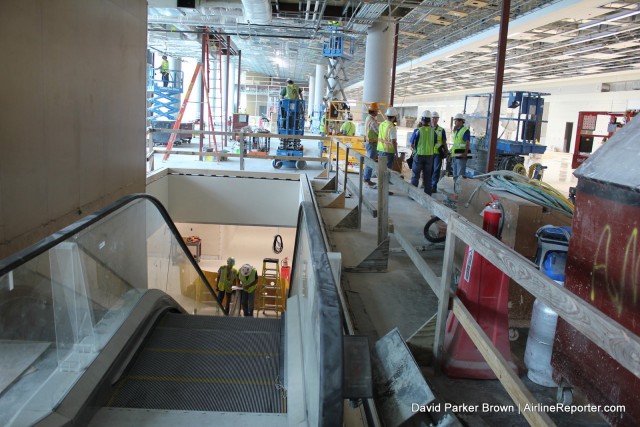 This is one of the new gates. International arrivals will head down stairs to customs.

For a domestic flight, there will be glass doors that are open on the same level that passengers de-plane. However, if the flight is international, those doors will be closed and passengers will be guided downstairs to customs. 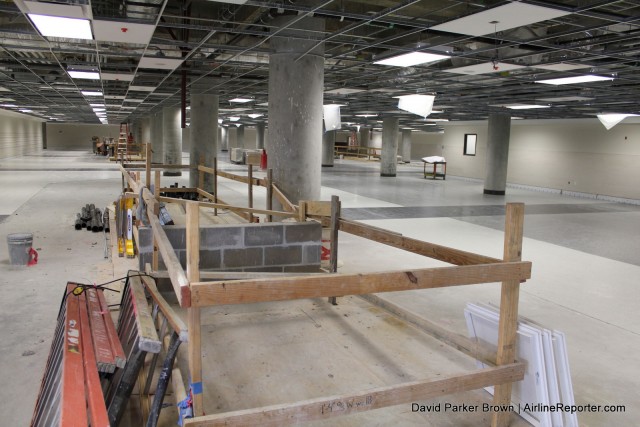 When touring the customs area on the lower level, our guide mentioned a holding area for passengers that misbehave and how there were luggage belts being installed in an underground tunnel. When asked if we would like to tour these things… I easily replied with a, “yes please!” 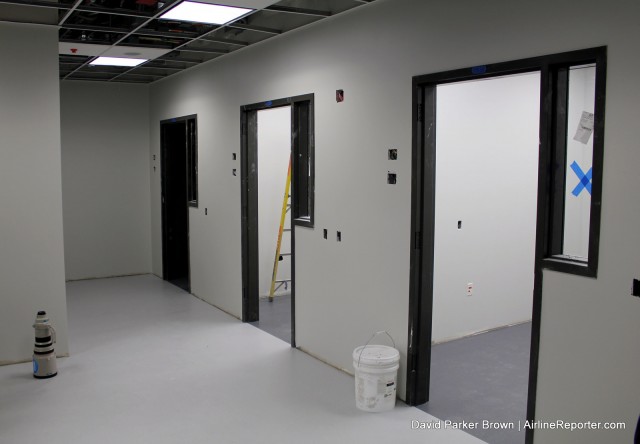 A few of the five jail cells

First, we headed to the holding area, which had five different “jail cells.” The walls surrounding the area are bullet proof, which at the time of our visit didn’t do much good, since the doors were not yet installed. It was interesting to take a look, but hopefully I won’t be back once the new terminal is complete. 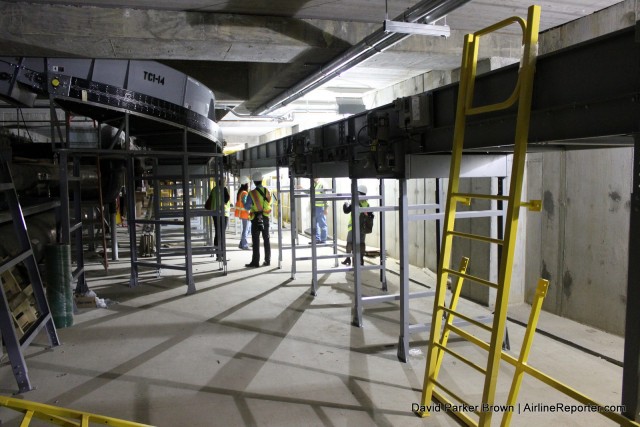 Into the underbelly with luggage conveyor belts

Next, we headed down to the next level to see how the conveyor belts were being installed and how the airport would transport bags back and forth. After hiking through the underworld for a bit, we made our way back up to the main level, turned in our gear, and joined the rest of civilization.

Before leaving we had a nice BBQ lunch at the airport and then headed on back to IAH. 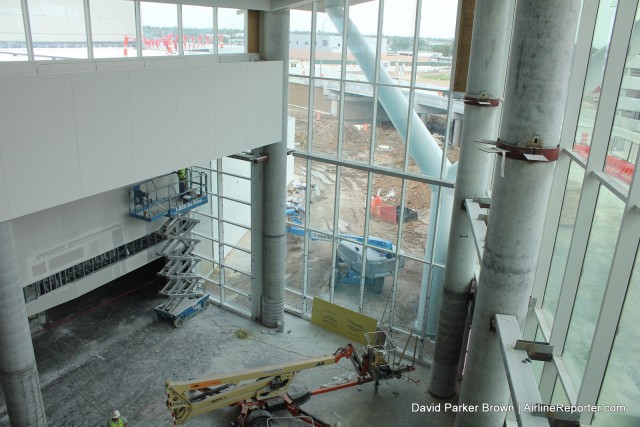 This expansion and remodel of Hobby will increase the options that passengers have in the greater Houston area. The new terminal was even planned so that an additional seven gates could be added relatively easy, if so desired in the future. 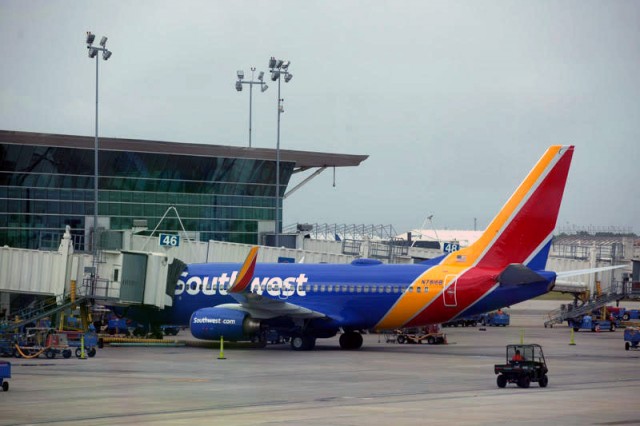 Not surprisingly, Southwest feels pretty positive about their growth. “It’s a very exciting time for Southwest as we expand not only beyond borders but at the places we’ve called home for decades,” Dan Landson with Southwest explained to AirlineReporter. “Houston is vitally important to the Southwest network for a variety of reasons and now our customers will have even more reason to celebrate. ”

Want more? Sure ya do! Check out some more Hobby photos on our Flickr account and also view their live webcam to see their progress.

Thanks Andy! Sorry we missed that.

“Each of the gates are convertable…” One error is a typo; two errors are sloppiness. Should be “is” and “convertible.”

You are correct — sorry about that — fixed!

Not sure of the relevance of the Wright Amendment, as it applied to DAL and had absolutely nothing to do with HOU.

Thank JG — you are correct. Think I got a little too excited about it going away.