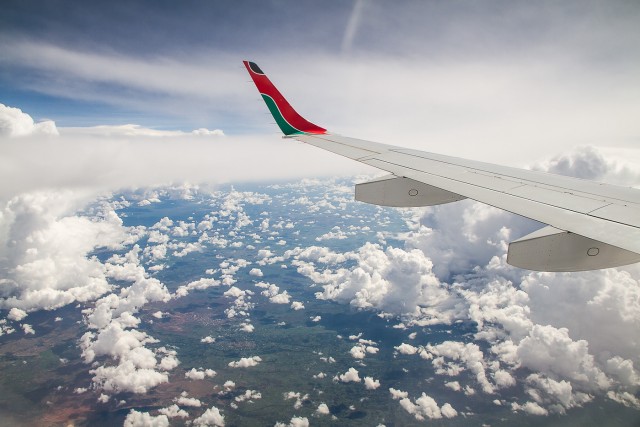 As part of a recent trip to Africa, I had to take a commercial flight from Dar Es Salaam (Tanzania) to Nairobi (Kenya). There are essentially two options for this route; either the direct flight with Kenya Airways or via Zanzibar with Precision Air. Normally, I would take the more adventurous option, but as my trip was time-critical, I chose the direct Kenya Airways flight. 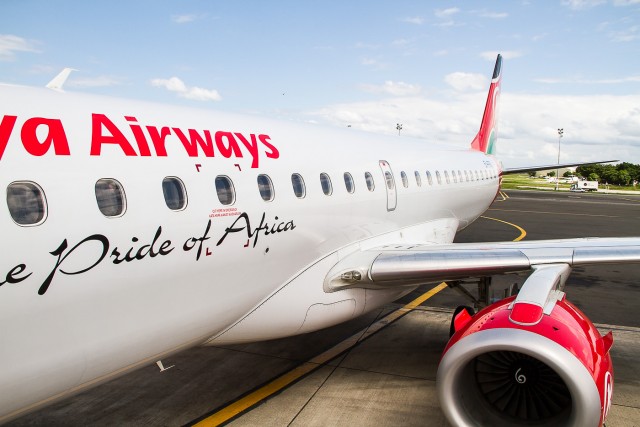 Boarding was on-time and, as expected in true African fashion, was chaotic with no priority boarding enforced. Upon boarding the Embraer E190, I was surprised to find an actual business class cabin in a 1-2 layout. My second surprise came in the form of individual in-seat IFE at every seat, including economy. Whilst the size of the screen was relatively small, the selection of TV programs and movies was more than sufficient for the 90-minute flight. 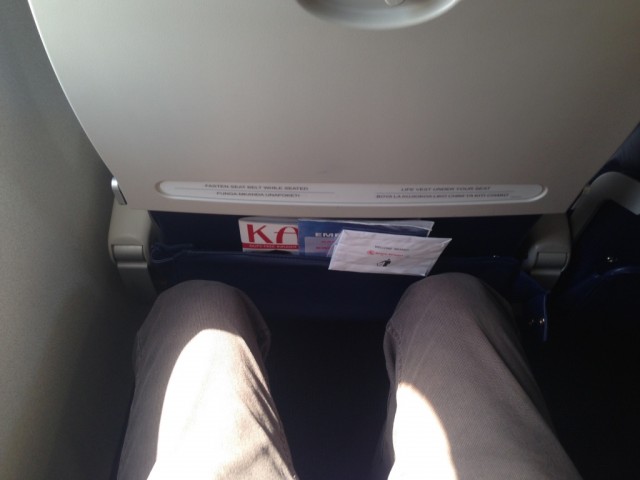 My only criticism is that there were no headphones provided (the jack, however, is compatible with standard single-plug headphones), nor was there any airshow map on the IFE, something I always enjoy viewing on shorter flights where there is no time to see a full movie. A USB power port was a welcomed feature. 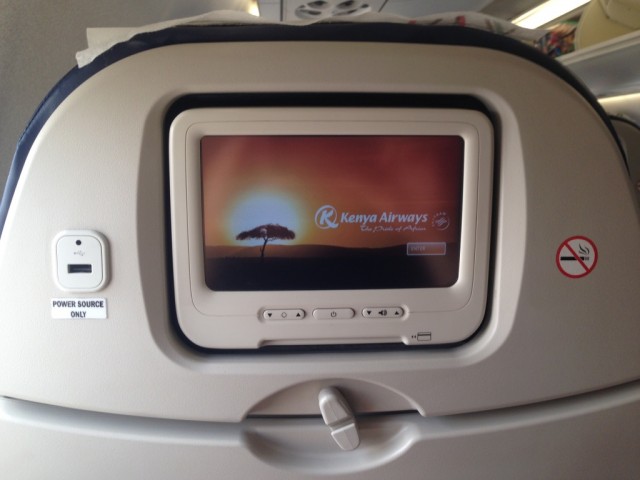 In terms of in-flight service, I was not expecting much on this short flight given my prior experiences with flights of similar length in Europe. Once again, I was pleasantly surprised when the crew distributed a warm chicken panini sandwich.

In addition to the standard beverages, there was a wide selection of premium brand spirits available which were complimentary, even in economy class. Duty free was also offered; it was interesting to see that nearly every passenger was buying something. I had never seen so many duty free sales on a flight before. 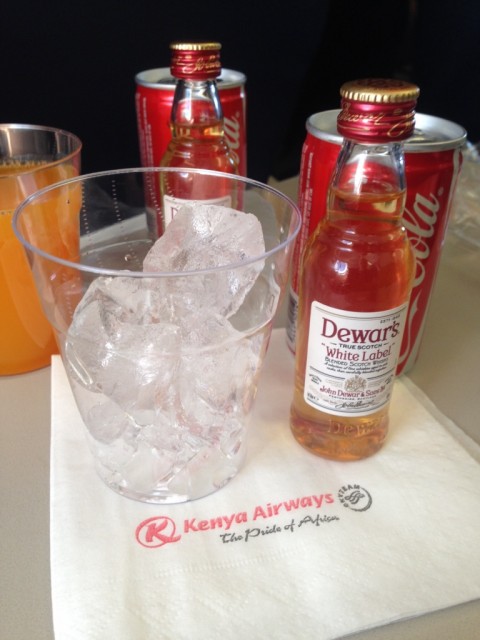 Complimentary on this short flight, even in economy – Photo: Jacob Pfleger | AirlineReporter

The arrival experience in Nairobi is probably the weakest point of the Kenya Airways experience. Upon disembarkation from the aircraft, a 15-minute bus ride ensued.

Eventually the bus came to a building resembling a carpark. This carpark is actually the international arrivals hall. According to staff, this is only a temporary measure until the main arrival hall gets rebuilt following a fire in 2014. It took no less than 20 minutes to process all passengers on our (regional jet) flight.

I would hate to imagine what this hall looks like with the arrival of multiple long-haul flights at a time.  Baggage delivery also took a further 20 minutes, so it was almost an hour from the time the aircraft arrived until I was outside the arrival hall. 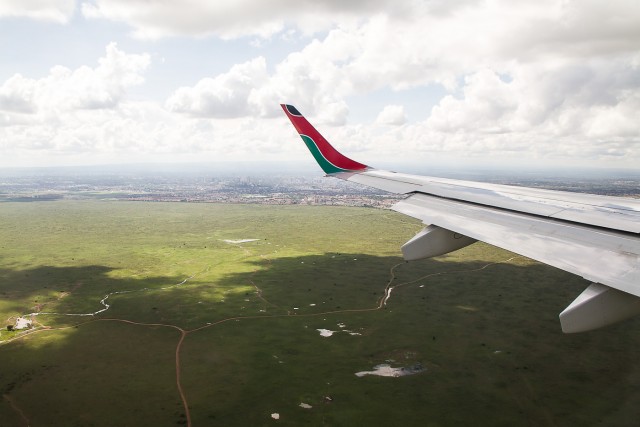 Final approach into Nairobi, over the national park; can you spot the Giraffes? Photo: Jacob Pfleger | AirlineReporter

Having never flown on an African airline, I was not quite sure what to expect. I was pleasantly surprised by the service offering on board Kenya Airways, despite the lengthy arrival procedure in Nairobi.

Kenya Airways gives many European “full-service” airlines a run for their money, in particular with their cabin product. Furthermore, given their extensive network of fifth-freedom flights within Africa, they are a solid and reliable option for intra-African travel which can look intimidating and dysfunctional at times.

https://www.airlinereporter.com
Flying with Kids — When They Aren’t Your Kids
Memorial Day: Flying a Fallen Hero
7 Comments

As some of my family friends live in Africa, i fly to Uganda and Tanzania alot . Though Kenya Airways is impressive, the real “pride” for me is Ethiopian Airlines. It has one of the best air connectivity in Africa, and even gives Middle Eastern Carriers a run for its money on India- South America flights. It really is one of my favorites out there. 🙂

Kenya Airways is surely the “Pride of Africa” I always fly Kenya Airways, because they have some of the Airline connections in Africa, plus the always friendly nature of Kenyans, and a chance to practice my simple Swahili with their staff.

I would say Kenya Airways, and Ethiopian are some of the best African run Airlines in Africa, the well financed middle eastern carriers are however creeping into their routes, thus affecting their profits.

For me Kenya Airways wins because I don’t have to worry about political bs when I land in Nairobi, or be scared of being hauled to some police camp if I ask a wrong question, or discuss politics like in Ethiopia. I feel freer when travelling though Nairobi.

I took Kenya Airways while I was travelling within Africa, from Tanzania to the Seychelles. The flight from DAR to Nairobi was far better than the one from Nairobi to Seychelles. The one from DAR to Nairobi was on the EMB jet and had in-flight TV, comfortable seats, and was a good product for the short flight time. From Nairobi to Seychelles – which was a 3-hour flight – we flew on an older Boeing 737 which had no in-flight TV and had uncomfortable seats with narrow seat pitch. The flight attendants were good on the both trips though.

We did not fly Kenya Airways long-haul, as we took Ethiopian from the US to Africa. Travelling on Ethiopian was nice and comfortable with good IFE, comfortable seats, amenity kits, and good customer service. I had a better experience on Ethiopian as they provided a better product versus Qatar or Etihad.

Full details on each of my flight experiences can be found on my blog at: http://0504traveller.blogspot.com/

I used Kenya Airways recently with my mum who was not very mobile we made sure we booked wheel chair assistance. We had to travel from London to Zimbabwe with a stop all went well until we got to Zimbabwe. We got off the plane and waited for the wheel chair to arrive but were told we just had to get on the bus and there will be a wheel chair waiting for us at the terminal. We got off the bus and still no wheel chair so I left my mum standing while I attempted to get assistance and as I turned my mum fell over and injured her ligaments on leg. What a traumatic experience we ended up going to A.E after such a the long flight and obvious extra expense. All of which could have been avoided we had to change the day we were due to fly back because of the injury. I spoke to the manager in the Harare office and her reply was we had to lodge the complaint via an email. I have found their customer service to be appalling. I requested they reimburse me for the extra expense of the change of flight after almost a month with 2 token goodwill offers it hasn’t been resolved I”ve been offered a voucher of $250 my extra cost were $528 not including the hospital charges and the inconvenience occurred on what should have been a happy occasion. To add insult to injury they suggested I should have paid for a more expensive ticket that would allow me to change the travel dates without a charge. If they had provided the services offered all this could have been avoided.. Please take my advice you don’t want to be treated like you are not a valued customer.. Don’t fly with Kenya Airways they certainly didn’t live up to the their slogan “Pride Of Africa” ..No way

At least some people are happy with KQ, but not me, but 7 years ago I had clients who ‘lost luggage’, on a flight from the USA, KLM to Europe, then KQ to Nairobi. Value was some $1400, including the $250 that I paid, excess baggage, for their additional bag. Items consisted of 7 life jackets for rafting, plus climbing rope and binas. All new. Two years down the line, couple of wasted trips to the JKIA, quite a few increasingly p’d off emails, the only response I’d gotten worth anything was an email from some snotty nosed secretary telling me not to be ‘Rude’ and t was being dealt with. I gave up,, and to date I have received no further correspondence, let alone compensation. SO – 4 years ago I started requesting ALL my clients NOT to be using KQ for any flights, if possible. To date, as I advise KQ by email each New Year, I reckon on having diswaided about 125 visitors to Kenya, from both the USA and Europe, from flying with them. In monitary terms this probably amounts to over $1/4 million in PURE lost profits – sorry KQ are isuch dire straits today.

Do you know any line with private jet flying to Morocco?