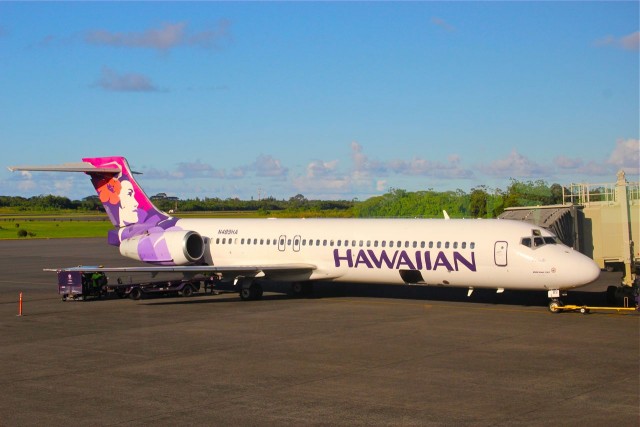 The new seats, designed and produced by Acro Aircraft, features a “tablet table” machined from solid aluminum, which will be a part of a new color scheme.

The airline states that the new colors, “connects travelers with the elements of the islands through earth tones, a deep aqua seat, and accents of fuchsia and sky blue. Contrast stitching in the upholstery brings out natural forms of the islands.”

The seats do not appear to be the most comfortable in the world – that is okay though, since most of the flights will only be 20 to 60 minutes.Â Hawaiian Airlines operates 160 inter-island flights per day, so durability and quick turn-around time will be important.

Wow, those seats look, Scary ! so, just a plain piece of Thin metal with a piece of cardboard with some fabric stretched over it , if that’s doesn’t look like the most uncomfortable seat ever seen !!
Short hops or not, still awful !!

If you’ve ever been on an inter-island flight, then it’s not really that big a deal. The flight from Lihue to Honolulu is about 20 min. There is no cruise, the plane climbs and descends. The flight attendants barely have enough time to give everyone a juice wait for it to be consumed and collect the trash before touchdown. I’ve ridden on hard, uncomfortable bus seats for longer. I would only be concerned if the airline has designs on putting these into their trans-pacific flights to squeeze in more seats. On flights longer than an hour, then yes these would definitely be uncomfortable.

They have stated those seats & designs are for interisland only. Hawaiian know what they are doing, they know their market very well.

Good to know. Thanks for the confirmation on usage.

Boy, how many cycles those aircraft must be doing! I know Qantas loves them because they are so easy to maintain and so reliable.

These are also the New Frontier Seats!! SCARY!!!!!

I’ve flown on the refurbished Boeing 717. Frankly I don’t like the seats. They are hard and not very comfortable. The table is tiny. The seats don’t recline. There was nothing wrong with the seats that originally came with the 717s. They were far more comfortable. Hawaiian Airlines should not be treating their inter-island passenger customers like bus riders or cattle.