The ’œMiracle on the Hudson’ is a prime example of why birds and aircraft do not mix.  But what do airports do to ensure that our journeys, from one airport to the next, are safe? I recently took a tour of Seattle-Tacoma International Airport (SEA) and saw what their wildlife management team was doing to keep both airplanes and birds safe.

SEA has been a leader in wildlife management since the 1970s, when they were the first airport to hire a dedicated wildlife biologist onto their staff.  At the moment, Steve Osmek runs the wildlife program at the airport and has done so for a number of years.  Previously coming from the USDA and NOAA, he gets to combine his love of animals and an interest in aviation into on job.  It was Steve who took me around the airport and introduced me to a number of ways that the airport is helping to mitigate bird strikes. 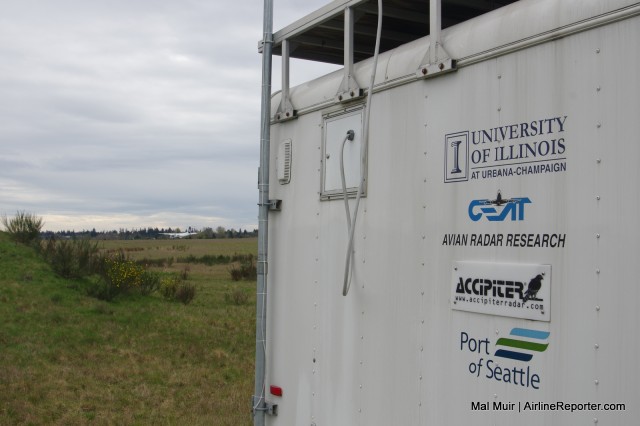 The Port of Seattle, along with the University of Illinois, have installed an Accipiter Avian Radar at Seattle Tacoma International Airport, the first of its kind in the US

SEA was the first commercial airport in the US to install and operate an avian radar. What the heck is that you ask?  An avian radar is essentially a system that can detect birds around the airport — but it can do much more.

The system is a modified and digitized marine radar, that when fed through the system can track birds and other items (as small as a cotton ball) from between 50ft and 500ft away. The airport, along with the University of Illinois, have had the system in place since 2007 and have completed extensive research to ensure that it works.

Over the years, procedures and systems have been refined and there have been numerous lessons on how to manage the radar. 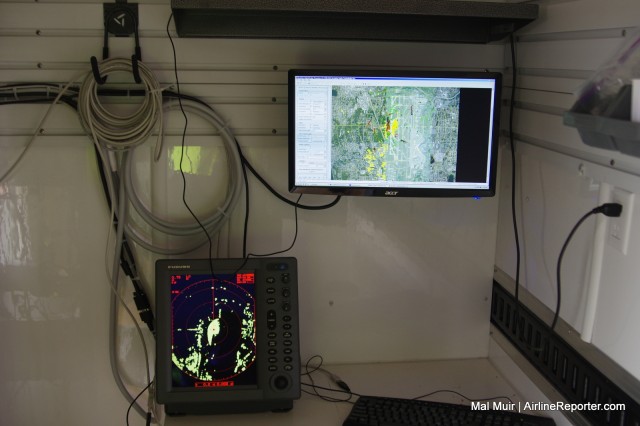 Bottom left is the raw data from the Avian Radar which is then processed to what you see on the screen on the upper right.  This is designed to spot birds from 50-500ft in the air.

Even with a high-end system, strikes will still happen. In fact, earlier this month, a Red-tailed Hawk struck an aircraft on departure. The radar system is designed to help to lessen that risk.  But, like any situation, there are numerous ways to handle the data collected.

While the wildlife staff at SEA have access to the raw data available directly from the radar, the Airport Control Center (ACC) has access to some of the data as well.  In the ACC is a display that helps to track flocks of birds that maybe loitering around the airport.

If a flock (three or above) of seagulls or larger birds are detected in the vicinity of the airport by the radar, it begins to track.  If that same group of birds is detected more than two-to-three times, over a rolling 15-minute period, an alert sounds (the tone is actually the sound a Canada Goose makes).

When this alert sounds, a display in the ACC helps the staff identify where the birds are and they can dispatch an Airport Operations staff member to investigate. 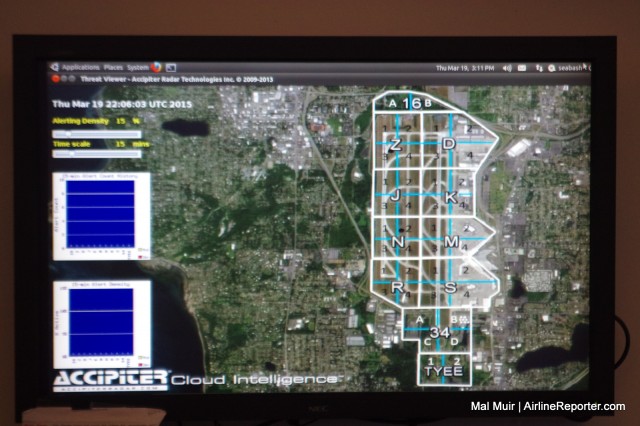 It may sound silly to only send someone out after three minutes, but it ensures that they are after the birds that are loitering in the area, not just flying through.

Although a single hawk could be a danger, the probability is low.  A flock of seagulls (who are not the smartest) sitting around one of the runways is a bigger problem.

When the Airport Operations staff are dispatched to the site, they then communicate with the wildlife staff as to what happened.  That could range from not being able to see anything, through observing but not deeming a hazard, or having to take action to scare away the birds. 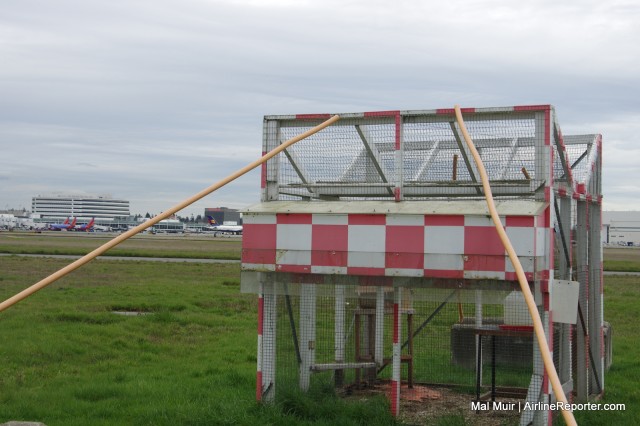 To scare birds away at SEA, they use a mixture of pyrotechnic pistols and shotguns.  They don’t do harm to the birds — just scare them away. But scaring the birds is not the only way to deal with them.

Trapping the birds that hang out on  airport property allows them to be safely relocated.  SEA does this in a number of ways, using different kinds of traps — depending on the type of birds.  The traps I saw during my tour were of two different kinds.

The first trap is for European Starlings (it was not active at the time), which attracts birds to enter, but they cannot get out.  Any Starlings trapped are then euthanized (they are a non-native species) before being donated to the Burke Museum, located at the University of Washington. 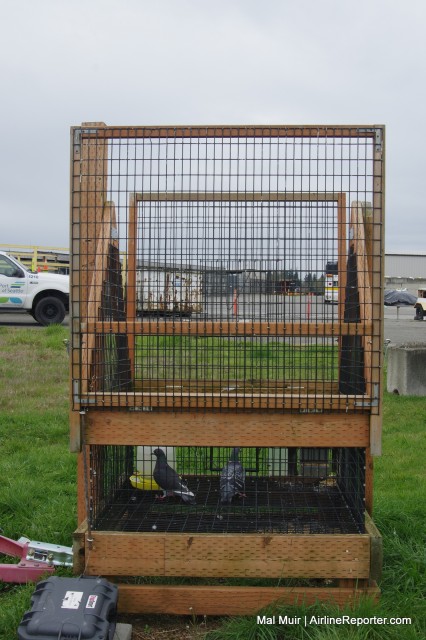 Larger birds of prey, like the Red-tail Hawks, are caught using a design called a Swedish Goshawk trap.  These traps use live pigeons as bait, but don’t worry, they are humanely treated and are in a part of the trap that the other birds can’t get to.

A larger bird would fly over the airport and see the pigeons dancing around inside the trap. It would likely become enticed and swoop down at the birds below.  What the attacking bird does not realize is that as it gets closer to the pigeons and begins its swoop down to snatch them up, it will knock out a piece of wood, and the spring-loaded trap closes — bird captured! 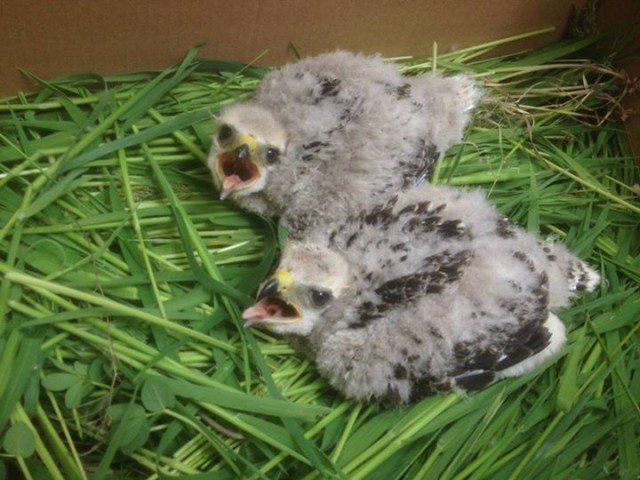 Baby Red-tailed Hawks are safely relocated up north by the airport – Photo: SEA

Once the trap activates, a monitoring system will send a signal back to the wildlife staff, who then will dispatch someone.  The younger birds are put into transportation containers and taken to a contractor in Burlington who will rehabilitate the bird, and then let them fly away of their own accord.

The resident birds, the ones that will stay in the area, have all been captured and tagged.  You will know it is a resident bird by the yellow tag on the wing (left wing for males, right for females) and these birds are allowed to stay around. 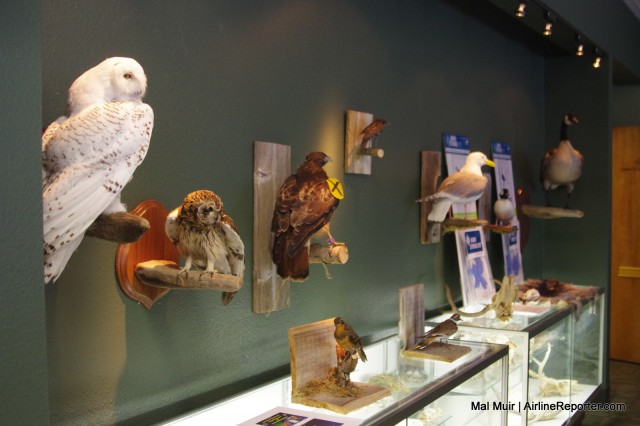 The resident hawks tend to think of the airport as their territory. Although they may occasionally be trapped or get scared off, they end up keeping other birds away, so they are worth keeping around.

Birds outside are not the only ones that need to be addressed at an airport.  Sometimes birds can get trapped inside the airport and cause disturbances in operations, and obviously not a lot of fun for the bird. 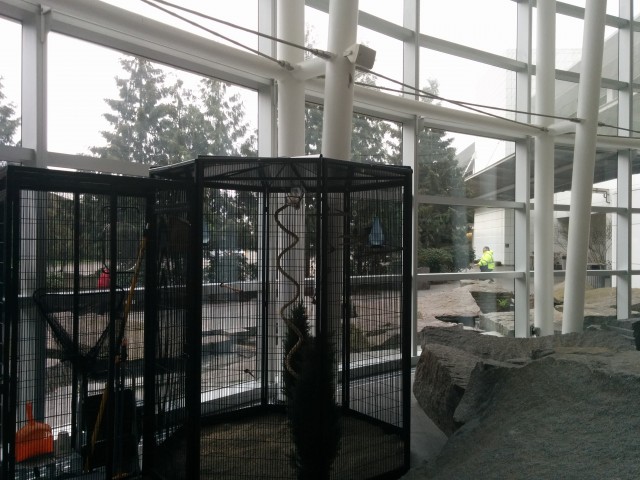 Inside SEA’s large arrivals hall, with its high open area, is a small aviary tucked off in the corner.  This aviary may seem like a bird cage, but it is really a trap. Inside live a couple of resident Sparrows (who could escape if they wanted to, but life with food and people gawking at you all the time is pretty good apparently) and they are used as live bait.

Sparrows are a species of bird that like to be social and congregate, so where you find one or two sparrows you may find more.  Those that come seeking companionship — are trapped. 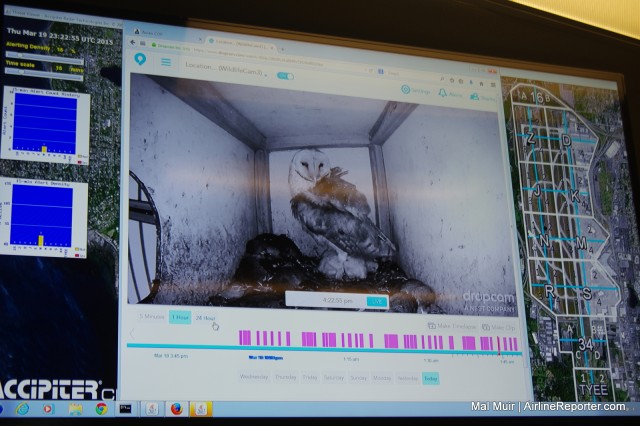 A barn owl is spotted hiding in the owl box in the equipment shed at SEA. The white mass around her feet are babies!

On the day of my tour, the camera had only been re-installed the day before (after being offline for a while), and it was paying off.  There was an owl, and her newly-born chicks, taking up residence. When an owl enters the box, it is generally relocated, except when there are eggs, they normally wait until they hatch. 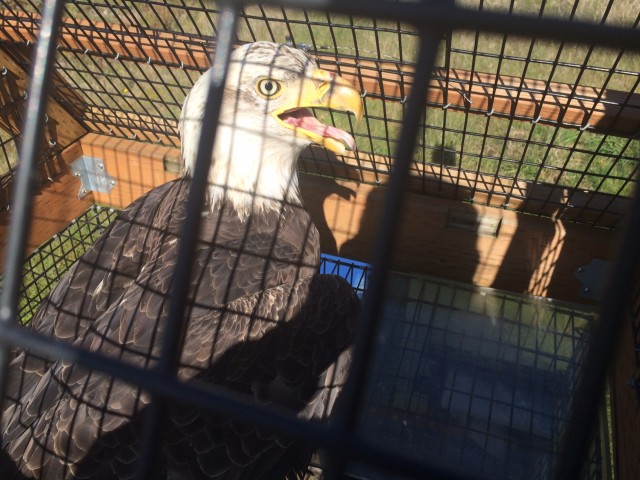 A Bald Eagle is captured at the airport – Photo: SEA

Although birds take up quite a bit of the energy with the wildlife management folks, there are other animals (with four legs and no wings) that can also cause problems. Historically, coyotes and deer have been an issue.  But when the airport added the third runway, they also upgraded their fence to be a deterrent to these indigenous mammals.

A 12ft-high fence,that also extends into the ground at a 45 degree angle, is used to ensure that they can’t climb over or dig their way into the airport.  A coyote being hit by a plane could be far more dangerous than a bird — it has happened in the past.  The fence has been a success, since no aircraft has hit any mammals in many years. 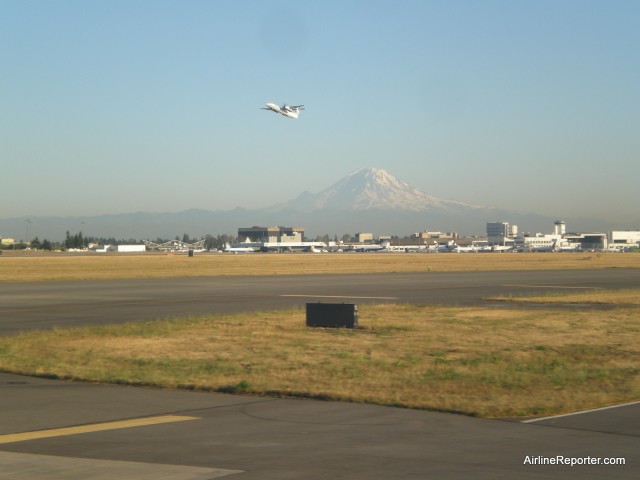 Making sure that planes take off and land safety is an important duty – Photo: David Parker Brown

With all of these different ways to manage animals at the airport, it may seem like SEA has it all under control. However, they want to stay the leader of the pack when it comes to wildlife.

In the future, the airport wants to upgrade its Avian Radar by taking on better, more-powerful technology that could be of benefit to not just the airport staff, but also Air Traffic Control.  By introducing a link-up with an ADS-B receiver (similar to what is used on sites like Flightradar24) they can filter out the aircraft on the ground and the air and make the avian radar better.

So next time you are taking off and notice animals nearby, know there are quite a few people and some great technology keeping you safe.

https://www.airlinereporter.com
“Living in the Age of Airplanes” Is a Visually-Stunning Aviation Film for All Ages
“France is in the Air” Inaugural Flight to Vancouver
1 Comment