I recently had the opportunity to attend a pre-release screening of National Geographic’s new IMAX film, ’œLiving in the Age of Airplanes.’ I first saw the trailer last fall and was immediately excited to see it. Being the aviation geek that I am, I held high expectations, and I’m happy to be able to say they were met.

The project was produced and directed by Brian J. Terwilliger, who is also known for the aviation film “One Six Right.” The runtime of the show was 47 minutes, and the producers maximized every minute with absolutely stunning cinematography, paired with majestic music tracks by Oscar-winning composer James Horner and narration by Harrison Ford. The show opened in the famous ’œAirplane Graveyard’ in Mojave, California, with sad, parted-out 747s as Ford spoke about how air travel is now taken for granted. 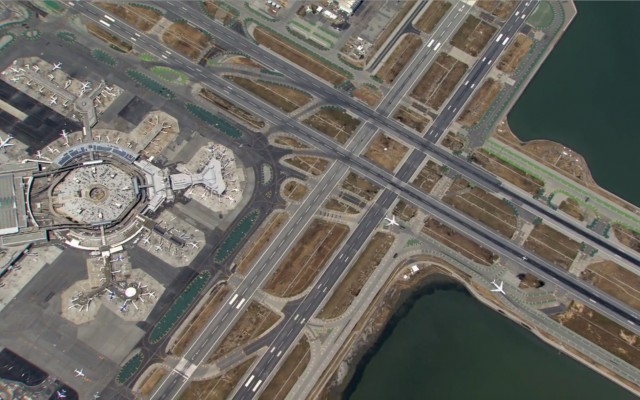 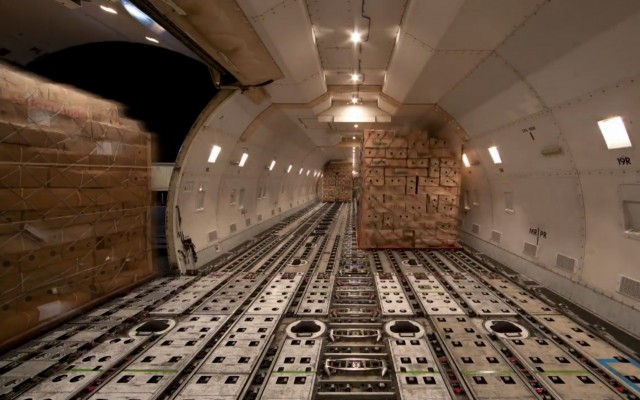 Another focus of the film is the importance of the global air cargo network. To demonstrate this, we see a bouquet of long-stemmed roses make its way from the grower in Kenya, to the wholesale market in Amsterdam, to a vase in Alaska in just over seventeen hours. We also see how our homes are a melting pot for produce, garments, and housewares from all over the globe.

In the final scene, we’re given a look at our own perspective as travelers. When we fly, we often sit there without realizing we’re going anywhere, Ford says. But taking a look out the window, from 35,000 feet; we see more of our Earth in one glance than most of our ancestors saw in their whole life. This window seat perspective is what I love most about aviation. 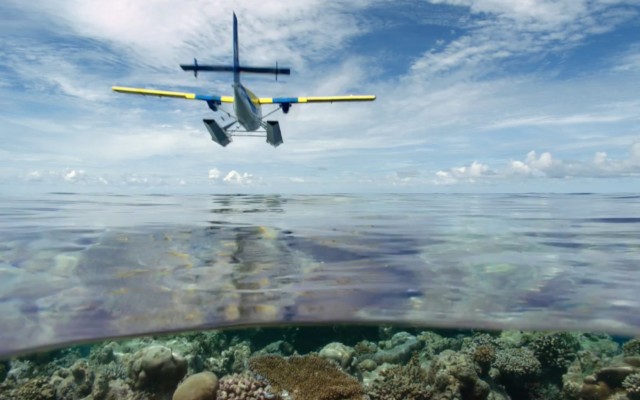 The cinematography alone makes this film worth seeing. A few scenes that come to mind: a United Boeing 777 traversing the taxiways at SFO as the camera ascents straight up to give a view of the whole Bay Area. A montage of Airbus A380s on takeoff. Seaplanes landing on azure waters in the Maldives.

If I could improve anything about the film, it would be two things. First, I wish it were longer. Those 47 minutes really flew by, no pun intended. However, the movie’s reps on Twitter said the run time is right in the ’œsweet spot’ for IMAX films. I would also have liked to see some content on the manufacturing process. So many advances have been made in the past couple of decades, including composite fuselages, glass cockpits, and eco-friendly fuels.

Perhaps a follow-up film will cover how planes are built and tested. I’ve been fortunate to tour the assembly lines where some commercial aircraft are built, and it never ceases to amaze me the amount of knowledge and effort that goes into building planes.

Everyone should see this film. It is appropriate for all audiences, from interested kids to the jaded million-mile flyers. It is my love and fascination of planes, put into images – and it’s incredible.

All photos are screenshots taken from the video, cited to National Geographic.

I'm a writer & photographer, specializing in aviation and travel. I have over thirteen years of experience in the airline industry, in the areas of customer service, cargo, ground operations and passenger experience. I love getting on a plane as often as possible, along with enjoying a new craft beer whenever I can find one.

Looks amazing. Can I see it anywhere here in the UK any time soon?

Paul, I too have wanted to see this since I first learned of it. Sadly our lobbying efforts here in KC failed and the closest showing is hundreds of miles away. Your endorsement means a lot and only intensifies my desire to make the trek. I’ll be looking for the opportunity to visit an IMAX on upcoming travels. Great piece! JL | AirlineReporter

Really surprised neither the Museum of Flight nor Pacific Science Center here in Seattle isn’t on that list, yet it will be at completely random places like “World Golf Hall of Fame” and two places in New York. Doesn’t make sense.

After it completes it tour, do you think it may be released on the National Geographic Channel?

Since no showings are planned for Russia and the DVD may be a year or two away, I guess I’ll have to wait for someone to share it on a torrent stream. )))

I saw this at the Pacific Science Center yesterday in Seattle, along with my 9 year old son. I was blown-away by the cinematography and the music. I have to admit that I was a bit emotional at the end. It was the best IMAX documentary film I have ever seen. The next time that I travel on an airplane, I will take a few moments to reflect on just how lucky I am to be living in this age of airplanes and human history. I recommend this film for all ages. Watch it. You will enjoy it! 🙂