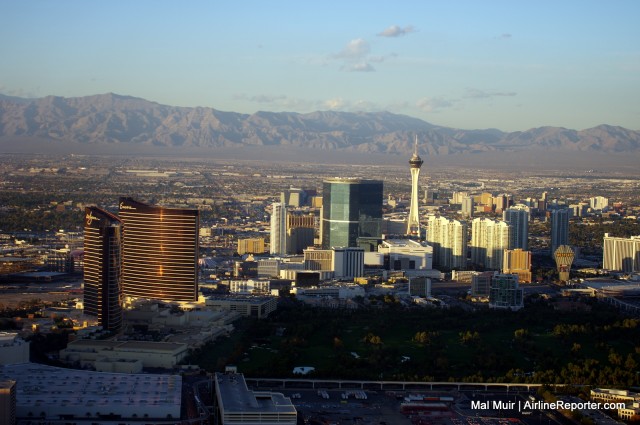 A great way to get a different perspective of a placeÂ is to take a flight over it. Â Heading to somewhere you havenâ€™t been before, well why wouldnâ€™t you take a flightseeing trip to get that different perspective? Â As part of my honeymoon with my wife HeidiÂ after our AvGeek wedding, we wanted to have a few new experiences each on this trip. Â One of the things that I like to do is take a helicopter ride over cities. 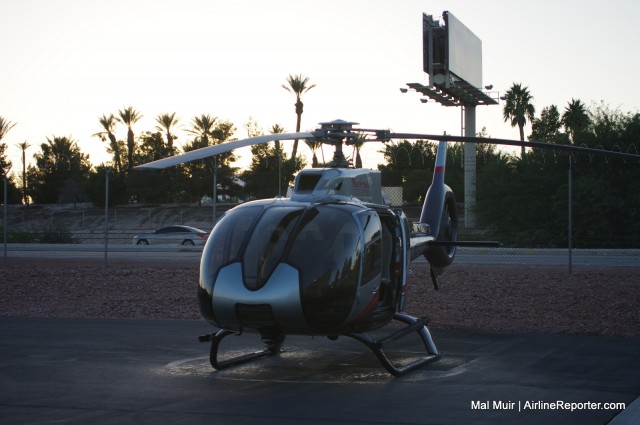 When we decided to visit Las Vegas, I really wanted Heidi to get that experience of seeing the city by hovering aboveÂ (since this was her first trip to the city). Â This would also be not only her first visit to Vegas, but also her first helicopter flight. Â How could she marry an AvGeek and never have flown in a helicopter before? It was time to change that. 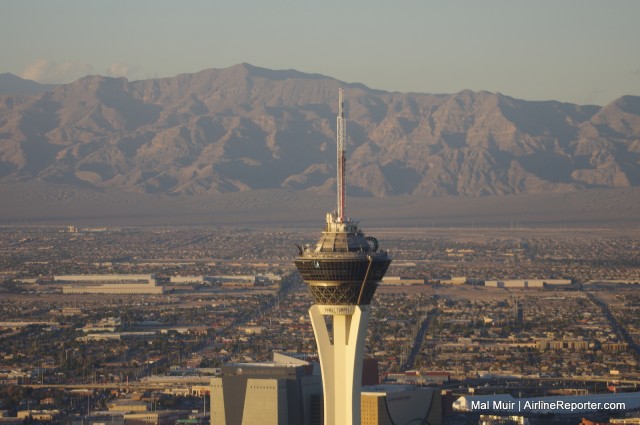 Getting up and level with the Stratosphere in Las Vegas

The folks at Maverick Helicopters helped us out by taking us on a scenic helicopter flight over the Las Vegas Strip. Â It was a unique experience and I was as excited as Heidi was, but for me it was mainly because there was the chance I could get to do some spotting from inside the helicopter (like Bernie does quite a lot).

Maverick has the largest fleet of Ecostar helicopters in the USA, which means you have a very good chance of getting one of these spectacular helicopters for your flight. Â I have flown in Ecostars (a Eurocopter EC130) and they provide a superior flight experience. Â Quiet on the inside thanks to good sound suppression and the fact that the helicopter has a fenestron tail.

What is a fenestron? If you take a look at the back of most helicopters you will see the tail rotor. Â The tail rotor is there to keep the helicopter from spinning wildly out of control by counteracting the torque created by the main rotor.

When Eurocopter (now Airbus Helicopters) developed the fenestron it created what is now a brand trademark, being found on most of their helicopters. Â The fenestron is a shroud around the tail rotor and by keeping it ducted, you reduce noise but also danger to those on the ground. Â So since the Ecostar has this on the tail of the helicopter it cuts down the noise considerably and means that you can have a more pleasant experience. Â Plus the fact that the Ecostar has a large nose, that is almost all glass, means that you get a better visual experience as well. Â Pretty much ideal for a flightseeing trip. 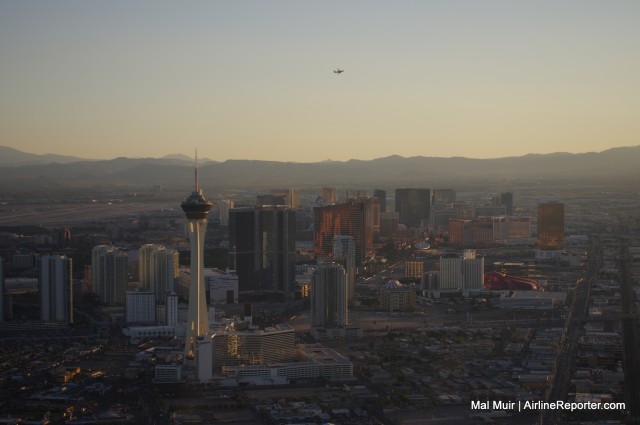 Flying over the strip, heading towards the south gives you amazing view of McCarran Airport as jets take off

The flightseeing trip over the Las Vegas strip may only be a 10-12 minute flight, but you get a chance to really see just how big the strip is, and how expansive the resorts and casinos are.

The flights can also happen at night, with a great view of the neon that the city is famous for. Â However, we took our flight at sunset, a sight that I much prefer. Â That way you can get some beautiful pictures of the city and the surrounding areas as the sun sets in the background. Â But the real reason we flew this was for Heidiâ€™s first helicopter experience. Â You donâ€™t want to read about my thoughts, you want to see hers, in her own words:Â 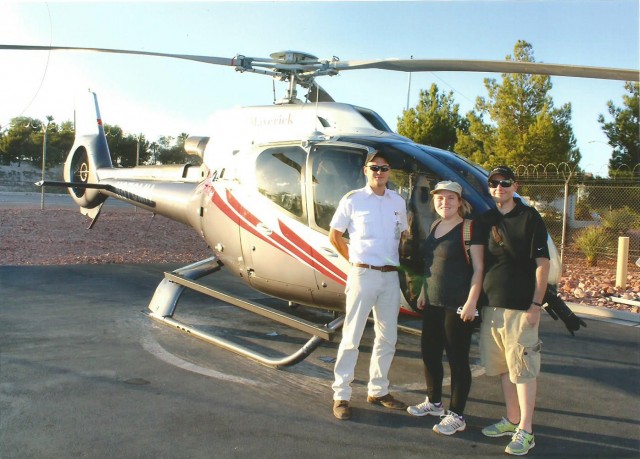 Heidi, myself & our pilot Tone prior to boarding our flight – Photo: Maverick Helicopters

“I was not sure what to expect as I had never been on a helicopter before and I was interested in comparing it to my experiences in other small aircraft,” Heidi explained.”The flight was smoother than I expected and I was very comfortable. Â The movement felt very similar to a small aircraft, although when we took a hard bank to the left over the strip, I could feel the rotor vibration that I was expecting. Â Overall it was a very thrilling ride and a great way to see the strip. Â I like how being up in the air puts everything in context. I enjoyed flying during the day so that I could take photos. Â Flying in a helicopter was thrilling, comfortable, and offers a unique perspective. Â It is also a more intimate experience, sharing a flight with a handful of people rather than with a tour bus of 45 or more.” 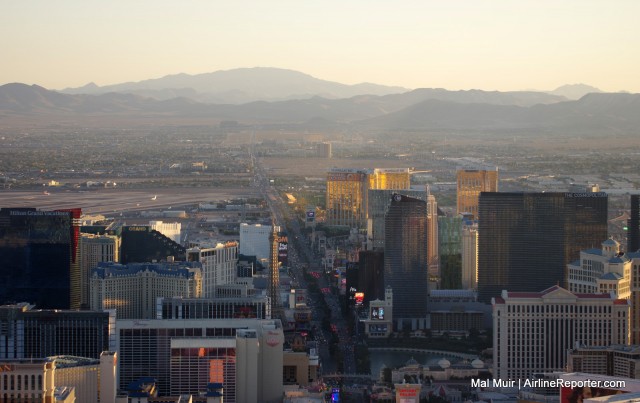 The helicopter ride was provided for both of us by Maverick Helicopters, although all opinions are our own.

https://www.airlinereporter.com
The TSA Preâœ“â„¢ Dilemma, and Why it’s Not For Me
Flying 15,000 Miles to Spend One Night in Brazil for a Media Trip – PART 2
4 Comments

Yip in December 2013 over Christams I spent a whole 9 days in Vegas for FREE ! I won enough money to pay for my Airfare and hotel and eats and then some.

The Nuclear Testing (Atomic Bomb Museum) Labatory was neat to go thru, as was the MOB Museum up on the Far North end.

The it was off to Binons Casino to see the free Elvis Museum.

I won at the Flamingo and at the Golden Nugget Casino.

Didn’t have much Luck at the newer over hyped Casino’s tho !!!

Vegas ain’t as nice as it was back in the 1960’s & 1970’s when we used to go there quite often, too many kids in baby strollers and that kinda stuff.

Also I noticed a lotta of the Neat NEON Signage is slowly disappearing – replaced with Cheaper Backlit signs and those dreadful LED Lighting signs, without the Neaon Glow, Vegas just ain’t Vegas like it used to be !!

Looks-alive a u had an awesome trip to Las Vegas. The most advantage of helicopter is that you can see the top view of beautiful Las Vegas.

I did this with a buddy this past June at night, the views were spectacular, & the pictures turned out to be some of my favorites. Well worth the price to do this.

The bad part is the impact of dozens of daily flights directly over homes. I live on the edge of town with no airport near. The flights rattle the windows in my house and the glasses inside the kitchen cupboard. There is apparently no constraint on the number of fly-overs, so as the economy has improved, it’s been like living right next to a highway. Helicopter noise has become an issue in various cities nation-wide and is just getting worse. Lately, the town of East Hampton NY passed laws to limit the traffic, but of course the law suits are just beginning. The helicopter folks are nice enough, but they aren’t interested in anything but making money.