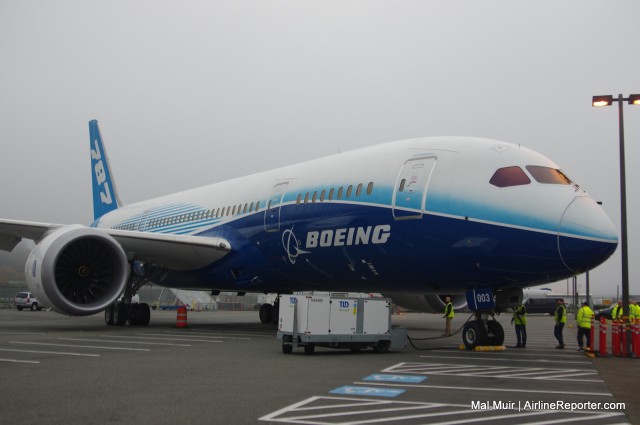 Saturday, November 8th at the Museum of flight will forever be known as Dreamliner Day.  This Seattle aviation museum is known for many examples of aircraft built in the Seattle area, such as the first 747, the prototype 737, and the only remaining Boeing 80A.  But now the Museum has it’s own Boeing 787 Dreamliner, the first museum in the world to have such an aircraft.

When Boeing rolled out this particular 787, ZA003, it was destined for the test program.  Once it had finished its time in the program, it was fitted with a full passenger cabin.  This aircraft was also one that caused some original controversy on this blog due to the paint scheme.  It was repainted from the Boeing Test livery (that is still being used on ZA004 to this day) to the ’œDreamliner’ livery, the same one used on the first 787.  This was in preparation for the most famous piece of ZA003’s history, the Dream Tour.

ZA003 at the Doha International Airport for the Dreamliner World Tour – Photo: Boeing

ZA003 spent a good six months touring the world, visiting far away countries, touting the aircraft’s game-changing features, but also allowing the airlines to get their first glimpses of the aircraft they had purchased.  The livery it wore for this Dream Tour is what ZA003 still wears, down to the tail logos of the airlines who purchased the aircraft at the time, all 56 of them.  But ZA003 sat in storage in Moses Lake, WA, for quite some time, awaiting what could have been a sad, sad future – turned into scrap metal (well, mostly scrap carbon fiber).  Then the aircraft was rescued – the final flight from Moses Lake back to Boeing Field would be the last-ever flight of this aircraft, as it flew to its new home just down the street from Boeing’s Flight Test Center. 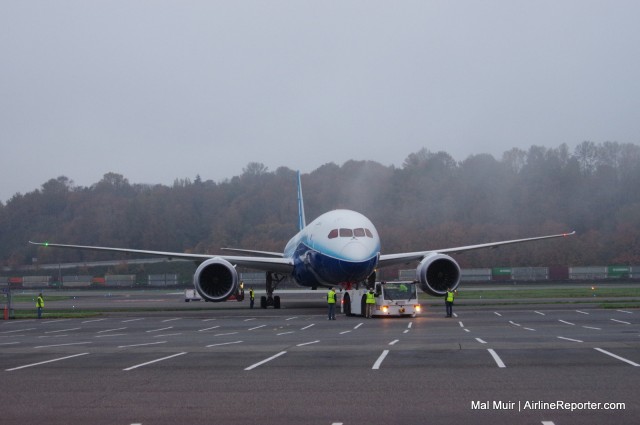 ZA003 being towed into the Museum of Flight parking lot

Before 7:00 am on Saturday morning, ZA003 was towed down the taxiway at Boeing Field to the parking lot of the Museum of Flight.  It was a foggy morning, and as the aircraft rolled in it was eeirly quiet, as though everyone knew this was an important, yet solemn occasion.  ZA003 is the first of three aircraft being donated by Boeing to museums around the world (no other details unfortunately given, but I wouldn’t mind betting ZA001 will be heading to the Smithsonian Udvar Hazy Center at Dulles Airport).  Currently, ZA001 and ZA002 are in storage at Palmdale, CA. 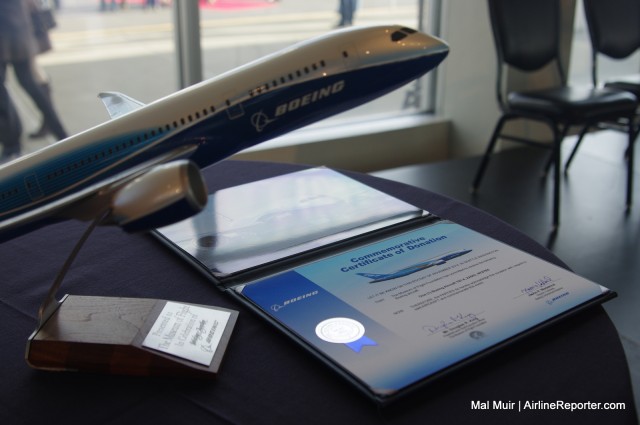 It wouldn’t be a delivery ceremony without a model and a certificate, right? Although this time the museum gets it for free

The aircraft was handed over by Boeing in a large ceremony attended by crowds of onlookers.  Pieces of 787 memorabilia were brought off the aircraft by pivotal Boeing 787 program members and handed over to docents, staff, and volunteers of the museum, ready to be added to the collection.  Senior Curator of the Museum of Flight, Dan Hagedorn, said that ZA003 is a curator’s dream.  ’œAn artifact is a man-made article of great historical significance,’ he continued,  ’œthat (aircraft) outside is one of the finest examples of an artifact.’ 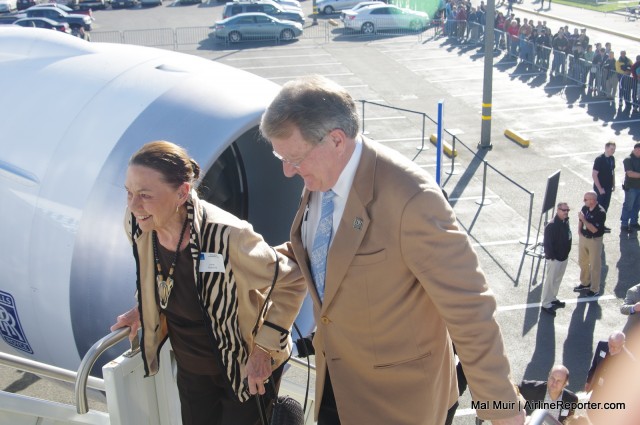 June Boeing, wife of William E Boeing Jr, is the first person onboard ZA003 as it opens to the public

The aircraft was opened for display, with the first person onboard being June Boeing, wife to the son of aviation pioneer William Boeing.  As the public explored the aircraft, they could check out the business class cabin and a small economy cabin as well.  This was also the first aircraft to have a full passenger fit out onboard, including the signature 787 grand entryway and LED lighting.  The electrostatic window shades were also in operation so the public could see just how these unique windows functioned.  At the back of the plane was a large open area, one that will be fitted to replicate the test equipment that was in place originally. 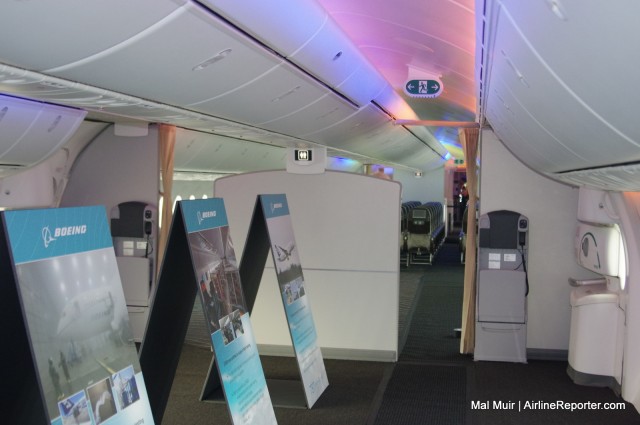 From the back of ZA003 looking forward towards the economy cabin

ZA003 is a unique aircraft, one that flew countless hours, not only as a test aircraft, but as a show piece for Boeing.  This aircraft has now found a fantastic home at the Museum of Flight, and although it is being removed from public display from the 10th to the 21st of November, don’t worry – it will be back.  After the 22nd of November, ZA003 is going to be put on permanent display, ready for generations of people to see just how amazing this game-changing aircraft really is.

“It was repainted from the Boeing Test livery (that is still being used on ZA004 to this day) to the ”Dreamliner” livery, the same one used on the first 787.”

I think the lighter color on ZA003 looks better.

You are right. There was a little livery update from ZA001 to ZA003’s World Tour.

wait, what was the main reason they donated it? Also, why would they scrap a barely used machine? I mean yes, it was the test aircraft but is that normal to just scrap test aircrafts?

They had to do so many modifications to the first few test aircraft that they were not able to sell them to airlines.

Donating ZA003 to the MoF is a great move. Tax write off and giving back to the community.

A fun article, Mal and thanks. It is a shame that ZA003 must be retired, when she is so new. I understand that she is an obese test machine that cannot be reduced enough to fit the commercial weight curve (think FAs in the 602 ans 70s.) Since ZA003 is intended as a static (non-flying) display, will Boeing be able to recover and reuse 1) The spendy and fully functional RR engines and 2) the majority of the also spendy and still functional avionics, in favor of place-holders or dumb faces? Nice to see the hefty donation, but sad to see Boeing give up one of the over-weight girls that did most of the work. Grounding her for ever and at such a young age is a bit sad. We’ve heard that other extremely early builds (ZA004++) have had weight issues in commercial service, they have apparently been resolved with the owners. It is a shame that ZA-1-2-3 cannot find some suitable application, in some fleet. Just idle thoughts about a seriously obese lady who remains so attractive. I still have to wonder about embedded value of components already installed on ZA-01-2-3? The engines and other “Flying Kit” are not chump change.

Cook, the Rolls Royce Trent 1000 engines that are now on ZA003 are developmental engines that are no longer serviceable due to the testing they endured. The majority of the high dollar components, avionics included, were for flight test purposes only, and would have been changed out if the plane was delivered. The main reason why this plane is now in a museum is part of the deal that Boeing made with the State of Washington and the government over tax breaks and such. Boeing is not allowed to realize profits of any kind from the sale of the first three planes. As such, they were at first destined to be used as structural testbeds for composites, and eventually scrapped. However, Boeing decided to donate at least this airframe prior to that happening. It was a win win for them. Now, I would have preferred to see ZA001 at the Museum of Flight instead of 003, but I will take what I can get.

@Kris Hull. Wow! thanks for the update and some ‘local and inside’ info. All makes perfect sense, especially you comment about those very expensive engines. Parking ZA003 for eternity may be a little sad, but the very expensive girl has performed her job well. If one lumps the development costs of the 787 into the three overweight test airframes, they are probably the most expensive airplanes ever built. And ZA003 has a comfortable home!
If it matters, I’ve had the good fortune to ride four 787s; two short runs by intention and two very long legs mostly by coincidence, and at both ends. I’m here to tell you that while the 787 may be a pilot’s joy, it is also the most passenger-friendly airplane of my experience. New and very clean sure helps, but the 787’s various arrangements and facilities just work. Those engineers and designers really were paying attention. While not really in the same class, I’ve also traveled on the A380. Big, funny-looking and whatever, the Bowing 787 is a far superior airplane, at least from this PAX’s view. I think the pilots agree. Thanks again for the detailed poop about ZA003 and her sisters. Mixed feelings about the tax breaks etc., but keeping Boeing’s presence viable in WA is a BIG deal. I’ve never worked for them, but my Father did (briefly, in the early 50s) and several relatives enjoyed long, productive careers with the company. The 787 is proof that Boeing ‘Gets It,’ and will thrive in the long term. Beyond the 787, 777-X and the 737-MAX lines, one has to wonder what Boeing’s Dream Team has up it’s skirts. They are not likely to miss the boat or be out-designed by our European friends. “If its not a Boeing, I’m not going,” is the joke that many enjoy. In most cases it is fact and a great idea. They build very fine airplanes! -C.

It is just too bad that the first 787s weren’t able to be sold. I mean I agree Boeing did many things right, but having to trash/donate a few 787s means things didn’t go to plan.

I would love to visit that museum, one day I hope I will 🙂

The 002 I believe, was donated to the Pima Air and space Museum !!! There are video of it being moved across the street from Davis Monahan AFB on you tube !!!!

why is that 787 sitting at Boeing field it was there for several months. than left ,, for a couple of weeks now it is back again, is that the Japanese gift plane ??…. I know it runs I have seen I move