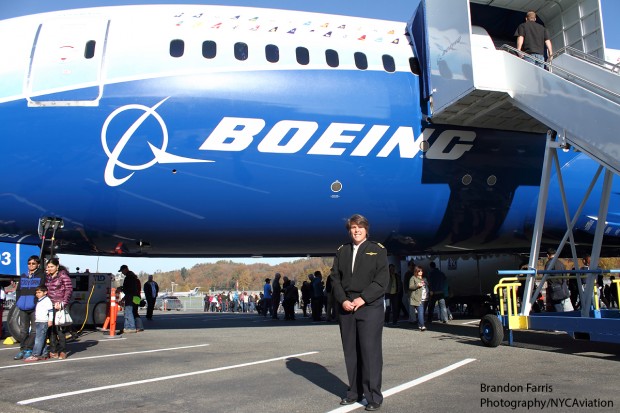 (Editor’s note: During the festivities surrounding the recent 787 test model handover at the Museum of Flight in Seattle, NYCAviation was granted an exclusive interview with Heather Ross who is one of the head 787 test flight pilots.)

HR: Oh gosh, that’s a tough one. There is a real tendency under the wing of this airplane (ZA003) to say this airplane. It’s a great airplane; it really is. I love this plane but I love the 737 too, so it’s really a tough choice.

NYCA: How does the Dreamliner compare to other Boeing aircraft, and what’s it like to fly the dream?

HR: It’s named appropriately, for one; the aircraft really is a dream to fly. It’s very easy and makes all of us pilots look good. The flight controls do a wonderful job of basically rejecting turbulence and upset so the ride is very, very smooth. Since we’re standing under the Dreamliner, it’s obvious we’ve flown this airplane all over the world; in fact, a couple times around. I can tell you even on 16- and 17-hour flights I don’t feel as fatigued as I would on any other airplane. The cabin pressure is much lower, and the humidity is much higher so you don’t feel dried out. It’s just a real comfortable plane to fly not only as a crew member and pilot but also as a passenger.

Continue reading On the Flight Deck with 787 Test Pilot Heather Ross on NYCAviation.com

The cabin pressure is much higher, not lower!

Right, the cabin altitude is much lower and the cabin pressure is much higher.

As I was reading it, I wanted to make the same comment as the two above.

Sorry guys, just typed it the way she said it!

Brandon, it is typical mistake. I saw the same mistake even in official Boeing press release)). Anyway, I really like your Heather Ross interview!

So I’m confused. On a typical aluminum aircraft the fuselage is pressurized to 8000 ft., even though the craft is at 36,000 ft. On the 787, the cabin is pressurized to 6000 ft, which is lower than the 8000 ft. of conventional aircraft. So which is it? Is the cabin pressure lower as Capt. Ross stated or is it higher as stated here?? Humidity can be raised because of the composite material allowing for more moisture in the air. You don’t have to worry about fuselage corrosion with the carbon fiber.