’œThis new livery perfectly matches Spirit Airlines,’ said Ben Baldanza, Spirit’s President and CEO. ’œIt’s radically  different from other airlines, and it’s fun, just like we are. When you see this plane in the air ’“ or on the ground – there will be no question that this is a Spirit plane.’

The look might remind one of a taxi cab — maybe something Spirit wants – Photo: Spirit Airlines

Many passenger have been critical of Spirit and all their fees, but as our JL Johnson recently found out, if you are smart in how you book Spirit, you can have a successful and cheap flight. Since JL is a fan of the airline, I wondered what his thoughts were on the new livery.

“I like it! The new livery will serve the brand well and aligns the paint on the planes with their newly revamped website and overall marketing scheme,” Johnson explained. “Not long ago Spirit launched the new “bare fare” branding in an attempt to educate customers on their unbundled model as well as reduce complaints. When an airline repaints their planes to mirror their marketing it sends a clear message that that they are committed to it. All positives, in my book. Plus, I’m always a fan for throwing away boring Eurowhite liveries in favor of anything else.” 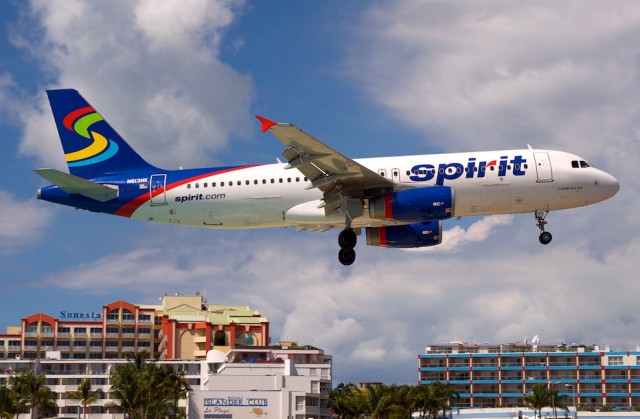 The current Spirit livery will take a while to be replaced with the new yellow one – Photo: Bernie Leighton | AirlineReporter

So what do I think? Man, I feel like I am on a “livery overload” already. My first reaction is, “what, really? That is a taxi-cab livery… who would do that?” Then I remember this is Spirit Airlines. Known for their crazy antics, low fares, and tons of fees — the airline where anything can happen. If Spirit wants to come off as a low-cost carrier that says, “look at me, I want attention,” I think that they hit their mark.

What do you think? If this the right move for Spirit Airlines?

I wish we had a “like” function on our comments 🙂

This ” new ” paint scheme reminds me of those of Northeast 721,722 and D93 ” Yellowbirds ” and Hughes Airwest Banana D93s. They were circa 1970s to 80s. Delta later acquired Northeast. Anyone else old enough to remember them? Yellow is certainly more attractive than BORING white!

I would love to know how this is so different to all the other Airlines its not as if this livery took much thought. I know its better than white but really is this the best they could come up with? Looks like school bus with out the red flashing stop lights.

Now United needs to change theirs, and Delta adds more color the world would be right.

Terrible but functional. Looks cheap but it fits the airline. Southwest is the current winner of the best new airline liveries.

I had to check the date of the story, thought this was an April Fools joke for a second. This is certainly one way to make your brand recognizable.

Honestly, when I first got wind of this, I thought it was a joke. Spirit does do some silly things to get attention.

Hideous. Simply hideous. And the yellow “scratches” in the lettering make it look like a giant used a huge piece of steel wool on the sides of those poor Airbusses.
Here’s an airline that wants to look like a rental car shuttle or taxicab. Here’s an airline I’ll likely never fly.

I love it! I think Spirit’s new brand is really cool and it looks pretty bold on their planes. The white livery is pretty generic, and the silver one just looks dated. The bold yellow is going to really pop, and the scratches are another unique feature.

I actually saw it in person today at FLL. It actually looks similar to the Sprint branding with the yellow with black lettering. I saw the rebranding a few weeks ago at the HQ building in Miramar. I wonder if anyone thought about that when they came up with the colors and the similarity with the spelling with Sprint.

You aren’t alone in making that connection. Taking it a bit further, the livery was designed by a Kansas City Based marketing firm who has also been advising Spirit on their Bare Fare re-brand and related marketing. Until Sprint was bought out by a Japanese firm it too was a KC (suburb) based company. Likely just a coincidence but worthy of note.

It may look like a Taxi but I can tell you that our flights out of KTPA are overbooked or are all most full.

Many passenger are commenting at the ticket counter and gate, how much they love Spirit Airlines for the “Ultra Low Fare” and now understand what they can travel with to get the very lowest cost.

I waiting to see when someone’s going to call it “The Flying Banana”. Or maybe I just did! 🙂

When a banana gets a little ripe it turns to two colors: Yellow & Black.