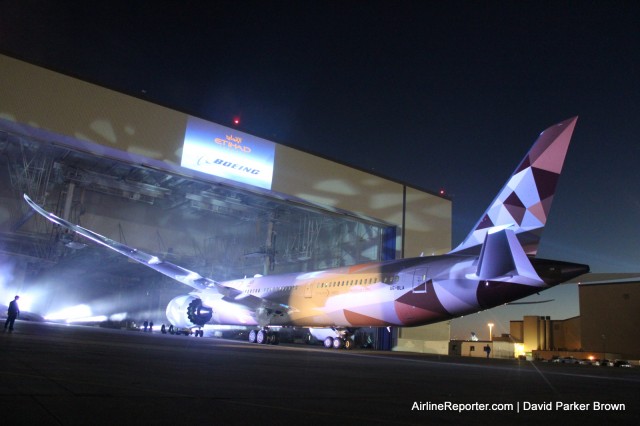 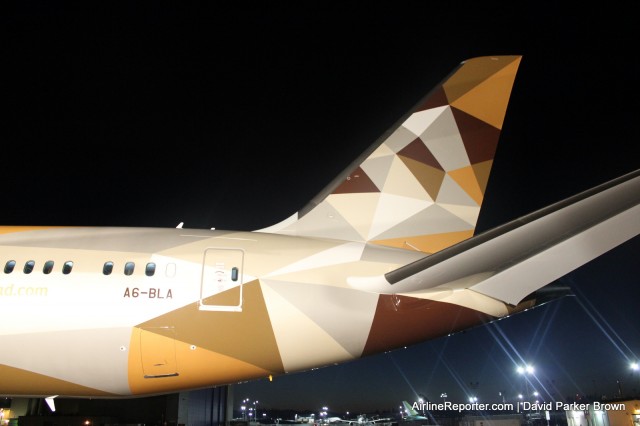 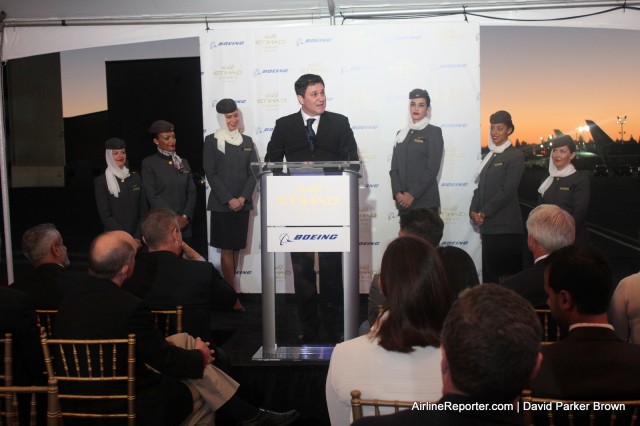 Before the large hangar doors started to open, a few people spoke about the airline, the 787-9, and the importance of the event. There was a perfect backdrop of the sun setting over the Boeing flight line. 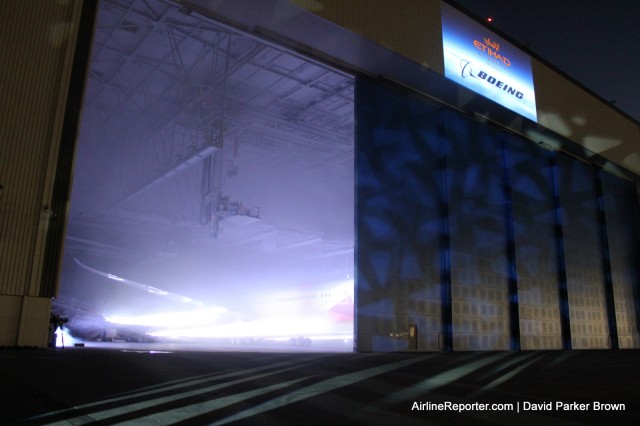 Soon, lights started racing across the paint hangar doors, while loud, upbeat music commenced.  The doors slowly started to open and revealed a fog-filled hangar with Etihad’s new 787-9 waiting to be seen.

BONUS: Here is a video of the Etihad 787-9 reveal, sort of setting the scene 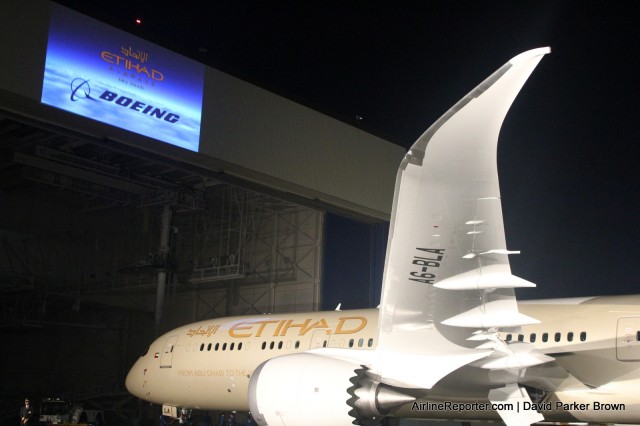 The design was beautiful. It is unfortunate that “BLA” is in the registration number, because this design is anything but “BLAh”

My first impression: Beautiful. And it seems that I was not the only one. As I shared the reveal via our Twitter and Facebook channels, all I heard were positive things about the design — which has never happened before (there are always some people who hate a new livery design).

Etihad states that the new livery matches up to the vision and heritage of Abu Dhabi, “in a globally recognisable way.” They state that, “The ‘Facets of Abu Dhabi’ pattern used in the new design reflects the lights and shapes of the Emirate. The designers used the ambient geometry present in the architecture and culture of Abu Dhabi and reinterpreted it with a sense of Arabian modernism which has become synonymous with Etihad and its home.”

The airline says that the Landor-created design was drawn from the different hues of the UAE landscape, such as “the darker sands of the Liwa desert and those of the Northern Emirates.” The inspiriation didn’t just come from the landscape, but also from the “modern Abu Dhabi and iconic buildings such as the soon to be opened Louvre Museum on Saadiyat Island, which has a beautiful domed roof that will refract geometric patterns of light to its surroundings.”

The main colors found in the livery are gold, dark sand, dark brown, metallic platinum, white, off-white, and grey. There is also a bit of red, green, and black used as well. What is really nice is that  the main fuselage is not white, but a very classy (and sparkling) pearl color that stood out, even in the darkness.

One concern that the airline had with the redesign was what to do with the crest. In the previous livery, the crest was prominently displayed on the tail. Although it was decided to remove it from the tail, it still holds an important placement next to the main titles. 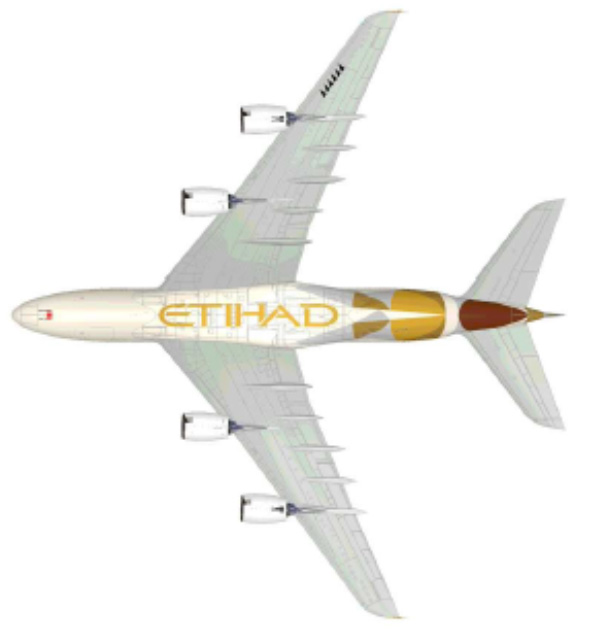 The new Etihad livery will have their name on the bottom, as shown with this A380 mock-up – Image: Etihad Airways

Another addition to the new design will be adding “Etihad” to the bottom of the planes. This is very similar to what Emirates does with their aircraft. For spotters, this is a good thing, since it makes it easier to identify the aircraft. 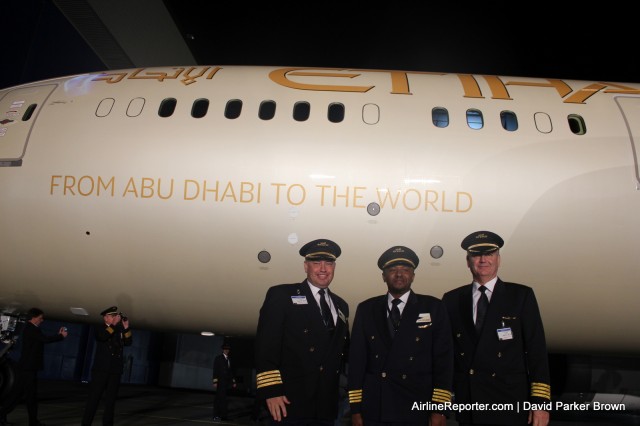 Etihad is hoping to move their entire fleet to the new livery within three years. This is very aggressive, considering that they have about 100 aircraft currently in service (including cargo). The quick re-branding won’t be cheap, but they stated, “we believe that the positive impact the new livery will have will far exceed any costs involved in re-painting the aircraft.”

For those of you who are fans of Etihad’s special liveries, do not worry — they plan to keep them around, and even introduce a few new ones. 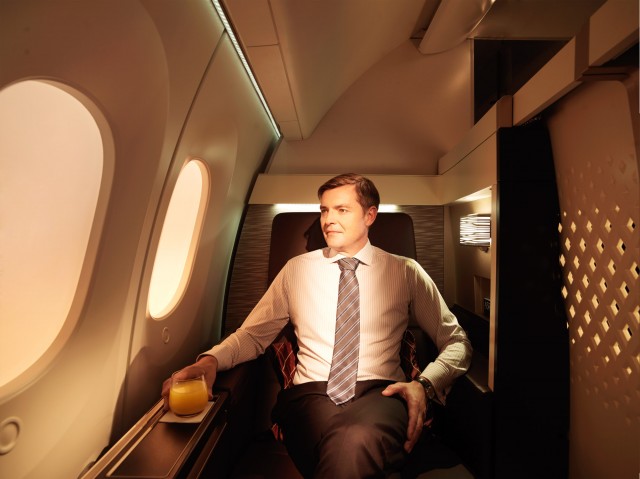 Unfortunately, we didn’t have the opportunity to board the plane to see the new product inside, but it does sound impressive. Etihad’s 787-9 will have eight First Suites in a 1-2-1 configuration. Each suite wil have a 26″ wide seat that converts into a fully flat 80’5″ bed. Not only will the space have its own 24-inch TV monitor, but also a chilled mini-bar.

The Dreamliner will have 28 Business Studios, also in a 1-2-1 set up. These seats will have a 22-inch seat width and a bed length ranging from 75.7″ to 80.5″. There will be an 18″ monitor with many other amenities expected in this level of premium product. 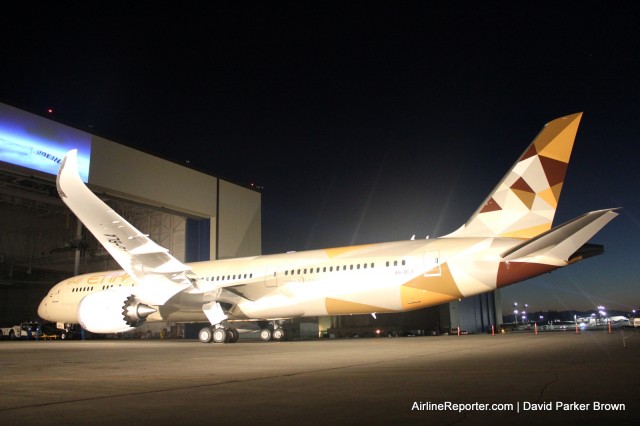 Etihad unveils their new livery on a Boeing 787-9

Etihad currently has no plans to offer a premium economy product. 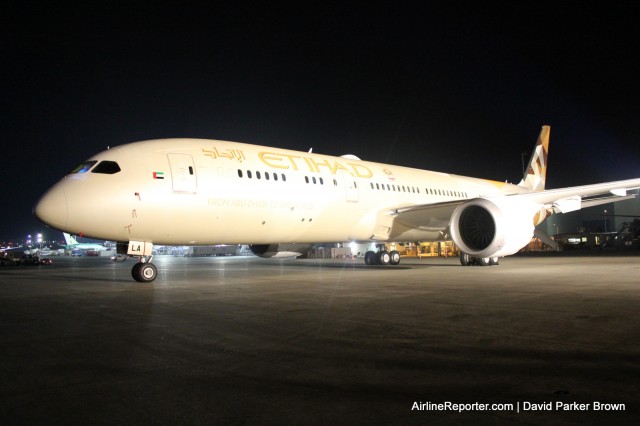 After the display was over, some of us had the opportunity to sit down with airline executives, including Peter Baumgartner, the Chief Commercial Officer. There was no hiding that Baumgartner was excited, not only for the new design and finally getting close to taking the delivery of their first 787, but also about the future of Etihad Airways.

When asked, Baumgartner confidently stated that he feels Etihad’s Dreamliner product is the best of any other product currently seen on the 787. But he also admitted that getting there was not an easy task. 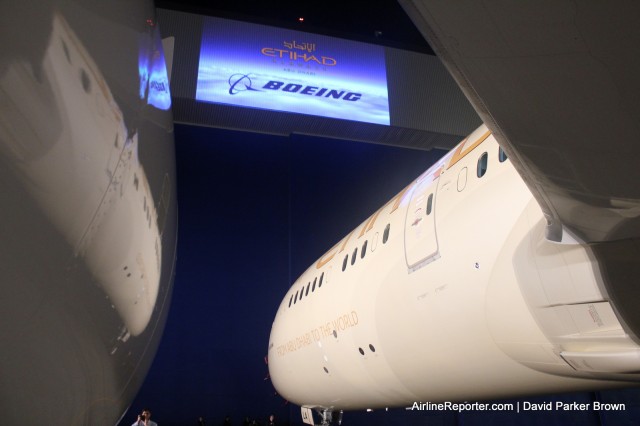 Boeing displayed their logo with Etihad’s on the hangar. This picture is shot standing between the plane and the GEnx engine.

Purchasing a Dreamliner is a unique experience. Airline customers head to the Dreamliner Gallery and choose from a pre-selected number of interior choices. This is different from most other airliners where an airline first buys the frame, then works with other companies on the interior. However, for Etihad, the choices in the Dreamliner catalog were not enough and they wanted more. This turned out not to be an easy task.

Baumgartner admitted that there were some tough conversations with Boeing, but he is happy with the result.

When I reached out to Boeing to see how they handled the airline’s demands, Julie O’Donnell with 787 Communications responded, “We offer a wide selection of options to meet our many customers’ diverse needs. Those requirements continually evolve and as they do, we work closely with our customers to offer new creative and competitive solutions.”

Although he feels confident that they will take the lead with innovative interior products, he is aware that other airlines are always working hard to complete, and Etihad will need to work hard to stay ahead.

Etihad expects to take delivery of this first 787-9 sometime in December, and plans to inaugurate its first commercial flight during the first quarter of 2015. The airline has 41 Boeing 787-9s on order and an additional 30 of the larger 787-10s on order.

I wasn’t so sure about the livery at first, but now I’m sure its great.

Great, finally, I love it. Seems like polygonal graphics on planes, cars and trucks are very tredy at the moment….

I for one, will be missing the old EY livery.

Missing the old is one thing — but do you like the new one? 🙂

No I really don’t. The tail on it’s own was good, but the stuff around it destroyed it. Plus the yellow / gold body makes the whole thing look cheap (I think it will especially on photos). And on the A380 the proportions just don’t look right. On the B789 it doesn’t look as bad. In my opinion even the new China Eastern livery looks bad (guess that this is very controverse 😛 )

OMG, a much needed followup to your excellent article is the cargo cutouts…please photo the UPS on board sleep facilities. I am sure they must be excellent, since they are the PROs when it comes to FLYING THE CLOCK. Thanks.

I am surprised you said a lot of people seem to like the new design, I like a lot of people, hate it. It’s an absolutely vile and disgusting change. They have gone from a classy, regal looking design, with the crest, to this awful abstract nonsense that lots of airlines are going for right now. As someone who has flown Etihad before and generally like them, this epic fail will make me think again and more than likely fly Emirates in future. Emirates seem to understand and value their classic design whereas Etihad have naively decided to follow this abstract trend and have sold their identity. Awful. Not for me.

AirlineReporter, through our site and social media channels get a lot of feedback about any new livery design. I think Etihad’s is the one where we received the least amount of negative feedback, where you are actually only #2 (for reference I think Southwest’s got like 25+ in the first 30min).

It is a radical departure from the classic look, but I think that is the direction that they are trying to head.

Looks like a reimagines BA one world tail… That was from the 90s? Damn..

Just got a view of the Etihad A380 from the lounge at Heathrow. It’s stunning – the silver and gold geometry speaks to the Arabic roots of the airline, and it is SUCH an improvement over the old, institutional-looking tail display, which always reminded me of a government aircraft. Well done.

It really is something seeing it in person isn’t it?

I hate that livery. It is like shattered glass, so put an UAE flag on the tail, like Emirates. I will put you under Emirates Airlines if you don’t!!! Stupidest livery ever!!!!