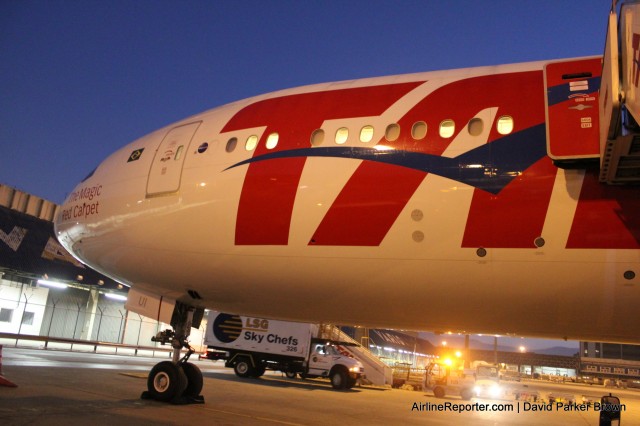 Cheers: The good customer service really made this flight stand out
Jeers: The product is old, but is in process of being replaced
Bottom Line: I hit some bumps, but still felt this was a good flight experience 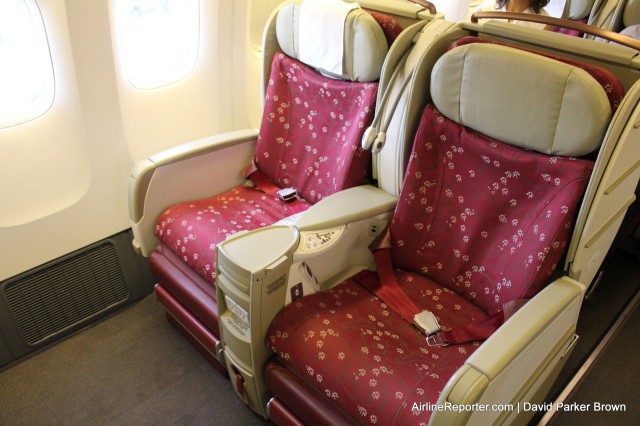 I was recently invited by TAM Airlines to travel down to Sao Paulo to check out their operations. Of course, with any trip, one of the best parts is the flight – especially when it involves business class.

Previously, I had the chance to check out the interior of a new TAM Boeing 777-300ER, but I was excited to put the product and service to the test. My flight originated in New York at JFK and I ended up with a two-hour layover in JFK (was supposed to be four, but had a flight delay out of Seattle). I was a little bit nervous since I didn’t yet have a boarding pass for my TAM flight. 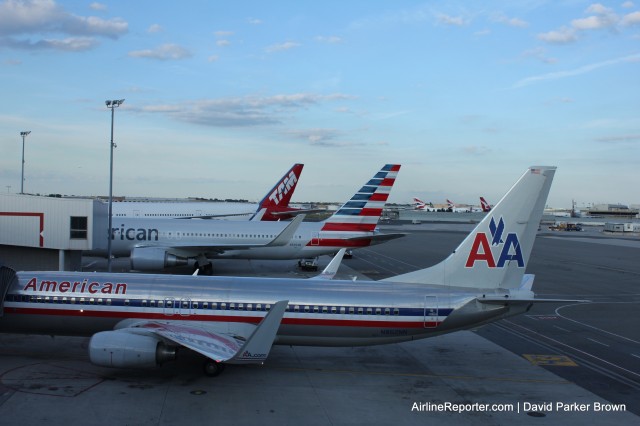 The TAM 777-300ER sitting at JFK. The view is from the American Admiral’s Club

You see, sometimes, when flying with a media non-revenue ticket, I am not able to check-in at home or via the airline’s app. I have to see an agent at the counter to get it. Normally, not that big of a deal, but I flew into Terminal 8 on American, which is the same terminal as my TAM flight. I had a business class ticket, so wanted to use my lounge access, but the gate ticket desk wouldn’t be open for another hour.

I headed to the Admiral’s Club hoping to get help. Although TAM and American are both part of oneworld, the folks in the lounge were not able to print me a boarding pass. I explained my situation to the lady at the lounge and she was nice enough to give me access to wait for the ticket counter to open.  Much better than my “no lounge for you!” experience in Istanbul. 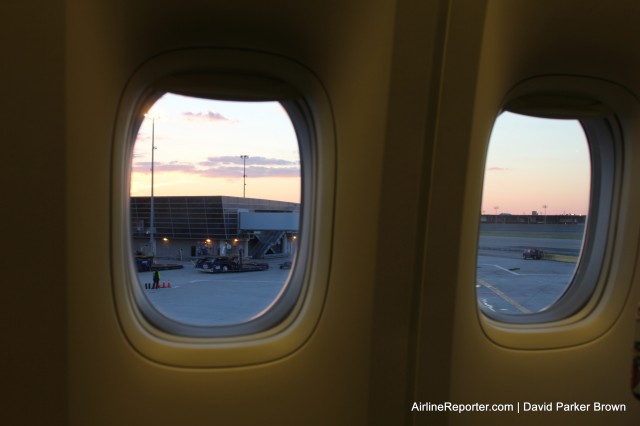 This is where I met up with my travel mates, Cynthia Drescher and Jason Rabinowitz who were also going on the same trip. It was nice to catch up with them, have a beer, and wait to be able to get my ticket.

When the time came, I headed down to the oddly-hot gate area until staff arrived. I asked for a window seat and I got the last one – 10A. Cool.

When I got back to the lounge, I mentioned my seat and Cynthia said she had the same assignment. Well heck. Back to the gate we went and I was then given 10C. No worries, an aisle, I could make due. 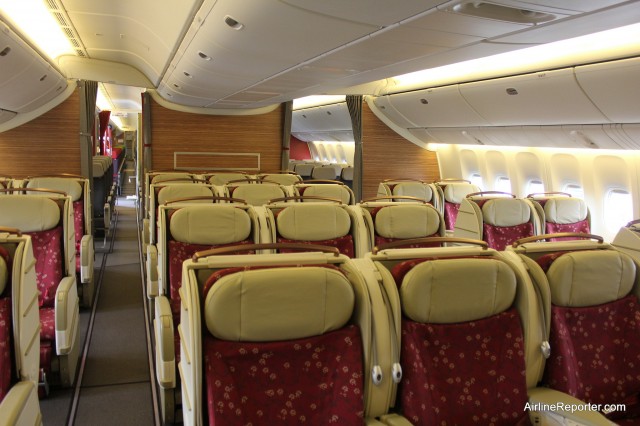 The business class cabin of the TAM 777

I was able to board, but when I got to 10C, I found another passenger sitting in it.  Argh. I assumed that my seat assignment was messed up again, so I decided to set up camp in 10H, which was empty and next to Jason. Unfortunately a passenger did show up to 10H and he made it clear that he was not happy that I was sitting there. No problem dude – the seat is all yours.

A gate agent was on the plane and I explained my situation (yes, yes, I know I probably should have talked to the flight crew at the beginning). The crew was very nice and professional and found out that the passenger in 10C was really supposed to be in 10G and I finally had a home — or did I? 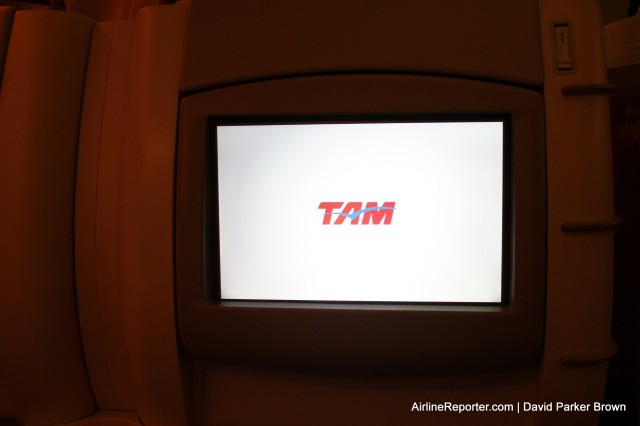 I am really good at locking up IFE systems

It wasn’t 10 minutes into the flight until I managed to lock up the in-flight entertainment. I seem to have bad luck with these systems and break them quite frequently. But before it got totally locked up, I somehow changed the language to French. Go me.

BONUS: Video of our take off from JFK by Jason Rabinowitz

The flight attendant was very kind and helpful and was able to re-start my system but it didn’t load up properly. We tried again and ended up with the same broken result. 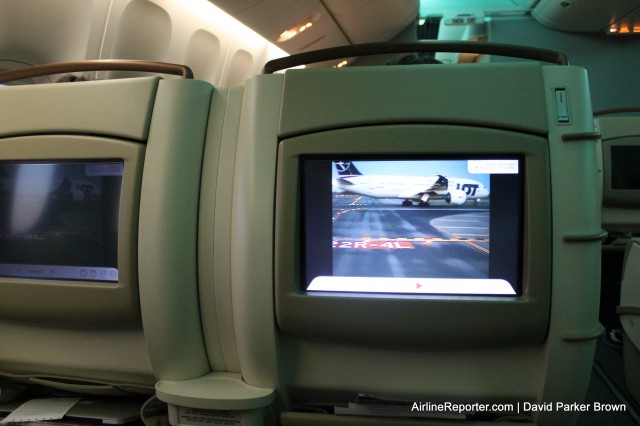 When the IFE system works, it was pretty slick. This shows the forward camera and us chasing a LOT 787 at JFK

I have to take a moment here and say how awesome Ricardo, the flight attendant, was. When I was seat hopping, he always made sure I had some champagne in hand. When I was in the process of trying to re-start my IFE three times, he always remembered and kept checking in with me (and giving me more champagne). Great service, great sense of humor and took a lot of pride in his job. To be honest, he was probably one of the best flight attendants I have experienced – so cheers to him and the others that worked with him.

Anyhow, I opted to move seats again and now was in 11G. This was on the aisle in the center section, but the middle seat was empty – more importantly, it had a working IFE system. 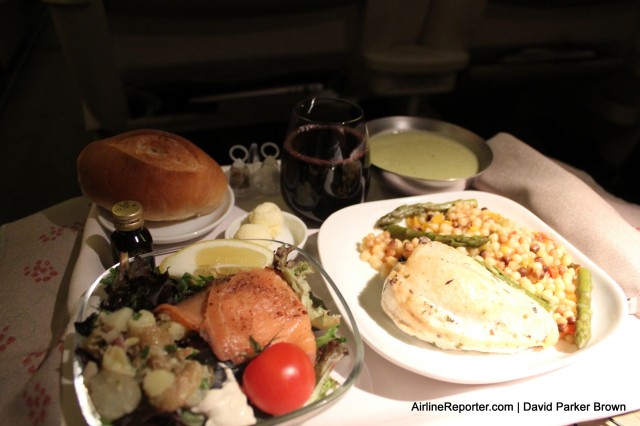 Once I got settled in my new seat, it was time for dinner. I opted for the smoked salmon served with potato salad and greens, acorn soup, mushroom-stuffed chicken served with Israeli couscous, steamed vegetables, and asparagus. The chicken was a bit dry, but holy smokes was the acorn soup good! I am also normally not a fan of couscous, but I ended up eating all of it.

Normally, for dessert, I would pick the ice cream (I am always in awe of eating frozen ice cream at 30,000 feet), but on this flight I opted instead for apple crumble. I paired my meal with Abadia Retuerta Spanish wine, although I was hoping to try the traditional Brazilian Caipirinha, but I decided to fall asleep instead. 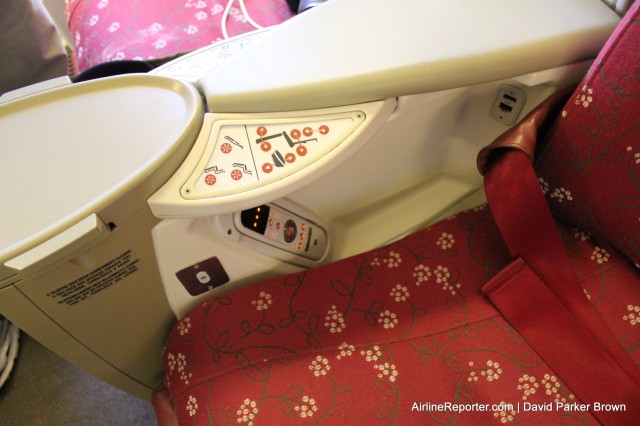 Quite a few options with the seat. I only wish it went to full flat.

Our plane left JFK at about 8:00pm and we were scheduled to arrive at GRU at 6:30am with a full day of activities – so I needed to get some sleep.

The seats do not lie fully flat, but they come pretty darn close. I would say that the comfort level is pretty average compared to other business class seats. I am one that really doesn’t need a full-flat to get comfortable, but having one would have been nice. I was easily able to doze off and probably got about 4-5 hours of sleep — which is not bad. 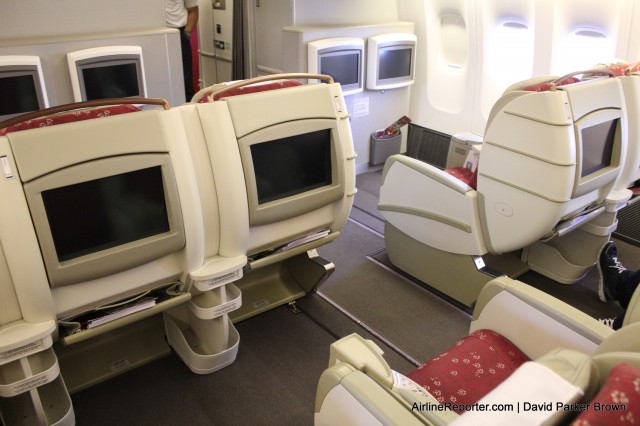 When breakfast came around, I opted out (it was 2am at home and I wasn’t hungry) and instead got more sleep. Every time I skip breakfast on the flight, I always regret it. Not because I am hungry later, but I really want to experience the different types of food offered. I did hear from others that it was good.

Our flight ended up arriving about 45 minutes early, which was nice, but I kind of wished I had that extra 45 minutes to sleep. We also had the opportunity to de-plane on the tarmac, which is a pain for most passengers, but I always enjoy seeing the plane up close and personal. 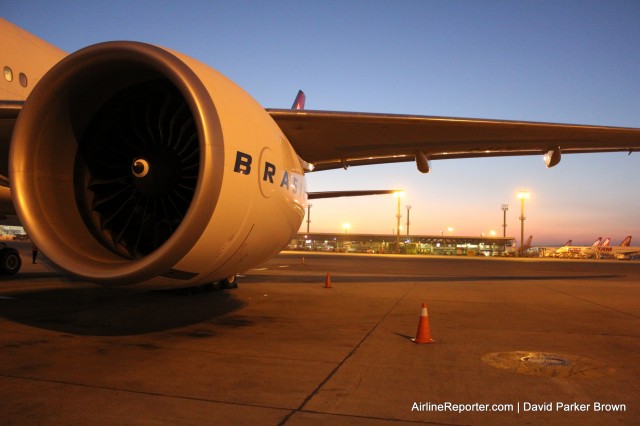 Saying hello to the GE90 engine while de-planing at GRU

Yes, somethings went wrong during my trip, but I didn’t feel too bad about it. Not having the boarding pass was something that most other passengers wouldn’t have experienced and I would have moved seats less if I would have just asked the flight crew about it earlier. Everyone that I worked with was very kind, understanding, and helpful.

The biggest complaint was the business class product. The plane is new – delivered in July 2013 – and has a new and competitive First Class product (that the airline will be phasing out), but the business product is behind most others. The 2-3-2 layout is not fun if you are in that middle seat and, of course, being able to lie flat is a big concern for most passengers. 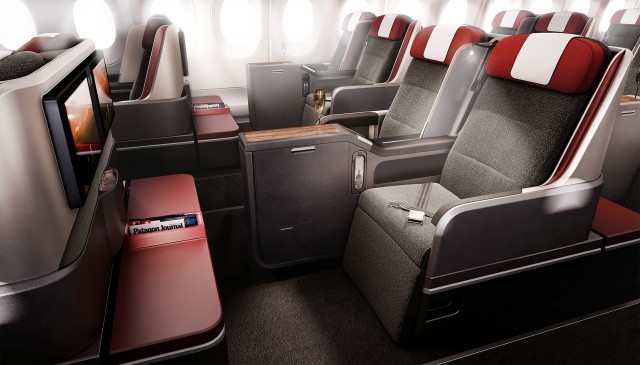 New Business Class as shown in the A350 will be similar in the 777 – Image: TAM Airlines

The good news is that TAM is planning to upgrade their business class product in the 777s soon. Starting in early September of this year and ending in April of 2015, TAM will be upgrading the seats to be more in line with the LATAM unified cabin.

This will also be the product that will show up in TAM’s new Airbus A350s. On the A350, the seats will recline 180 degrees, but on the retrofitted 777s, they will recline at 170 degrees  and be 15% larger overall. At the time of posting, TAM has not stated if business will still be in a 2-3-2 or changed to a 2-2-2 configuration on the 777. Either way, it looks like a slick product and I look forward to checking it out.

Hi, I live in Brazil and I fly a lot.

TAM was a good company, but since his president died the company got a quality degrade.

Several planes crashes and direspetcs for customers are a commom issue in TAM Flights. Dirty and damedged seats, in-flight entertainment not working and do-nothing crew are usual in TAM flighs.

I think the main problem was chosing a former bank director to be the new president of the company. Usually these guys has one track mind for money. No care about customer problem.

For instance, after the last TAM crash in Sao Paulo, TAM´s president never showed up to an interview or say sorry for the deaths.

I am sure he did not want to make any dirty spot for himself.

As you can see on the next link , he knows a lot on how to fix an airplane.

He´s got everything in a booklet:

As you could see, even being in bussiness class problems happens a lot.

Me, I gave up flying TAM and I fell sorry for LAN and ONE WORLD.

Alexandre, you are right!

Tam was a excellent Airline before the president passed way.
After they join Lan and now being LATAM, the quality degraded.
Thanks God AZUL AIRLINES is starting to fly internationally and be the Brazil’s carrier flag.
TAM and LAN will unify in a new brand soon….

It’s my first time to see TAM flight reviews.Now I live in Beijing,so most South America are strange for me.I really like your article and photos.May I ask if I can share your photos to my Chinese social software to make more Chinese aircraft fans can know you and the airlines they aren’t often involved?

We’re flying Delta biz class on the same route, and it has 1-2-1 seating in business class. Is TAM appreciably cheaper?

Was.on.a.flt,from JFK and there was
a female that has never flew before
and the way the fly,attendents took
care of her making her laugh.
Put her at ease I thought that was
so nice of them..I now fly TAM every
chance I get..I normally fly DL
. Thank you Tam
. For this experience..

Pleasure to discover TAM
Fromage Paris to Sao Paolo good Flight business class okay
Today , Technical dlay for my fligght, meeting In Paris tomorrow i hav to cancel as nà´ body is able to inform me about what is happened
OnLy teçhnical delay
Okay so !
‘We Will hav more information at 00.00 , flight 8180 10 35 to Paris
Ok but after mingnight ? ‘We do not Know !’ May be a fligght tomorrow!
Pleasure to be In business , nà´ comment