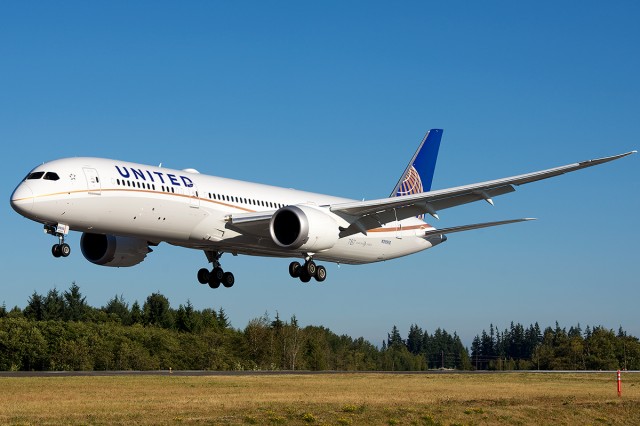 United recently swapped their remaining 787-8 orders for 787-10s. This, however is a -9 – Photo: Bernie Leighton | AirlineReporter

Boeing sees a market for 36,770 new aircraft between 2014 and 2033; only 2,490 of them are in the “regional” category. They are also clear to not differentiate the single-aisle market by size, but other than in the “Very Large Aircraft” category (think 747 and A380), their forecast for total aircraft demand is very bullish.

With United Airlines converting seven of its eight remaining 787-8 orders to the largest Dreamliner, the 787-10, it is a situation reminiscent of Air Berlin, pending approval, switching their 787-8s to larger 787-9s. 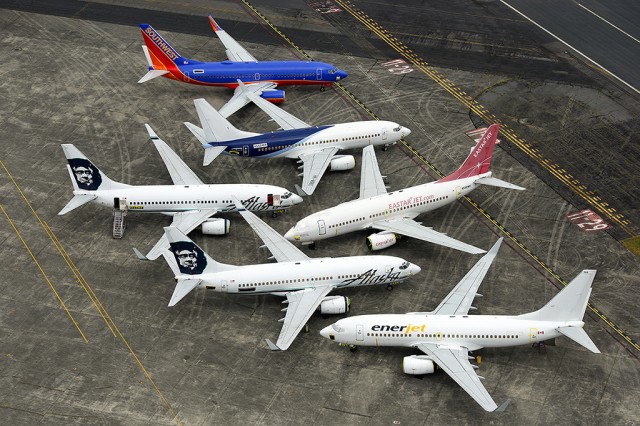 Many airlines are trading 737-700s for larger 737-800s as they come off lease. Southwest, however, is more than happy to have the smaller birds – Photo: Bernie Leighton | AirlineReporter

The 737-7MAX  has garnered the fewest orders of  the family (55). On the Airbus side of the spectrum, the A350-800’s future hangs in a precarious balance. The A319NEO has only garnered a total order for 45 frames. The smaller the next-generation aircraft, the smaller the backlog. Or at least, that is what the evidence shows.

The reason, as always, comes down to the most important question an airline has to answer: “what makes the most profit?” 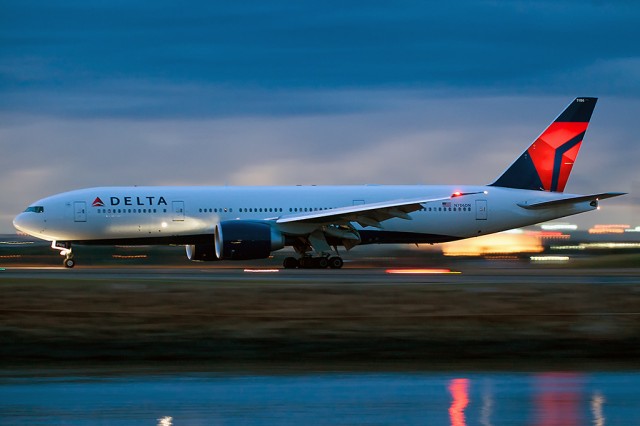 Sales of the 777-200LR have been dwarfed by that of its larger sibling, the -300ER – Photo: Bernie Leighton | AirlineReporter

That question is, of course, impossible to answer in one article, but the case for larger aircraft is one that can be examined by first explaining the economic concept of “opportunity cost”. Glibly, given a scarce resource – a firm always has to account for the value of the best choice not made assuming all choices are mutually exclusive.

So, with the scarce resource of financing, why is a larger aircraft a better solution?

According to IATA’s (International Air Transport Association) 2013-2017 Airline Industry forecast, passenger traffic is supposed to rise by 930 million. Now, of course, that broad brush ignores where most of the growth will happen, but the forecast is starting to be empirically verifiable.

Between January of 2013 and January of this year, passenger numbers were up 8%, while available capacity was only up 6.7%. Demand was outpacing supply; same goes for the May numbers (except by May of this year, United States domestic seat factors were at a beautiful average of 86%). 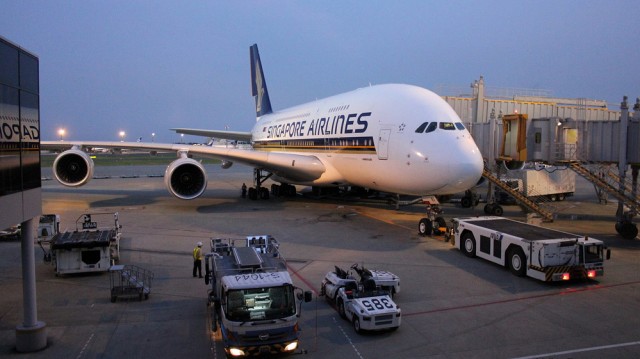 The Airbus A380 is the largest passenger aircraft available to airlines – Photo: David Parker Brown | AirlineReporter

This is a tantalizing bit of information to every fleet planner. By far not the only data they go on, but it is enough to bring me to explain the next concept.

With every new route, or existing route, an airline has to not only manage its costs, but it also has to investigate customer spill. Customer spill is a simple concept with a vast amount of complex math behind it. The math is not important, but the fact is that sometimes it is worth it to let the passenger fly the competition. Unless the route is a monopoly, it may be better to cede specific market segments to maintain space for the demographic your airline is after.

The problem is when spill is happening because your airline lacks the frequency or capacity to meet demand. If traffic is increasing, in part because of GDP growth, availability, existing demand being consolidated, or any number of reasons, the last thing you want as an airline is to be unable to meet the demand and let the other guy have the money.

It’s fiscally prudent, therefore, to make the choice that will allow not only efficiency gains but also capacity growth. It’s true that demand will not grow forever, and there is always the opportunity of a recession. No one, however, has ever sold airplanes by saying the sky might fall.

The Airbus A318 can be worth more in parts than as a flyable aircraft – Photo: David Parker Brown | AirlineReporter

The next reason, largely pushed by lessors, is aircraft residual value. Airlines often run their fleet plans on fixed retirement intervals. With the days of D-checks behind us, and the top-down approach of aircraft maintenance resulting in different levels of C checks – the intervals may change, but aircraft will leave the fleet eventually.

When the aircraft leaves the fleet, it’s preferable that it still has some value in it so that it can be either leased again or sold to another carrier. With composite aircraft, the case for residual value is probably even stronger as we do not yet know if they are only a 20-30 year asset. It’s important to have an asset that will still be useful in that timespan, when the cost is in the tens to hundreds of millions of dollars. Airbus A318 operators learned this the hard way, because the aircraft was worth more as spare parts for the A320s worldwide than as an actual flying asset. No one wants their asset to depreciate to zero ahead of their curve, after all.

On that same line of thinking, airlines are not buying aircraft for today – they are buying aircraft they hope they can grow into.  Just like the young couple when they buy their first house. Why buy the smallest type in the family when the larger ones are usually more capable for only a slightly higher fee?

You would think, then, that Very Large Aircraft (VLA) – like the A380 and 747-8 – would be flying off the shelves with these forecasts. Evidence shows they are not, and I do not expect that to change. The rationale for the VLA is for transporting massive amounts of passengers from one hub to another at as low a unit cost as possible. They also work very well for airports that have strict slot-controlling policies. The problem with both types is that unless they are at a very high load factor, the trip costs are so high that they are, at best, breaking even. 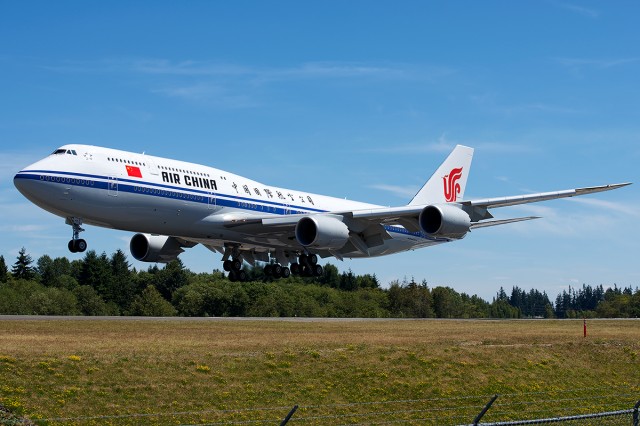 Air China is one of only four airlines that has orders for the 747-8I – Photo: Bernie Leighton | AirlineReporter

There will come a time when airports become so congested it will become uneconomical to use a large twin like a 777-300ER multiple times a day. But with business travelers still demanding frequency, those days are a while away yet.

With all that in mind, the best possible choice is to the get the aircraft that has the best capabilities, but also one that lets you expand capacity.

In other words, expect the smallest member of an aircraft family to garner the least orders.

From the passenger point of view, having 500 people arrive all at once on one jet is more likely to result in queues at airport facilities than having 250 people arrive on each of two jets several minutes apart. As jets get bigger, airports need to plan more for surge capacity than average capacity.

Of course, when airports be come so congested their managers try to expand.

Ideally, they would expand to forecast, but as we know, especially in democratic regions, the red tape delay maintains congestion for decades. We can wonder if those who market VLA lobby against expansion, or at least contribute to those delays?

Your article on BIG planes was outstanding. Really well written. A+ work.

One more thing to note is that larger planes have better economies of scale. Alaska Airlines noted in a recent investor presentation that replacing a 737-700 with a 737-900ER increases Trip Costs by 10% but also increases Trip Revenue by 20%. Assuming an airline can fill the extra seats enough of the time, it will be more profitable to fly the bigger plane.