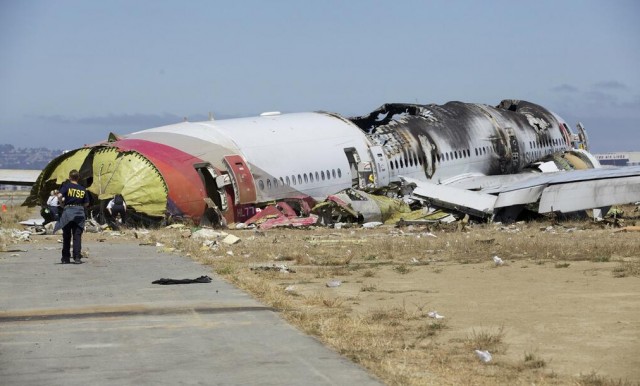 The NTSB also released this video which illustrates the events as the plane approached SFO’s runway 28L:

The probable cause statement is worded as such:

The National Transportation Safety Board determines that the probable cause of this accident was the flight crewâ€™s mismanagement of the airplaneâ€™s descent during the visual approach, the pilot flyingâ€™s unintended deactivation of automatic airspeed control, the flight crewâ€™s inadequate monitoring of airspeed, and the flight crewâ€™s delayed execution of a go-around after they became aware that the airplane was below acceptable glidepath and airspeed tolerances. Contributing to the accident were; (1) the complexities of the autothrottle and autopilot flight director systems that were inadequately described in Boeingâ€™s documentation and Asianaâ€™s pilot training, which increased the likelihood of mode error; (2) the flight crewâ€™s nonstandard communication and coordination regarding the use of the autothrottle and autopilot flight director systems; (3) the pilot flyingâ€™s inadequate training on the planning and executing of visual approaches; (4) the pilot monitoring/instructor pilotâ€™s inadequate supervision of the pilot flying; and (5) flight crew fatigue which likely degraded their performance. 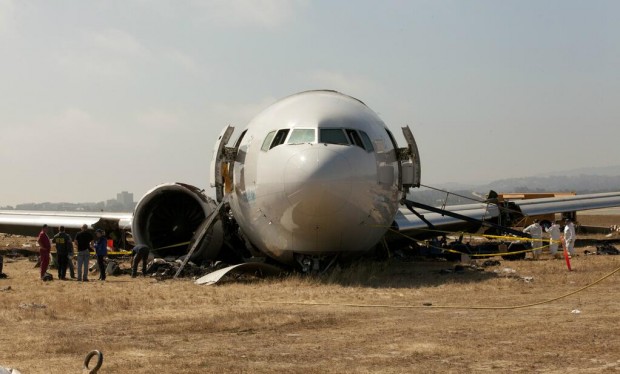 Nose shot of the Asiana Airlines Boeing 777 from the NTSB.

This statement recognizes that a mismanaged approach by the pilots was the fundamental cause of the accident. However, the report also highlightsÂ the complexity of the Boeing autopilot and autothrottle systems – and a lack of training about this complexity – as a contributing factor. Â TheÂ specific complexity in questionÂ is well known to 777 pilots and is informally calledÂ the “FLCH trap”.

This sequence of events occursÂ whenÂ the pilots initially set the aircraft’s autothrottle to maintain a given airspeed, but then set the autopilot to change the aircraft’s altitude using the Flight Level Change (FLCH) mode. Â Once the FLCH mode is selected, the autothrottle disengages, which canÂ allow the plane to slow down below the set airspeed. Â The report goes on to makes severalÂ recommendations to Boeing: to update the aircraft operationÂ manual to warn about this specific sequence of events, and to develop a context-specific airspeed warning system to ensure airspeed remains within limits for all phases of flight.

The FLCH trap notwithstanding, there is no doubt that the pilots of Asiana 214 should have been aware of the decreasing airspeed as the plane approached the runway. Â As anyone who has ever been student pilot can attest, one of the very firstÂ lessons of early flight training is flying a stabilized approach. Â This includes flying a consistentÂ glideslope to the runway threshold and flying a constant airspeed. Â As the video above shows, bothÂ the airspeed andÂ the glideslope varied wildlyÂ during the approach to runway 28L. Â As the aircraft approached the runway threshold, the pilots got further and further behind the curve, ultimately recognizing too late that the landing was unsalvageable.

OneÂ thing not identifiedÂ as a contributing factor to the accident was the fact that the instrument landing system (ILS) glideslope was out of service at the time of the accident, which forced the pilots to manually fly the aircraft instead of configuring the plane to fly the approach automatically. Â The report rightly assumes that any qualified pilot should be capable of safely flying a manual approach without the useÂ of automation and instrument landing systems. Â One of the recommendations made to Asiana was to decrease the reliance on automated approaches and to require pilots to regularlyÂ fly manual approaches.

The report alsoÂ considersÂ what happened to the plane during the crash itself. Â One area of interest areÂ the slides/rafts on the 1R and 2R doors, which inflated inside the cabin, temporarilyÂ trapping two flight attendants in their seats. Â The slides inflated as a result of the forces of the crash, which far exceeded the design limits of the slides. Â The report recommends evaluating the need to change the load testing that slides are subject to. 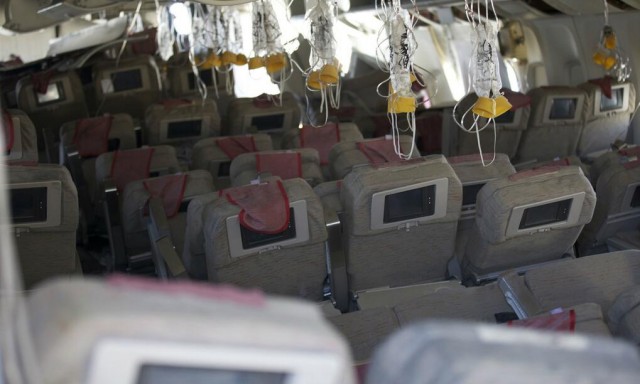 Another area the report examines is the forces that were experienced by passengers during the crash. Â Many passengersÂ received high thoracic spinal injuries as a result of lateral forces. Â The report recommends additional research into the injury mechanism experienced by these passengers, which may potentially result in new regulations for seat protection to mitigate against this kind of injury.

Finally, the report addresses the response by airport personnel following the crash. Â One of the three fatalities was as a direct result of a passenger being struck by a fire truck responding. Â This passenger had been ejected from the aircraft during the crash, was lying on the ground, and was not seen by responding firefighters. Â The report recommends that the aircraft rescue and firefighting working group work to establish best practices and training to avoid similar events in the future. Â Interestingly enough, both of the passengers that were ejected from the plane and perished were not wearing their seat belts.

Given the horrible nature of the crash, it is remarkable that more people didn’t lose their life. Â Modern air travel is among the safestÂ transportation methods available; hopefully, the conclusions and recommendations from this incident can help make flying even safer.

The full report is available on the NTSB website.

https://www.airlinereporter.com/author/davedlg/
TCAS – The Last Line of Defense Against Midair Collisions
Flying on a Classic Boeing B-29 Superfortress
5 Comments

Wow, sympathies to those that died but come on…

Basic rule of flying AND driving is WEAR SEAT BELTS.

The only parties to blame are the pilots and the airline. You bought this machine, and it’s solely your responsibility to master its use safely. The airline should be shut down, or at least forbidden to fly into the US.

Most people on board are still alive thanks to this rock-solid modern aircraft.

Agreed that the sole blame is with the pilots – and the probable cause statement reflects this. However, aviation safety comes from defense in depth from multiple redundant layers of protection. The astounding safety of modern aviation comes from not being content with simply blaming crashes on pilot error, but asking the question “how can this sort of thing be prevented in the future?” Without asking that question and constantly pushing the safety envelope, we’d still see the accident rates we did decades ago. So yes, the pilots and no one else are to blame. However there are changes that can and should be made in the system which reduce the risk of inevitable human error.

@David Delagarza I agree with you generally. But in addition to perhaps making changes to the 777 auto-flight system to protect pilots from themselves, certainly Asiana training needs to be re-thought. They put two people in the cockpit of a 777 with hundreds of innocent people on board who did not know how to manually fly a VFR approach in good weather. That the PF didn’t understand the 777 autoflight system could and should have been caught in examinations given in training. It didn’t happen and three people are dead because of it and many others with life-changing injuries. The Pilot Monitoring didn’t get it either and also didn’t monitor. Sumwalt notwithstanding, these guys *were* incompetent and at least part of the reason was that they were not properly trained and tested before allowing them to fly a $300M airplane with hundreds of passengers on board.

We’ve seen this story before, in the Air France 447 and Colgan Air crashes — people in the cockpit who simply don’t know what they are doing. There is a systemic problem here, and it isn’t the complexity of the 777 auto-flight system. Properly trained people can and do manage the 777 just fine. If that were not the case, 777s would be falling out of the sky with regularity, which isn’t happening. The issue is that incompetent people slip through the system, are allowed to fly passengers whose lives depend on them, and sometimes circumstances reveal their incompetence, as in this crash and the two others I mentioned, with the aggregate loss of over 300 lives.

As a retired airline captain with almost 38 years experience, including 28 years in check and training as well as 8 years experience in SE Asia, I think that the NTSB report should have placed more emphasis on the fact that the 28L ILS was out of service.
There is no doubt that the crew were incompetent and that Asiana training was deficient in teaching the very basic fundamentals of flying a visual approach as well as monitoring what was going on.
It is all very well for the NTSB to require Asiana to improve its training and for Boeing to modify its training material but the fact remains if the ILS had been operational there would not have been an accident, as the crew would have used the autopilot (with the ILS captured) down to a lower/safer disconnect altitude.
Pilots today, not just in Asia, but in other parts of the world have become completely “locked in” to the automatics, a situation that both manufacturers have supported – Airbus more so than Boeing, in my opinion.
To expect these pilots to do the odd hand flown visual approach and maintain competency is an illusion. There is just not the “will” to do it as it is too much like hard work and they don’t have the previous background experience from less automated aircraft to build upon.
I have seen it in my experience in this part of the world that the computer “savvy” generation of pilots just like the automation.
They don’t really understand that aiming point, rate of descent and airspeed are the best indicators of a good or bad approach.
Why the SFO airport authority did not understand that there MUST be an operational ILS for arrivals from airlines that are heavily reliant on the automatics is beyond me.
These airlines are known and the airport authority should not shut-down ILS facilities during times of these expected arrivals.
As I mentioned above I am surprised that the NTSB did not make a recommendation that to take an ILS out of service, in this day and age of digital electronics, should be avoided at all costs and if so, only when there are no expected arrivals by those “automatics” reliant airlines.