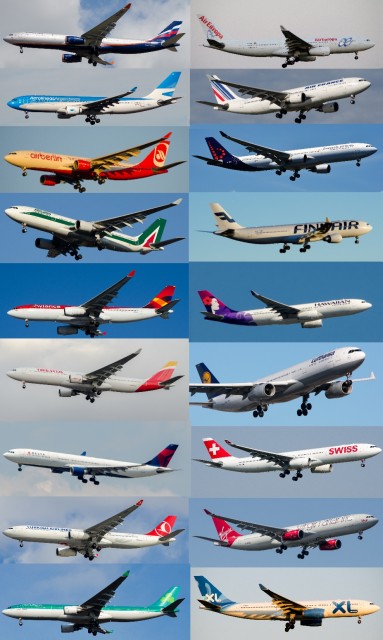 I like the XL livery. Very cool. I’ve never heard of XL Airlines. Where do they fly?

XL Airways France is a french seasonal operation. This route is CDG-JFK.

I think the Swiss looks so clean and neat!

The new Iberia livery is simple but powerful.

I juste love the Swiss and the Finnair livery. They are clean and very classy! Love it!

Love the Hawaiian, despise the Air Europa one!

First: Sorry for my limited english, but I just have to write a few words.

A great idea, the color schemes of the different airlines at a particular plane – compare here the A330.

I see it as you do, the A330 is not a classic beauty. Her hull looks a bit chubby , despite or because of her elegant wings. It hangs slightly forward when it is on the ground, and it is, and operates as it is – just typically . Yes it is a work horse, but a faithful and very good one. Or, as the airlines like to say â€œefficientâ€ .

The engines have a significant proportion, if I like a machine or not for me. For example, I find the B773 with RR engines less beautiful than the B773ER with GE90. When A330 is reversed with me, because I find the Trent700 engines the most beautiful on this Airbus.

But back to your Livery-Comparison of Airlines:

By far the worst is Air Europa coloring – She looks like a leased white-tail, which was poorly marked with the airline logo without love for design or details.

Avianca , Aer Lingus and Aerolineas Argentinas are now rare tropical birds who stand boldly against the white, unity trend. These are for me next Hawaiian with the most beautiful in the A330 comparison.

I agree with everyone about the Air Europa livery. I could have come up with a better livery than that. The current US Airways livery is also a classic in my opinion. Unfortunately it will soon be replaced by the uninspiring AA rebranding.

1) Aeroflot (the newer livery is light years ahead of the old!)
2) Virgin (looks good on the long 330)
3) Air France/Lufthansa (tie, I like many of the classic EU liveries.)
I also agree with the author on AlItalia, but they have bigger problems than livery age right now!)

I don’t think Hainan Airlines fly A330’s into JFK. Their livery is something else..

A330 is not considered a beautiful plane?! By whom?you?
Well if you ask me it’s one of the most beautiful planes today!
Boeing hasn’t have anything since B727-200 and B757-200 that
compares in beauty with the A330.

Beauty is in the eye of the beholder I guess. Personally I find the A330 just be a plain looking aircraft. But I could see where someone sees the beauty in it.