Infographic Source: SPACE.com: All about our solar system, outer space and exploration

The CST-100 is designed to carry up to seven passengers, or passengers and cargo, to low-Earth-orbit destinations, like the International Space Station or a Bigelow BA 330 station, which is planned for the future. (I will go into much more detail on the BA 330 in a future story).

The weld-less design of the CST-100 allows it to be re-used up to 10 times – at least this is the goal for now. That number could increase dramatically once actual test trials start and the design is proven.

Once ready, the CST-100 will be launched using aÂ United Launch Alliance (ULA)-provided Atlas V rocket,Â and once the mission is done, the capsule will return to Earth gently using parachutes. Although the CST-100 is designed to float on water, when returning to Earth, it will land on the ground. Currently, Boeing is scouting out potential landing areas, which are large, flat, and accessible to get out the crew within two hours of landing. 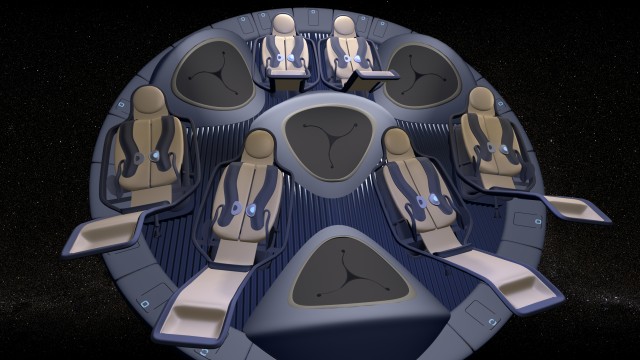 Passengers and cargo can be interchanged and flown on the CST-100 – Image: Boeing

One of the most impressive parts of the CST-100 is what Boeing is planning to do with the interior. Although the spacecraft is initially being designed for use with NASA, it could very easily be used in other future commercial projects.

â€œWe are moving into a truly commercial space market and we have to consider our potential customers â€“ beyond NASA â€“ and what they need in a future commercial spacecraft interior,â€ said Chris Ferguson, former Space Shuttle Atlantis commander and current Boeing Director of Crew and Mission Operations for the Commercial Crew Program.

Since it can take up to 30 hours from lift-off until docking, Boeing wanted to make the interior space appealing to the eyes and body. Most other space projects have a sterile, government-issue look to them. Boeing wanted to have an option for a world-class interior that also stuck to revenue generating principals.

Luckily for Boeing, they have a dedicated team of folks working at interiors at their Commercial Aircraft division. Why re-invent the wheel when Boeing could pull from resources that they already have to help create their new interiors? 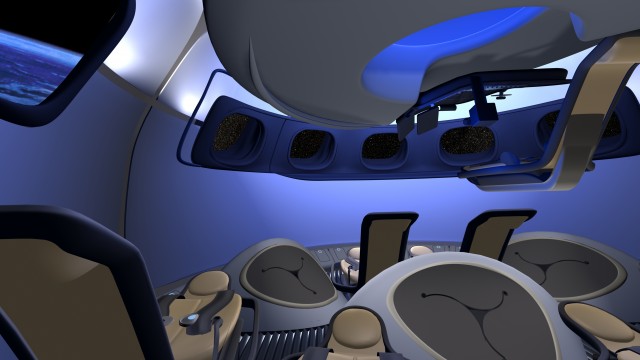 The lighting will look like the Boeing Sky Interior seen on many of the new Boeing airliners – Image: Boeing

Boeing formed teams from Commercial Aircraft to help think and design what could be possible. They wanted to make the design more commercial and give it the, “Boeing touch.” Boeing has done a great job with their interiors on the 787 and the new 737s, and they took that research to put it into the CST-100.

That’s right, there will be an option to have a “Boeing LED Sky Lighting,” a set up that mimics that Boeing Sky Interior in space. How cool is that? 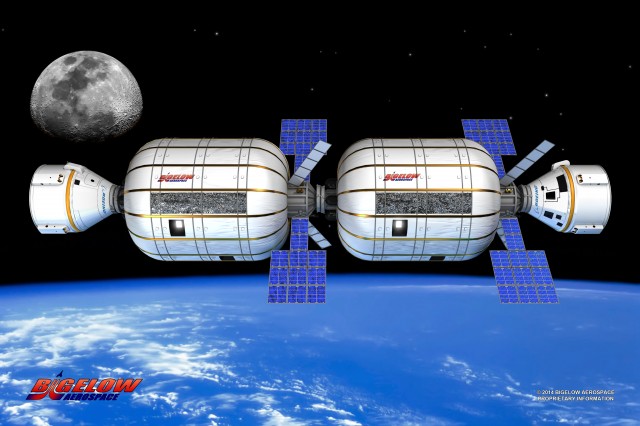 This is one of the debates going on within Boeing right now – should the CST-100 have windows or not? As part of the contract with NASA, there needs to be one window for the pilot to successfully dock to their target. But the question is more related toÂ passengers and connecting them to the space flight experience.

Of course in a perfect world, there would be no question of using windows. But as with almost anything good, there are drawbacks; windows increase weight, complexity, and costs. The windows in the Space Shuttle are five-inches long, and that alone adds weight, not to mention the additional structure to support the windows.

One solution Boeing is considering is using a large LED screen to connect passengers to the exterior experience, providing views and details about their flight. Think ofÂ it like the view screen on Star Trek, but real.

Even though windows might add complexity and costs, you can’t beat seeing space and earth with your own eyes through the windows. I would imagine if an individual is paying millions of dollars to get access to space, they want to see the experience natively, versus via a view screen. I hope that Boeing is able to come up with some sort of compromise. 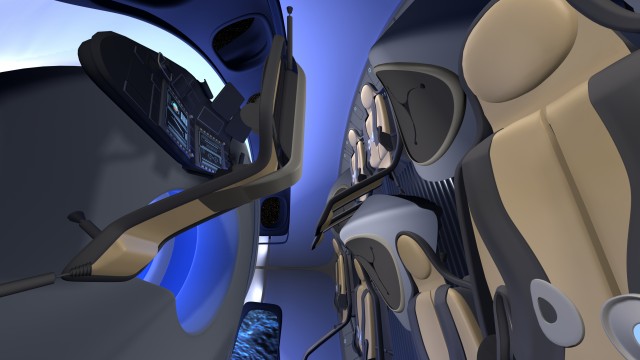 The pilot will be seated above the rest of the passengers and cargo – Image: Boeing

There would be quite a bit of free time in the CST-100, since it handles most everything on its own. The space vehicle has a pilot, but is both automated (no pilot input, but talking to the ground) and autonomous (no pilot or ground input) and able to lift off and guide itself to its destination.

But just like how most aspects of commercial airline operations can be automated, there are pilots on board to manageÂ the autonomy and take over if things go wrong. 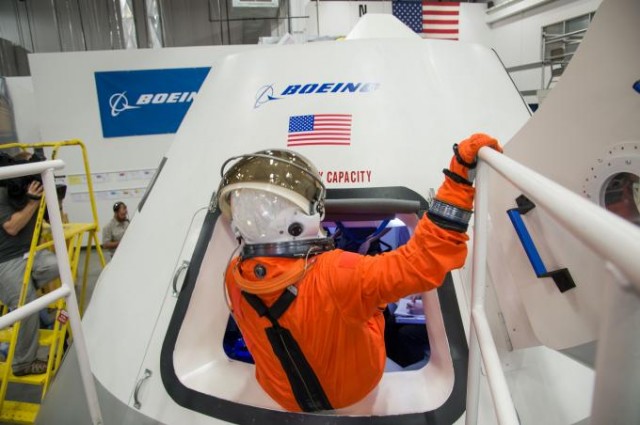 Some additional interesting features of the CST-100:

This image shows the CST-100 getting close to dock to the ISS – Image: Boeing

Boeing is expecting to start flight tests by January 2017, if NASA selects their design. If NASA does not select Boeing’s proposal, it is not known if Boeing will continue with the CST-100 for other customers or abandon the project altogether.

Why follow space travel? Well, I assume, like me, that many of you who have a fascination with commercial travel on the ground will also enjoy the thought of commercial travel in space. Steps forward, like the CST-100, are taking us all closer to a time when space travel can be accessible to more people. Remember, air travel used to be just for the privileged and wealthy and now almost everyone can get access.

Maybe someday we can get to the point where people are complaining because their commercial space lines flight to the moon or Mars is 15 minutes late. Until then, we shall follow companies like Boeing, Virgin Galactic, Space X and others to see what they come up with.

https://www.airlinereporter.com
Paine Field Aviation Day – Saturday May 17th
Qantas to Take Back a Few World Records by Changing to an A380
1 Comment

Great article. Would love to travel to space someday on one of these. Thanks for posting!