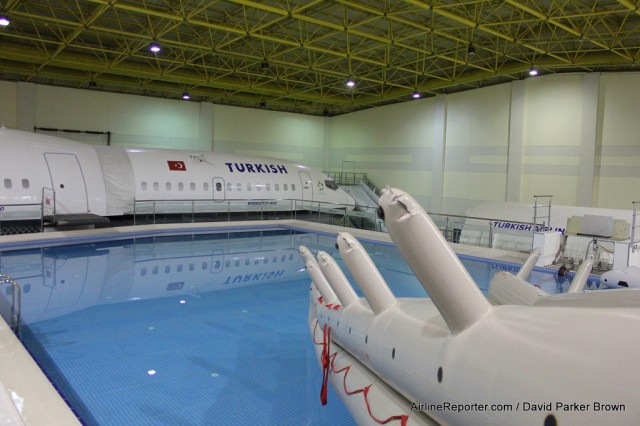 Who wouldn’t want a pool like this for themselves? Part 737, part A340/330/310, this is used for crew training at Turkish Airlines Photo: David Parker Brown | AirlineReporter

What has pools, slides, and airplanes? Okay, well the Evergreen Wings and Wave Waterpark does, but also the Turkish Airlines Flight Training CenterÂ in Istanbul. But this facility is not about fun and games – it is all serious business to make sure that passengers arrive safely to their destination. 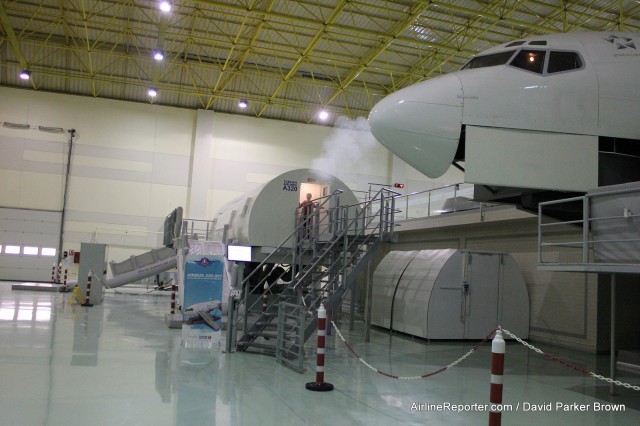 Recently, during a trip with the airline, I was invited to tour their facilities and I am never one to turn down such a tour. On the same day we were able to tour Do & Co, Turkish Airlines’ catering facility and then both the flight simulators and the crew training area. I already shared about the catering part of the trip and this story will highlight what I found during the rest of the day. 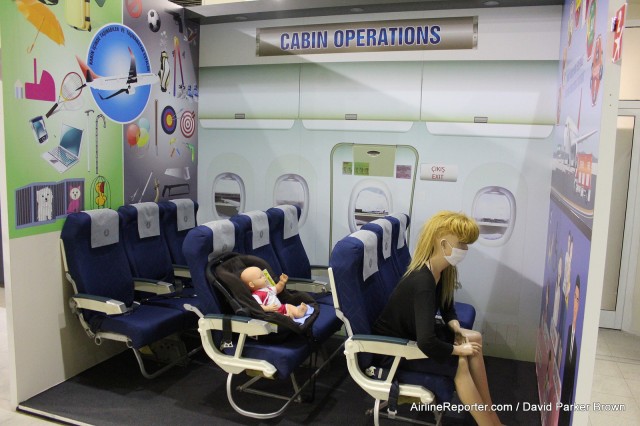 Many different scenarios can be played out in the facility

Many passengers will wrongly see flight attendants only as those who serve them food and drinks, but their primary duty is making sure that all passengers remain safe. To that end, each flight attendant, with every airline, will go through similar training on what to do during an emergency situation. 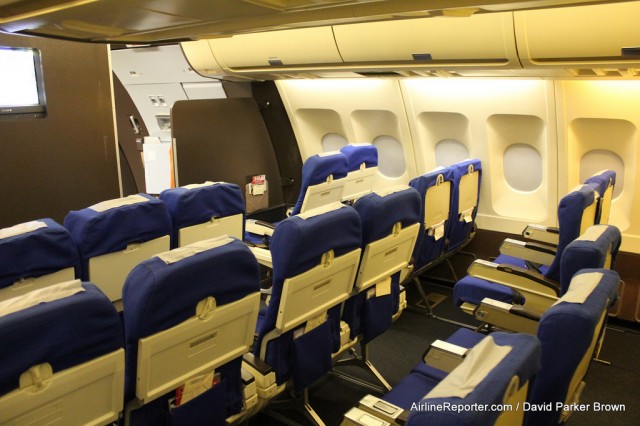 It is not just the new employees who will go through the training. The facility also does conversion (change aircraft types), recurrent, and re-qualifications (both are for current workers). 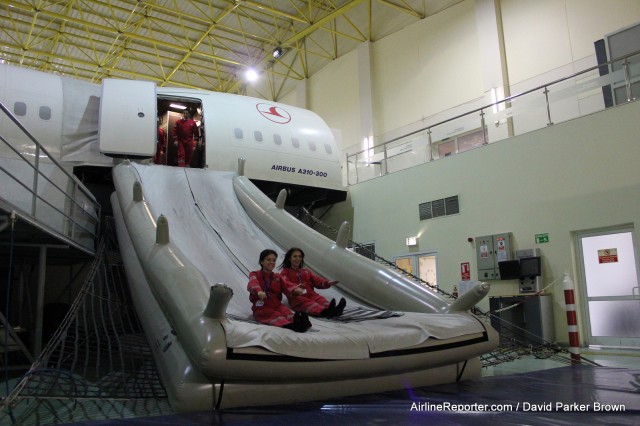 New flight attendants practicing their stuff. Notice the “A310-300” marking on the side of the fuselage.

During our tour there was a training class that was in the Airbus A320 practicing fire evacuation and then another class coming down the A310 slide. I would say that about half looked comfortable coming down the slide; the other half was still getting used to it – all part of the process. 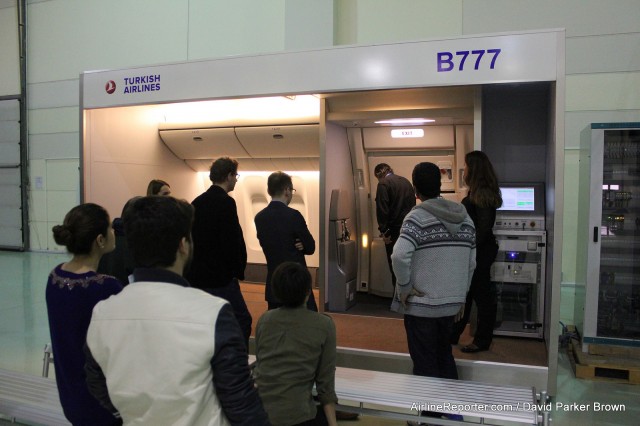 Our group even got the chance to try opening and closing the door to a Boeing 777 and deploying the slide. Although there was no real slide there, a real sound effect was played. Although the doors are huge and heavy, it is relatively easy to get them open and closed. 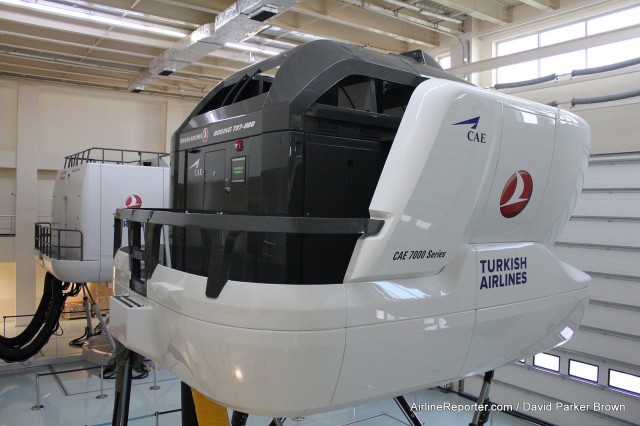 One of the Boeing 737-800 flight simulators for Turkish Airlines 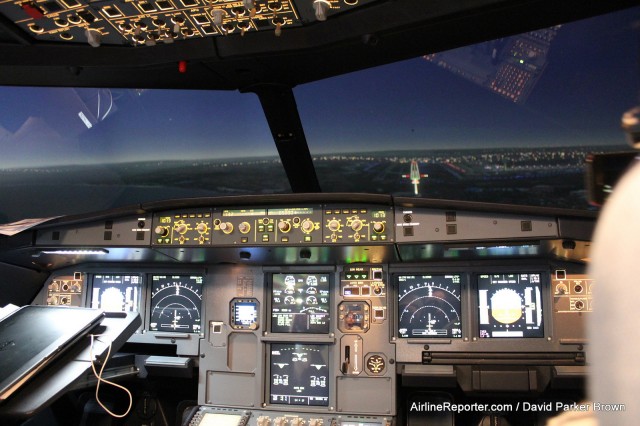 Taking a flight in an A320 simulator

One of the problems with taking flight simulator tours is they are normally all in use. Luckily for us, there was an Airbus A320-200 flight sim, made by L3 COM (formerly THALES), open with a trainer inside to show us what it could do. The graphics of this flight simulator were probably some of the best that I have seen – which makes sense since it was almost brand new. 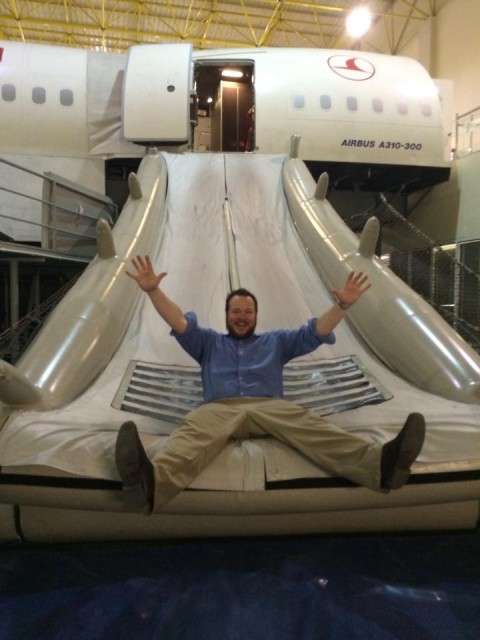 Okay, I didn’t really slide down, but I did make this pose

On top of the other training, the airline also has their Flight Academy, teaching new pilots flying basics, up to being a flight instructor in real aircraft. They operate a fleet of aircraft including 10Â Cessna 172s, twoÂ Diamond DA 42 Twin Stars, and twoÂ Mustang Citation Jets.

A great tour and facility, if only I was able to stay longer. Next time – hoping to actually slide down a slide.

https://www.airlinereporter.com
The Lockheed L1011 – Saying Goodbye to Another Trijet
Is Delta Angering Passengers in Seattle Over Bag Tags?
1 Comment

A Wonderful report, David and thanks. If you had consulted your associates, before hitting ‘publish,’ it would have so much better. Thanks and the pix are great. When the pix are as good as these, they can often carry the weight. Great post! -C.