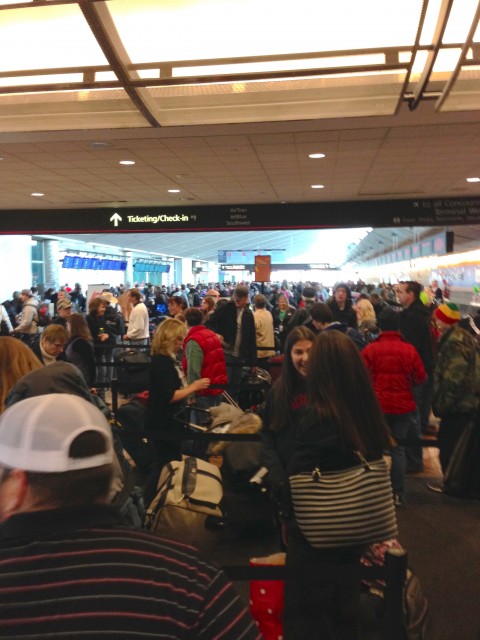 We arrived at the airport early, well aware of the holiday madness.  Despite being prepared, the lines for Southwest were insane.  Our line snaked around stairwells, past restaurants, and in front of a competitor airline’s counter. We almost thought it was a joke.  Despite a line that looked like waiting for Super Bowl tickets, we were through and processed in only 35 minutes.  Checking in online helped a lot (though there was no special line just for bag drop initially, it split about halfway through, to our benefit).  I can’t fault WN too bad, as they had every station open and lots of staff “working the lines.”  It was just a crazy time of year.

By comparison, security was an absolute breeze.  My favorite part of traveling with young kids is avoiding the nude-o-scope; TSA lets families with young kids go through the old-school metal detectors.  Soon we were on Denver’s Concourse C and looking for a late breakfast.  I’m not gonna lie – my wife and I drank draft Colorado IPAs while the kids ate pancakes. 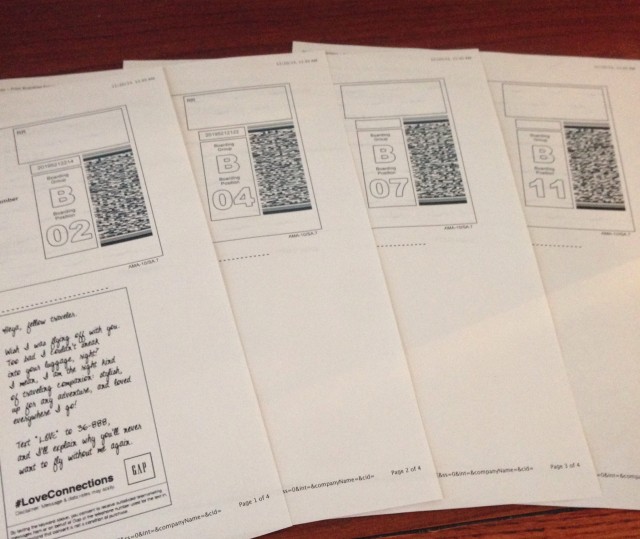 Despite a delay of our inbound aircraft (which Southwest failed to acknowledge at any point, even announcing an “on-time departure” despite no plane) boarding was relatively stress-free.  My biggest apprehension about flying Southwest is the lack of assigned seats.  As an elite with United, seat selection is rarely an issue.  For this flight, I was really worried.  I didn’t want to get separated from my four-year-old son during the flight (well, maybe just a little).

Despite my concerns, Southwest lets families with kids under age 4 board between groups A and B.  I guess I’m hosed in three years, when the kids will be 7 and 5 – ’cause that is a totally appropriate age to have to risk flying without your parents.  This is where I just don’t get the Southwest boarding system.  Despite the assurances that we’d all board after group A, I still checked in at exactly 24 hours out, hoping for an even better position.  While we were all on the same reservation, our boarding numbers were a few apart for each of us.  We ended up with B2, B4, B7, and B11.  I’d say maybe the IT-backend needs some work. 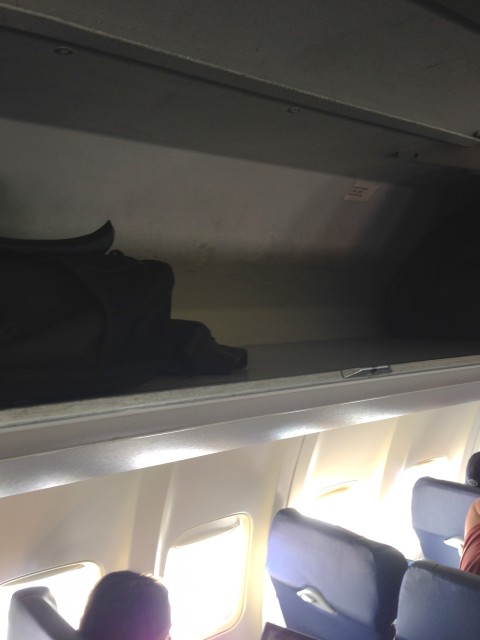 On board, I didn’t have much to complain about.  The seat pitch was tolerable (I’m 6′ tall) and there was an abundance of overhead bin space – I guess that’s what happens when you don’t charge people to check bags.

This was my first flight with the new personal electronic devices (PED) policy in place, and, let me tell you as a parent, it’s a lifesaver.  While my kids are not addicted to technology, airplane flights are one instance where I’m more than happy to pop that electronic pacifier in to calm them down.  In the past, we’d board, wait for boarding to conclude, wait for pushback, wait for taxi, wait for takeoff, and wait for 10,000 feet.  A good 20-30 minutes usually.  Then we’d repeat it on the descent.  For a two-and-a-half hour flight to LA, that’s a lot of time.  For those of you with kids, you know they don’t excel in patience, so the new PED policy was a blessing. 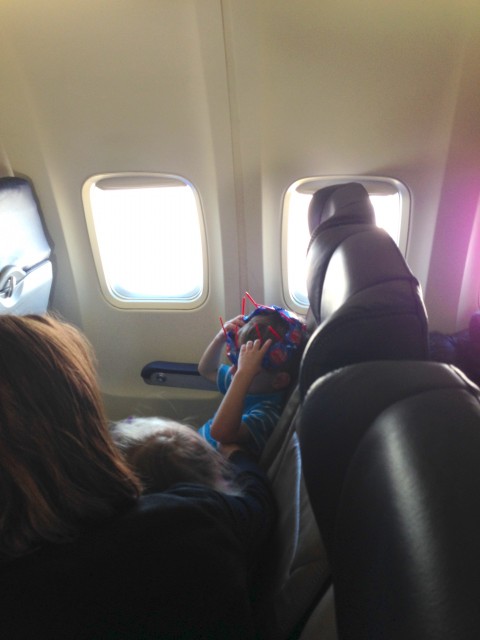 En route, the flight crew provided efficient, friendly service.  There was plenty of “kitsch” during announcements and such, which I find tiring and cheesy, but Southwest is known for it.  However, they were wonderful with my kids.  It was my son’s 4th birthday, and the flight attendant made him a “crown” of bagged peanuts and stir sticks.  I have to imagine that the flight to Anaheim generally has a high family load factor.  Our flight crews (both directions) were very family-friendly; they took great care of the kids, and knowingly offered me a “double” when I ordered a drink.

Overall, my family flight experience on Southwest was just fine.  If the price and schedule are right, I’ll fly them again.  But as an anxious guy, the uncertainty of the “Southwest experience” is a challenge.

Hey just FYI, you can pay $12.50 per flight to book yourself Early Bird, which will put in you in the back of the A group or front of the B group. $25 per round trip to make sure you get a good seat. Southwest has found some creative ways to generate fee revenue without sticking it to their customers. This is an example.

I fly SWA all the time, probably about once a month. I only fly SWA if at all possible. Still the best after all these years IMO