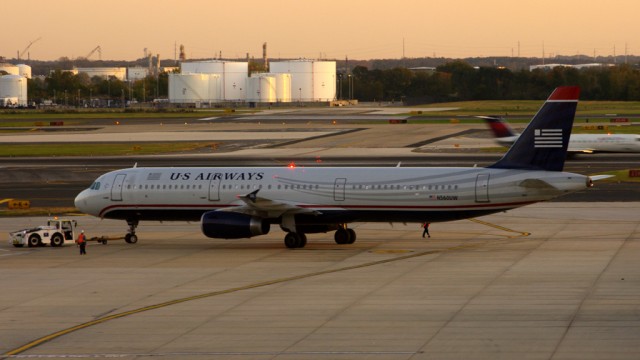 With most Boeing 757s heading toward the end of their life cycles, airlines are moving forward with plans for more fuel-efficient aircraft that can hold similar amounts of passengers over a decent range.  The most popular option at the moment is the Airbus A321.  Having never flown one myself, I was excited to have an opportunity to test out this aircraft on a recent flight out east. I wanted to see first hand how the newer A321 stacked up to the (soon-to-be) classic 757.

At the moment, the only current operatosr of the A321 in the U.S. are Spirit and US Airways; however JetBlue and American Airlines have received their first ones and Delta, and Hawaiian have plans to expand their fleet with the A321 in either CEO (Current Engine Option) or NEO (New Engine Option) flavor.  In some cases, these aircraft will replace 757s, such as with AA; however, some are just for expansion as with the case of JetBlue & Hawaiian.

My first-ever flight on an Airbus A321 was with US Airways, travelling from Phoenix to Washington DC’s Reagan National Airport.  Not only would this be a new aircraft for me, but also a new airport (Phoenix) and a new airline (US Airways). Hee-haw, I was down for the AvGeek newness tri-fecta. 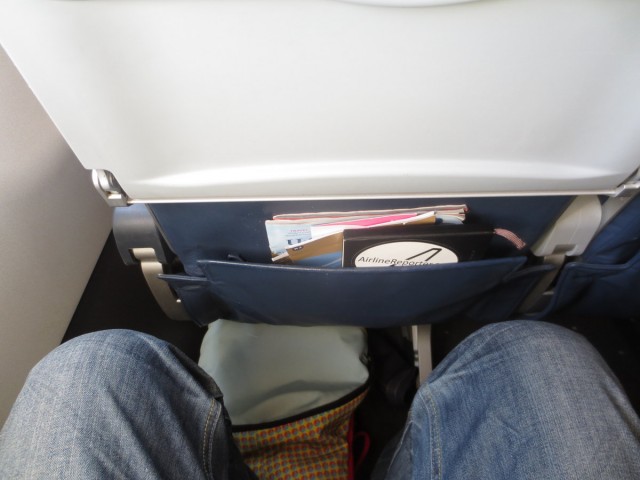 The legroom on a US Airways Airbus A321 is not all that bad – Photo: Mal Muir | AirlineReporter.com

Unfortunately my flight didn’t start off all that well thanks to my delayed flight in to PHX, but I made it onboard (and so did my bag).  I boarded the aircraft through door 1L and headed towards my seat in economy.

One of the first big A321/B757 differences that I noticed was in boarding process. The A321 boarded through door 1L while the 757 often uses 2L.  Seeing such a large aircraft boarding through the premium cabin is always a bit of a fun experience.  Having flown both 757-200s and 300s this year, the A321 felt roughly the same inside as the 757-200; you could easily mistake the same (long) aircraft as the narrow-body configuration feels the same.

Looking out the window is the dead giveaway as to what you’re flying, as the majority of A321s you are going to see are, at the moment, fitted with Airbus’ iconic wingtip ’œfences’ (though new aircraft should come fitted with sharklets).  757s come either with a retrofitted blended winglet, or none at all.  The difference in looks from the outside is also in the nose.

The A321 uses the same family nose as the A320, A319, & A318 and stands out as a little bit boring compared to the 757, in my opinion.  It just looks like someone took an A320 and pulled on either end to stretch it out.  The 757 has that wonderfully sunken flight desk from the rest of the aircraft look that I love. Cosmetic differences really don’t matter that much – it should be about the inflight experience, right? Well, maybe to some. 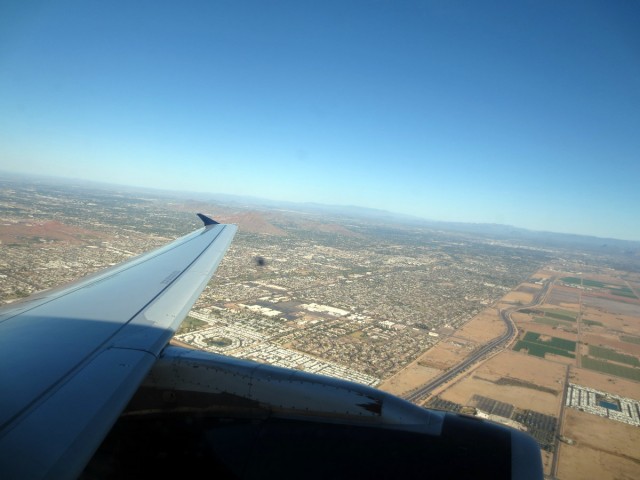 Looking out the window of an Airbus A321… looks like any other A320-family bird to me – Photo: Mal Muir | AirlineReporter.com

Onboard, the aircraft it feels like any other A320-family aircraft.  The same overhead panels, bins, lights, and vents.  Slick, clean, and modern, my A321 was only delivered in 2011, and it paled in comparison to the age of some of the 757s out there, which may be as old as I am.

While the first A321 was delivered to Lufthansa in 1994, the bulk of them have been delivered after the 757 went out of production in 2005.  Each carrier is going to be different on the passenger experience, but on average, flying on a relatively modern A321 is going to be better than an older aircraft.

There was no ground-breaking technology or many entertainment options on my US Airways’ flight.  My flight did offer GoGo Internet and I took advantage of it during my four-hour flight.  I couldn’t complain one bit about the service onboard either as there was multiple rounds of drinks (especially good for a coffee nut like me). 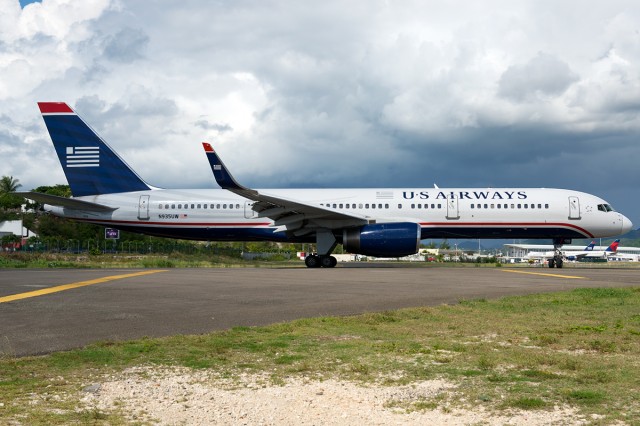 A US Airways 757-200 (with winglets) on the ground at St. Maarten – Photo: Bernie Leighton | AirlineReporter.com

I had come into this flight thinking to myself that it would be some mind-blowing new experience and that I could easily say that the A321 would be a fantastic replacement to the 757’¦ but I can’t say that.  Even a side-by-side comparison doesn’t help all that much either:

In looking at the numbers, the 757 is superior to the A321 in most measures (except for cabin width, and, well, definitely not in fuel economy), so why replace it with this aircraft? Well, honestly we’ll need to compare the 757 to the A321 NEO, but the problem is that the data on the NEO isn’t fully known yet.

The information that has been touted suggests a range increase of only 500nm, still a good 400nm short of the 757.  Clearly not going to cut the mustard on range, but does it really matter?  The A321 has plenty of legs to make (like LAX/SFO – JFK), that many 757’s currently fly on.  What the A321 can’t replace is the low-demand transatlantic routes that the 757 is utilized for by carriers like United and Delta. So what is the real replacement, if there even is one?

In the end, the A321 is a great domestic replacement option for the long-in-the-tooth 757.  Carriers like US Airways and American are obviously happy with the economics and capabilities of the plane, but how each airline configures their replacement planes will likely be more important than the plane they choose for most passengers.

Great article BigMal. I’ve found the US A321 seat width to be slightly wider than the last 757 I was on (Delta to MSP). Also, the US A321 had a mid-cabin lavatory and separator (flight attendant sitting in the middle). Both are lonnnnng aircraft when you’re sitting near the back.

The 757 was designed to replace the 727 and has remarkable short field capabilities and a more powerful engine.

Also, the identical cockpits of the A321 compared to the rest of the A3XX series (more engines for A340 obviously) makes is more interchangeable for pilots.

Glad to see I’m not the only one who flies economy here. 🙂 I wonder how long its been since DPB flew economy??? 🙂

Still, BIG differences in these airplanes. Ten years fresher engineering, 757 was almost new/fresh design to replace another Boeing product while A321 is a competitive stretch of the 320 freshly designed to burn less fuel. Both are very long and the A321 especially is prone to tail strikes without extreme care. While the A319/320/321 do share a common type rating, a pilot that flies the A321 like an A321 will have tooth marks on is southern parts very soon. In short, competing airplanes that do not really compete. If the A321 NEO edition delivers on fuel burn promises, the older B757 will be retired even faster. There is some rationale and justification for the above. On a personal preference note, I’ve always been a Boeing guy excepting the 757; I’ve just never warmed to it as A self-loader and thought it was a Plane Jane airplane, designed and produced without much thought. I’ve never liked the Airbus line yet find the A320 series self-loading experience superior to the B757. If you understand that, please explain it to me .

I worked for US Airways express, Piedmont airlines for 4 years, flying the Dash 8 (The few the proud the turboprop crowd). During that time i did my fair share of commuting to work, often flying on the A321 and 757. Looking at internal computers I have often seen problems with the A321 in hot weather conditions specifically in the Caribbean. US Airways would routinely schedule a flight in the A321 from St. Thomas or St. Maarteen to Philly or Charlotte, due to the temperature and runway it would be planned for a scheduled “diversion” to San Juan PR to refuel and continue on its journey to their destinations. When the 757 was scheduled it would fly direct non-stop to its destination. In my opinion and 12 year aviation experience, the 757 could never truly be replaced by the A321. Possible when the A321NEO comes out with numbers I may change my mind. But I’m a Boeing guy all the way.

I’m posting this here just in case your other readers are having the same problem.

Starting a few weeks ago, inline photos in my email subscription to this blog no longer appear (in Chrome there is a place holder with a page symbol and when I try to “Save image” it tries to save an .html file) and in Firefox there is no image and no place holder at all.

I even went back to some of the saved emails of the blog and the photos that once appeared in line in the email are no longer there.

Have you changed something?

Thanks, and keep up the good work. I certainly enjoy it.

I’m surprised that there was no meaningful technical performance comparison. In general, the A320 family flies lower and slower than the 757. I’ll miss those cold weather lightly loaded takeoffs in the 757, that much is for sure.

I am not a huge Airbus fan, but I admit, it’s because I’ve only flown them on US Air. The cabin crew was fantastic, but on long flights I’m most peeved about a complete lack of IFE. I flew an outbound leg to KLAS on United, had a 757-200 out of Dulles. It had center spaced TV’s and phone jacks…ok, I can deal with that. The whole way back, inclusive of the A321, no IFE. Past the whiney stuff, they both got me there.

Lack of IFE is really an airline issue, rather than an airplane one. We have A321s with IFE, and some without, depending on which routes they’re for. All of our 757s are now gone, alas, other than through Openskies (I work for BA).

This flight 448 from slc to nc was the worst flight in all 45 years I have been flying back east. One time with US Airway , flying home from Ric to Phl , Slc Feb 11th and unless something short of a miracle , it will be my last. Back to United !