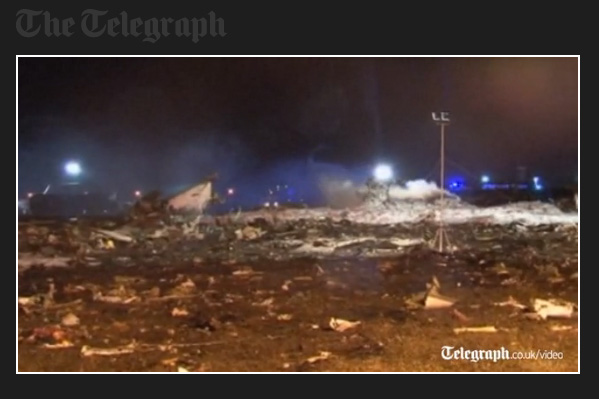 Screen shot of a video taken at the crash scene. Click to via video on Telegraph.co.uk

The weather at the time of the crash had light rain and winds.

One of the passengers on-board the aircraft appears to be the son of the Governor of the Republic of Tatarstan.

Boeing has released the following statement: “Boeing extends its deepest condolences to the families of those who perished in the Aircompany Tatarstan Flight U9-363/2B-363 accident on landing in Kazan, Russia, in route from Moscow. A Boeing technical team will launch to provide technical assistance to the investigation at the request and under the direction of Russia’s investigating authority, the Interstate Aviation Committee. In accordance with the international protocol governing aviation accident investigations, all inquiries about the investigation must be directed to the NTSB.”

Last time I checked, which was yesterday when I flew a 737… it didn’t have a prop on it.