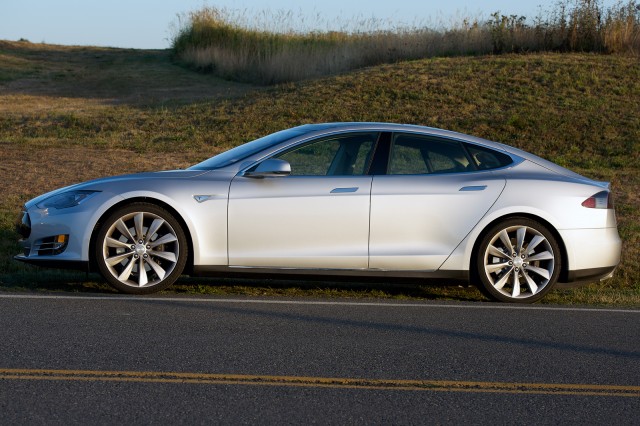 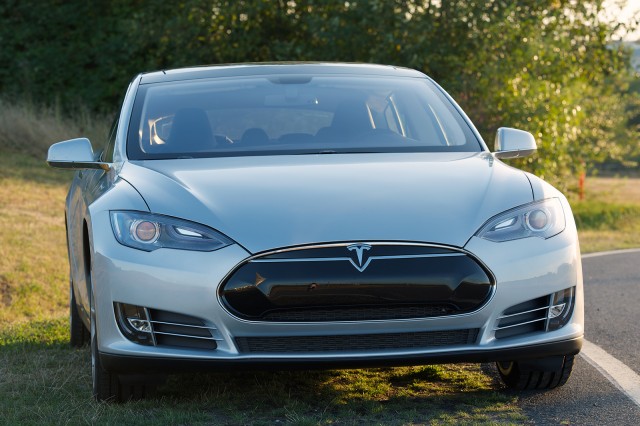 The same Tesla, but nose on. Photo: Bernie Leighton | AirlineReporter.com

When we look at the bigger picture, the fires with the Tesla aren’t that big of a deal. There are 20,000 Tesla Model S cars in service; one fire affected 0.005% of the in-service fleet. Ignore, for the moment, that if you punctured the fuel tank of a regular car and exposed it to heat and oxygen, there would be a catastrophic inferno that would obstruct traffic (and endanger the driver).

Also note that the National Fire Protection Association shows in their most recent study that there was an average of 31 vehicle firesÂ per hour. At that rate,Â they concluded that vehicle fires caused at least one fatality per day. When their last study was conducted in early 2012, the only electric vehicles on the road were gas-electric hybrid cars.

Unfortunately, there was recently a second fire in Yucatan, Mexico. The driver jumped what looks like a very steep curb, and the battery compartment was punctured. User error caused a minor and controllable blaze. Okay, 0.01% of the total in service Tesla fleet had been affected – but that is still an insanely hard to imagine number. A statistician would call such a result insignificant.

Finally, there was a repeat of the first fireÂ – but this time in Smyrna, Tennessee (ironically home of the all-electric Nissan Leaf). Even at this point, only 0.015% of the Tesla fleet had caught fire due to circumstances not related to the car. But many were sensationalizing that all the Tesla Model S were fire traps (sound familiar, Dreamliner fans?) The stock price was falling, and the government, probably because of media attention, said that they would “review the incidents.”

To Tesla’s credit, they have come out in front of these calls by demanding the federal regulators investigate as soon as possible. Elon Musk, the founder of Tesla, expects them to find nothing out of the ordinary, and is still Â affirming that the Model S is the safest car ever made.

What tipped me over the edge/gave me this idea was when one friend compared my car to the 787!

In many ways, I appreciate the (intentionally derisive) comparison. I see it as a compliment to both vehicles! Both are revolutionary in their approach to how they perform their tasks, use more electric power to do their job than any previous iteration, and use lithium-ion batteries, which seem to be the center of almost all the controversy. Both are also media darlings for all the wrong reasons. 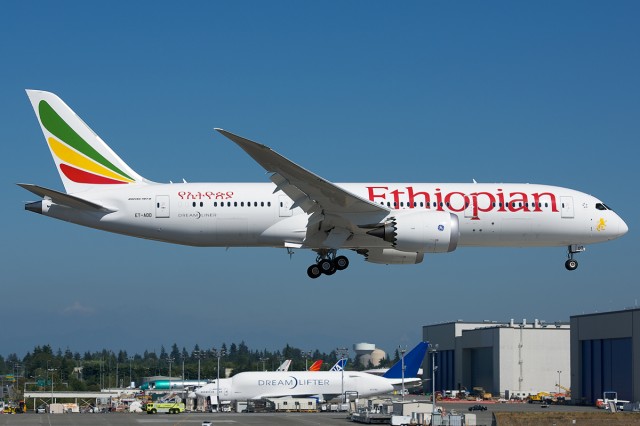 The 787 has 50 amp hours of battery that discharges at 32 volts. Enough to start the APU four times before it needs to be recharged. The Tesla uses thousands of Panasonic 3.4 amp hour cells to make up its battery “skateboard”. In terms of pure overall capacity, the Tesla’s battery is larger. In terms of current discharge per second, the 787’s is the winner. Electrochemically speaking, the batteries are almost the same.

The 787 battery thermal overrun in Boston was, in some ways, a similar situation as what would happen if you punctured the battery pack of a Tesla whilst simultaneously shorting it out. There is one difference, however. There were 55 787-8s in service when that happened, which was 1.8% of the total fleet. That’s closer to statistical significance than the Tesla fires. There was an incident that led to slide deployment with an ANA 787 (that was a thermal overrun). A scary thermal overrun, but not technical combustion. Other than the possibility that something similar might have happened with a Qatar 787 in Doha, that JAL fire in Boston was actually the only battery fire. The Ethiopian fire was caused by the ELT, a Honeywell product and it could’ve happened to any aircraft equipped with that model of ELT; bad luck caused that fire. 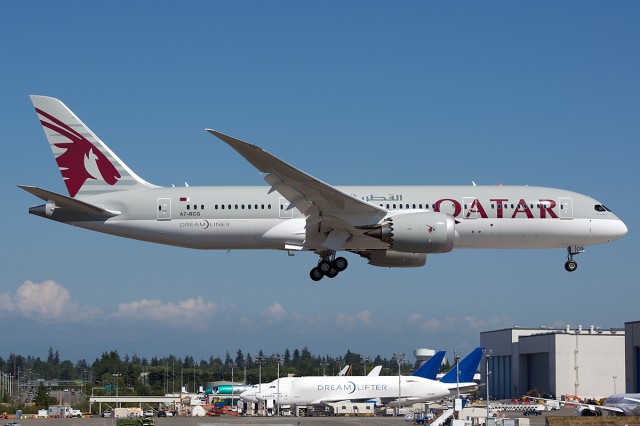 It’s time to put some battery facts into perspective, for both products. The Model S actually has a larger battery (in terms of capacity) than the 787, even at the 60KW model. They are only replenished through charging, after all. The 787, in flight, is capable of generating around 1.2MW of power which is more than enough to power every aircraft system as well as charging its battery. The battery itself is mostly there for redundancy and kicking enough amperage to the APU to crank it into action. This would make for a great AEW&CS aircraft, but that’s not the point. The point is that both products are getting extreme scrutiny for deviating from the norm.

The bleedless electrical system on the 787 is just a smarter way of doing things; it actually increases engine efficiency as no air has to be bled off from the jets to run pneumatic systems. This change also simplifies maintenance procedures, miles of tubes and valves were replaced with easy to inspect, repair, or replace wires. Even the electrical panels have been simplified. When speaking to some aviation maintenance professionals qualified in the repair of 787 electrical (and formerly bleed-air) systems, they say things like “the engineers finally asked ‘how can we make this better?'” It is new, it is (currently) unique, and I understand that can cause apprehension. 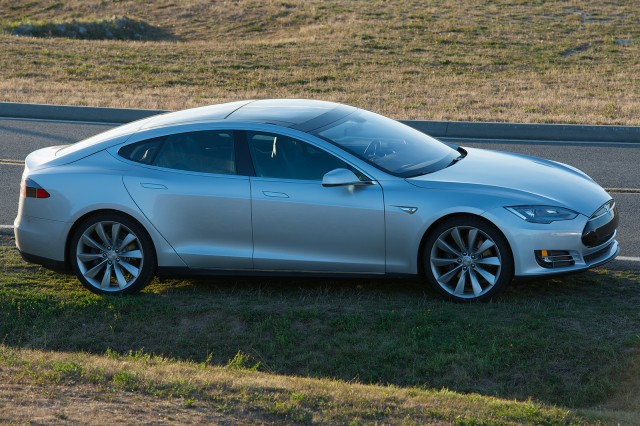 The Tesla Model S, unlike most cars on the road, does not put its driver a few feet from explosions. It seems, however, that sitting on a combustable liquid, near its combustion, has become so routine that when it fails, no one cares.

Even if you are responsible for your Model S burning, the warranty will replace it. Insurance rates will not rocket up, nor will owners have to worry about losing a sizable asset.

In the case of the 787, things get a little more complex, but the point is more or less the same. Aviation is a safety-focused industry. Most passengers have absolutely no idea just how many things are checked, repaired, and rechecked before a simple pushback – with absolutely no news. I suppose “plane gets a tire change prior to pushback, departs on time” is not a good headline. Even non-787 diversions get almost no attention. For every other aircraft “Passengers arrive safely with a slight inconvenience” doesn’t seem to raise any eyebrows.

It really blows my mind some times. “Ominous” noises, “lavatory malfunctions” and “warning lights” on the Dreamliner will make national news. But why?

BONUS:Â Airlines Are Safe. Why Do They Get Picked On? Letâ€™s Compare Statistics

Then again, I suppose no one would want to read thousands of articles a day about how the 100 787s or 19997 Tesla Model S in service safely arrived at their destination.

The Tesla Model S is one of the safest cars ever produced, and it catches fire at a rate well below the statistical average for vehicle fires. I am sure with time, the Boeing 787 Dreamliner will also prove to be one of the safest aircraft ever made.

So until something truly happens about the Telsa or Dreamliner, how about we give it a rest?!

Very interesting stuff. This is the first time I have ever even considered, let alone wanted, an electric car, but after reading more about it, I want one.

To wit:
“To Teslaâ€™s credit, they have come out in front of these calls by demanding the federal regulators investigate as soon as possible. ”

This claim has already been refuted by the NHTSA as false.